On February 13, 2020, the Supreme Court nullified the election of the Bayelsa State Governor-elect Chief David Lyon, and his deputy, Sen. Biobarakuma Wanagha Degi-Eremienyo. The Supreme Court upheld the decision of a Federal High Court sitting in Abuja, which held that Biobarakuma submitted false information to the Independent National Electoral Commission (INEC) in his form CF001.

It will be recalled that prior to the November 16, 2019 governorship election in Bayelsa State, Chief Degi Eremienyon Biobarakuma precisely on September 18, 2018, voluntarily deposed to an affidavit before a notary public Stanley Dama-bide & Partners, wherein he stated that “I, Chief Chief Biobarakuma Wanagha Degi-Eremienyo…hereby depose on oath as follows:

“1. My name at at birth is Biobarakuma Wangagha Degi and same reflected in my official documents at the earlier stages of my life”. To show the falsity in the certificates the middle name he claimed as his name (WANAGHA) and his middle name at birth (WANGAGHA) are completely different.

See the CTC of the affidavit for reference. 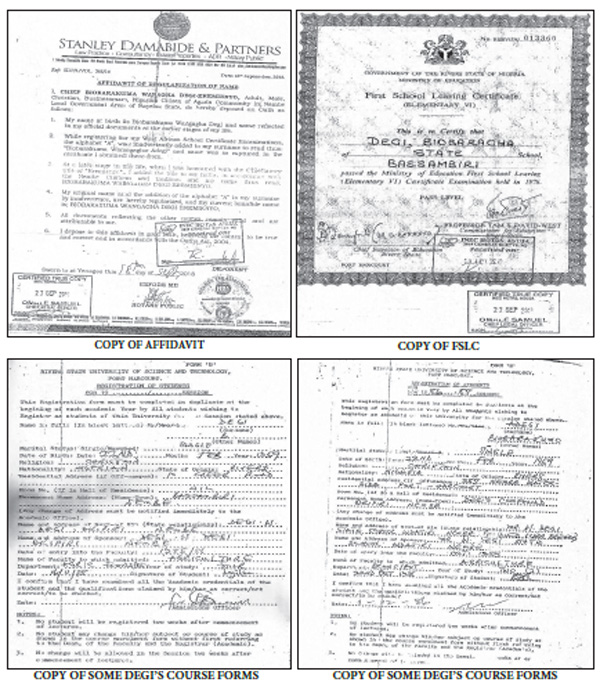 It is important to note that aside from one’s birth certificate, the other official document at anyone’s “early stages” of is First School Leaving Certificate (FSLC). Which means by Sen. Degi’s own deposition, the name that ought to be on his FSLC should be Biobarakuma Wangagha Degi, but the FSLC he submitted to INEC bears Degi Biobaragha, not Biobarakuma Wangagha Degi as he claimed.is this true or false?

See a copy of his FSLC.

Furthermore, in paragraph 2 of the said affidavit, he stated; “While registering for my WASC examinations, the alphabet “A” was inadvertently added to my surname to read thus: Biobarakuma Wanagagha ADEGI and same was so captured in the certificate obtained therefrom”. This means his WASC certificate is supposed to bear Biobarakuma Wanagagha ADEGI.

See copy of the WASC certificate. 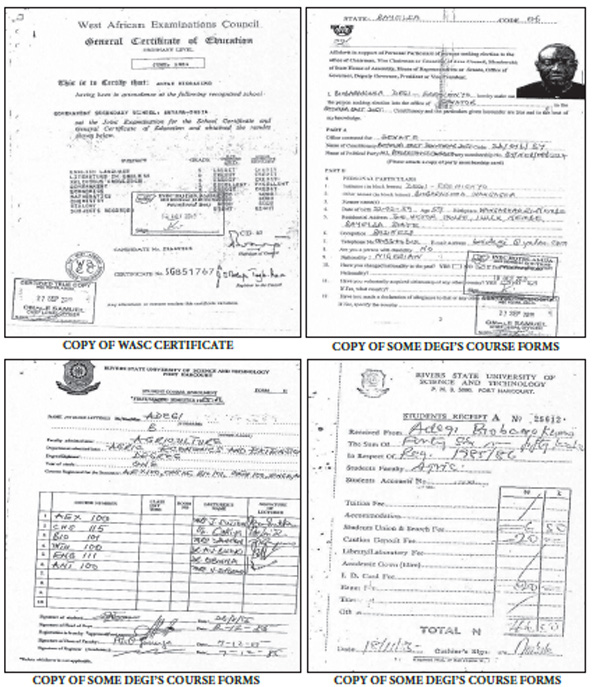 Further investigation is calling to question his first degree because, while this politician would want us to believe that the alphabet “A” was inadvertently added to his surname “DEGI”, changing it to “ ADEGI”, copies of the course forms and fees receipts he personally filled and signed as an undergraduate of the department of Agric Economics at the Rivers State University of Science and Technology, showed that on several occasions, he wrote his name as “ADEGI B” or “ ADEGI BIOBAR-AKUMO” which ever pleases him.

See copies of some of his course forms.

From the above, his first degree ought to bear Adegi Biobarakumo or Adegi B being the name of the person who attended the university.

But the CTC of the degree certificate submitted to INEC bears the name DEGI BIOBARAKUMO which is different from all the name in all the forms completed as a student.

See CTC of his degree certificate. 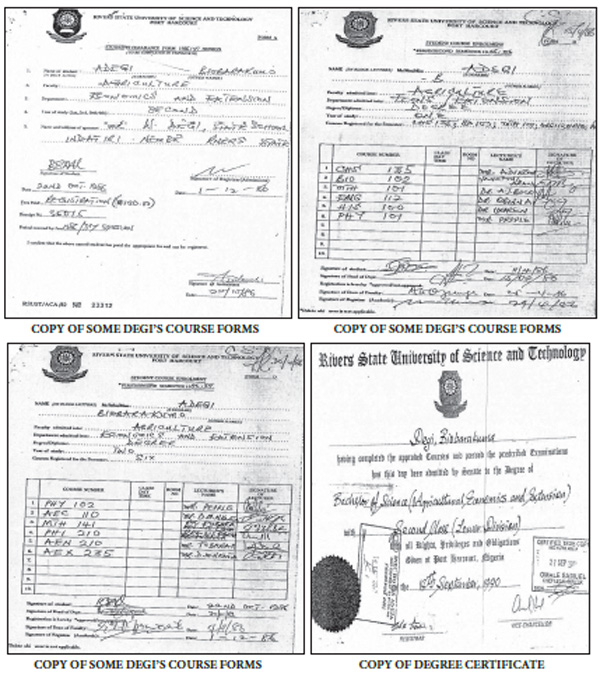 From the foregoing, can any reasonable person say that there’s no falsehood and that the Justices of the Supreme Court and the judge of the Federal High Court were not correct in holding that the APC deputy governorship candidate did submit false information to aid his qualification to contest the election?

Some uniformed minds, including the APC deputy governorship candidate, have argued that these fundamental discrepancies and errors have been cured by the several conflicting affidavits he deposed to, and the newspaper cuts he made.

While we’re not entering judgement, the truth is that nobody can use an ordinary affidavit, apart from a deed poll and attestation from the issuing authority, to correct errors in a certificate.

Another question that is begging for answers is that why would Sen. Degi wait for 42 years before deposing to affidavits and making newspaper cuts on 20th July 2018, another affidavit on August 9, 2018, and, again, September 18, 2018 – all prior to the 2019 general elections to correct errors in his certificates of over 30 years old. Nigerians should judge.