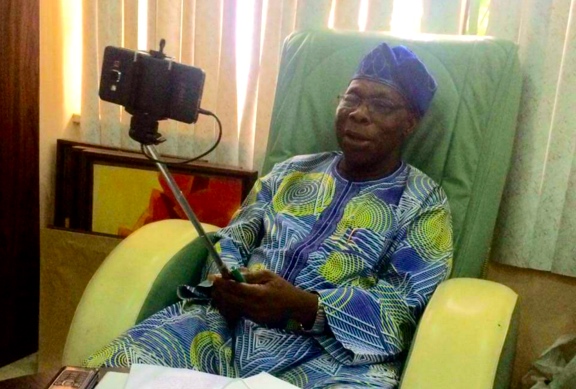 Former President, Olusegun Obasanjo, was on Saturday awarded a Master’s Degree in Christian Theology by the National Open University of Nigeria.

Obasanjo was among the 10,653 students who were awarded degrees in various academic fields at the institution’s 5th convocation ceremony held at its permanent campus in Abuja.

About 15 of the students graduated with First Class Honours.

Obasanjo had enrolled for the Master’s in Christian Theology after earning a first degree in the same discipline from the university.

Others who graduated with him include the Emir of Hadeija, Adamu Maje, and paramount ruler of Agwu, His Royal Highness Felix Asad.

Obasanjo had graduated with a pass in Christian Theology with a GPA of 4.25 from the Abeokuta Centre of the institution.

He is expected to continue his PhD degree at the institution, according to the Vice-Chancellor of NOUN, Prof. Joshua Tenebe.

“It is interesting to know that former President, Chief Olusegun Obasanjo, will be graduating with a Master’s Degree (MA Christian Theology) having  met the requirements for the award, during the convocation. Having been given admission to study MA/PhD in Christian Theology, Chief Obasanjo will continue with his PhD fully,” he said.

Tenebe commended the administration of President Muhammadu Buhari for releasing funds through the Tertiary Education Trust Fund for the construction of structures at the university’s permanent site.

He also appealed for more funds to be able to adequately equip and furnish the completed projects.

He said, “Mr. President, Sir, NOUN remains ever grateful and very appreciative for the special intervention that ushered us into our promised land today. If we have judiciously and effectively utilised the funds given to us in record time to complete the projects, then we are sure that the Federal Government will grant us more. We need more funds to adequately equip and furnish the completed projects.

“We also need to build more structures that will house so many other schools and departments of the University. There is need to complete the road network and completely landscape the University Village as a project. We are very thankful because we are confident that our request will be granted.”

Buhari, represented by the Executive Secretary of the National Universities Commission, Prof. Julius Okojie, said that education remained the most important sector that defines the life, values, political culture and economic power of a nation.

Other prominent Nigerians who graduated include the over 70 years-old retired Naval Officer, Rear Admiral Orissa who graduated with First Class in Mathematics; 78 year-old Chief Femi Balogun, the Mayegun and Tunwase 1of Isara, who graduated from the School of Law; a blind student, and Mr. Obinna Bede, who bagged B. Ed English from Abuja Study Centre.