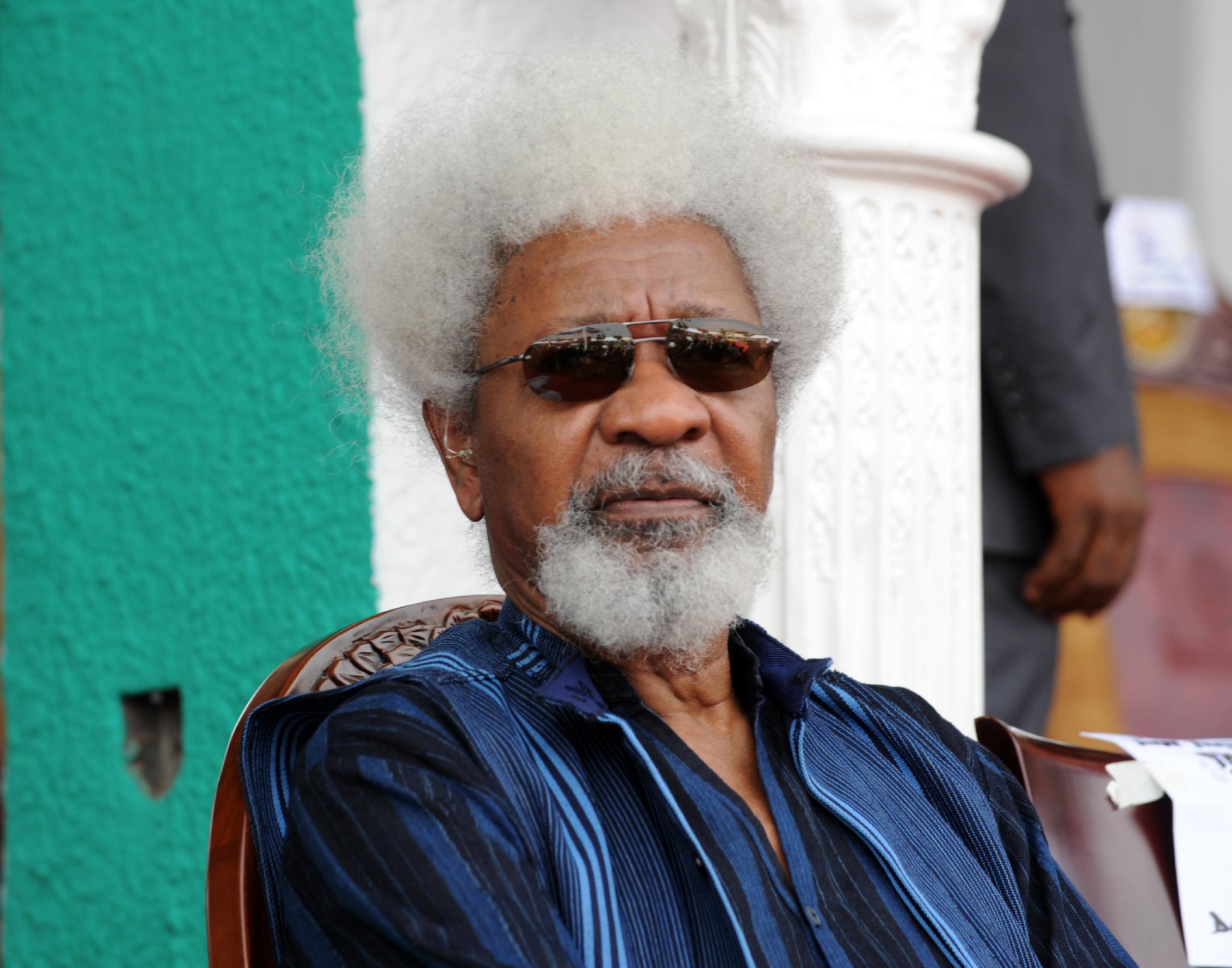 Professor Wole Soyinka was quoted saying his latest book is the “nastiest” that he has written so far. Inter-inventions: Between Defective Memory and the Public Lie – A Personal Odyssey in The Republic of Liars (Ibadan: Bookcraft, 2015, 136pp) is quite close to being just that. But who knows if an even nastier book may follow as Soyinka embarks on the task of exposing lies in our Republic as he has promised that InterInventions, a follow up to Interventions series (I-IV) will be dedicated solely to the dismantling of lies in the public space: malicious and non-malicious lies, lies told, lies magnified, lies fraudulent, murderous lies, accidental lies, uttered from depraved minds whose sole intention is to create burdens for their victims, malign, impugn and lower the other so they can be raised or their stomachs can be nourished at other’s expense.

This is nevertheless, a publication in which Professor Soyinka settles strictly personal scores, but this is no pamphleteering that he modestly alludes to, but a fine, extended essay in the distinguished tradition of that form. He is polemical, punchy and critical – without mercy or measure! There is no deceit, no pulling of punches, not much of deliberate concealment; it is Soyinka wielding a Bazooka in one hand, and a gilt-edged knife in the other, shooting down the hypocrisy and pretensions of representative figures in a Republic of Liars, where defective memory, an affliction worse than amnesia, but much closer to dementia, and psychosis, is standard fare. He deploys language dramatically and draws blood even if his mood remains charismatic and entertaining as he laughs at human folly, and the verminous antics of his named and shamed traducers.

The writer focuses on his personal experiences as a victim of the burden of being lied to, being lied against and being pushed to defend his right not to be lied against, but his theme is probably far more important than his content and mood. He ends up inviting us to think further about a social malaise, a missing, distorted, disjointed ethical link, and so his subjects – including Obasanjo, Chinweizu, Adewale Maja-Pearce, Peter Enahoro, Major Salawu, Gbenga Daniel, Abiola Ogundokun, Olagunsoye Oyinlola – rise off the pages, as illustrative archetypes of a hydra-headed crisis at the heart of society, namely how self-delusion, ego, power and an obsessive, compulsive, alimentary propensity turns adults into liars. Other associated themes along this line of moral exhortation will include the sheer uncertainty of life, the unpredictability of human character, and the near-helplessness of victims in a nation of fabulists.

Thus, the entire narrative is organic, with the humanistic import of the content, imbued with a personal orientation as it were, taking us closer to larger questions of ethics, humanity, the inviolability of truth. Man and his foibles is the central subject of inquiry invariably; there is a certain universality in the tendency of man, including those who quote the Bible with practised ease, to be nasty and brutish. I recommend this book for everyone’s reading pleasure and instruction. It is quite affordable, only N1,000 per copy, and certainly, a temptingly quotable book – more so as the reader is reassured by the author’s statement of indemnity. Here goes: “My publishers are hereby fully indemnified by me against court processes, as well as the consequences of any libel suits that may arise from this maiden number of the InterInventions series” (p.93). The stoutly flagellated figures in the book, who are described as “the greatest public liars I have ever known”, thus ridiculed have every reason to be angry but obviously, Soyinka in taking his pound of flesh cannot be bothered.

There can be no greater denigration to be sought beyond his depiction of former President Olusegun Obasanjo, as the philosopher-king who is “an overgrown child of circumstance;” “Double-O-Seven”, “an infliction”, “a hypocrite”, and “irredeemable egomaniac” or Chinweizu as “Chichidodo”, a bird that feeds on shit, or Adewale Maja-Peace as “the area-boy of letters”; or Peter Pan as “lying, opportunistic, contemptible”; Olagunsoye Oyinlola as “the Prince of Darkness”; Gbenga Daniel as “DaaniElebo”. Professor, ki lo de? Or when of Maja-Pearce, whom he calls “Ade-Boy!”, the writer says: “It is a time to remind him that the stern rod of Ogun awaits all lying tongues.” (p.38). Professor, ewo ni t’epe!Of Abiola Ogundokun, Soyinka thunders: “Of all the loathsome lumps of slime that ever oozed from the sump of human depravity to aspire to human form, none comes close to the two-legged parasite that goes by the name of Abiola Ogundokun”. Whaa-a-t? And in taking on Major Rasaki Salawu, he says “Howu Salawu” – a vocalic alliteration which cryptically summarises the subject-matter; a considerable part of the book is devoted to a profiling of the self-same Salawu in a manner that evokes shame or the equivalent of a mortal decapitation. Soyinka’s anti-heroes owe themselves a duty to say something in self-defence, for the naming and shaming tends to stick, with all the stamp and authoritativeness of the inimitable WS. Audi alteram partem.

Which is why I was surprised that President Olusegun Obasanjo in a reported interview with The Punch, made light of it:

Reporter: While you were away from the country, your friend Prof. Wole Soyinka inaugurated (sic) a book in which he called you a child of circumstance.
OBJ: (Talking in Yoruba: Se o so be?) Meaning: Did he say so?
Reporter: He even said he won’t eat any food you give him without you eating from the food first.
OBJ: (Continues in Yoruba: Mi o mo o) Ehnhenhn? I don’t know.
Obasanjo irritated by the Soyinka questions, gets up and walks out of his study during the interview…but the reporter keeps throwing questions at him.
Reporter: Why are the two of you always quarrelling?
OBJ: Kini wahala yin? (What is your problem?)

Indeed, what is our problem? But just in case President Obasanjo has not read the book, I recommend that he should especially as Soyinka has promised a follow-up shake down edition: “a collective effort, a corroborative-or self-cancelling-anthology by many long-suffering victims…dedicated solely to the Otta phenomenon.” (p. 53). Our Republic of Liars is a temporary space for Soyinka; his reputation in the world of letters places him historically, in the long run, beyond local dog-fights; but as for this book, emotional responses to the vengeful biographical dimensions cannot be unexpected.

Take-away, though: our problem – we do have a problem as a collective – is the sobering realisation that Nigerians enjoy telling lies, much more than any other community that we know, and that we are indeed, a Republic of Liars. We are a nation of fabulists, richly imaginative, when that asset is well-conditioned, it produces excellence, but misapplied, the tale bearer becomes a professional aproko, as they say, a self-made radio station, transmitter, booster, conditioned to promote untruths, and as the tale travels from one mouth to another, new layers are invented and added, often so viciously that the original source often finds it unrecognisable. But much damage is done, and it is this wickedness of man to man – as theme and principle- that Soyinka deplores.

The rise of the internet has even made lying so easy and convenient, the anonymity that the social media offers allows a lie to grow until its continued affirmation imposes it on public memory as received wisdom. Lies pollute the public mind; they damage relationships and destroy a sense of community. Soyinka insists on the inviolability of the truth and decent conduct, but the rot is widespread, the phenomenon is a new normal reality. Politicians lie to the electorate, win the votes and turn around shamefacedly to say they never said whatever even in the face of concrete evidence made possible by electronic reproduce-ability. This culture of deception remains unchecked because the institutions for seeking redress remain inchoate: libel cases can go on forever, or they may run into a technical hitch concocted by lawyers, requiring that they be started de novo. And to worsen it all, the followership enjoys the lies and the lying, compelling an assessment of our Republic in real and fictive representations as the biggest lie in search of truth.

Soyinka does not recommend a resort to self-help; but he inflicts punishment with his pen, and laments in a memorable instance: “Chei! There is Death o!” Let’s add: “Chei! There is God o!…”– the ultimate judge.