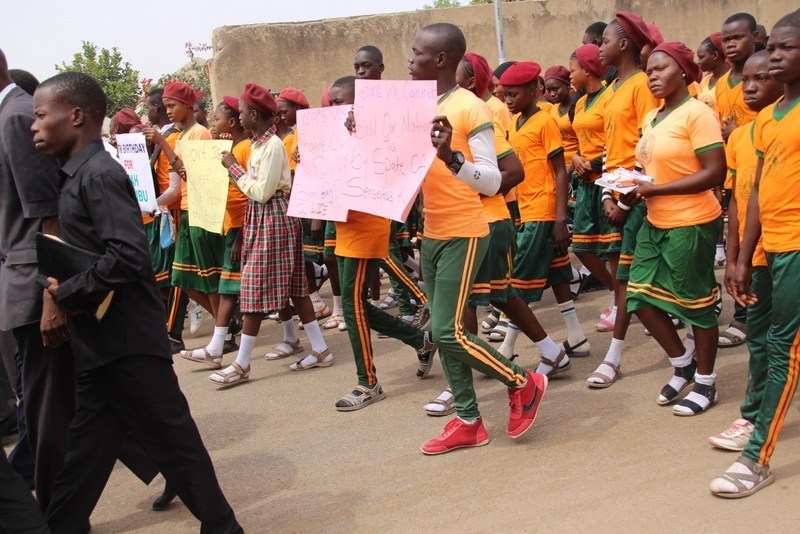 Christian Association of Nigeria (CAN) on Wednesday  held a church service and a  peaceful march to mark the second year of Miss Leah Sharibu in Boko Haram captivity.

In Abuja, CAN President Rev. Samson Ayokunle and the Senior Pastor, Dunamis International Gospel Center, Dr. Paul Enenche, warned that killings in the country could lead to anarchy

Leah along with over 100 girls were forcibly abducted by Boko Haram insurgents from their hostel at   the Government Girls Science Technical College, Dapchi, Yobe State  February 19,2018.  Though her mates were later released, she was  held back for refusing to renounce her Christian faith. There were reports late January that she had given birth to a boy.

The Yobe Christians, who came out in large numbers, prayed  to God for the release of the young girl and later staged a peaceful protest from the EWCA Church to St. Mary’s Catholic Church in  Damaturu.

They carried placards with different inscriptions condemning the deteriorating security in the country  and  calling on President Buhari to   ensure the protection of lives and property.

The protesting Christians  sent a message of hope to Leah and  others  in captivity, including Muslims and  remembered Mr. Bitrus Zakka from Adamawa State, who was recently murdered by Boko Haram.

The state CAN Chairman Rev. Fr. Philibus  Yakubu,  said the Christian community in the state is still hopeful for the release of  Leah .

“They will fight against you, but they will not overcome you, for I am with you. Yahweh declares to rescue you,” he quoted Jeremiah 1:19.

At a  news conference in Abuja to mark the second year of Leah’s  abduction,  Rev. Ayokunle and  Enenche said since the Federal Government was not unaware of the killings in the country, it must take urgent steps to defeat  Boko Haram.

They said it was a shame for a government that has an Army, Air force and Navy to allow the level  killings going on its territory

“The development is a shame and there is a cloud of confusion that hangs over the nation and the people that are   governing  this nation are not doing the right thing,” they lamented.

Rev. Ayokunle, who was represented by  CAN Vice-President, Caleb Ahima, said: “CAN has been calling and talking to the  government and I   think it (government) is obvious of  the persistence of this evil.

“We   call on the Federal Government again that we are getting to a point of anarchy. It is the constitutional responsibility of government to protect the lives and property of  its citizens. But, where this looks to have been ignored. We have every reason to be suspicious and to speak passionately to government again that Christians in this nation are Nigerians and must not be killed.

“We want the world to know the evil that is happening in the country under the watch of this government. More blood is been shed.   The killing is religious. Boko Haram sect wants to establish an Islamic state. We must stop this killings.”.

Pastor Enenche, who was the convener of the event, expressed displeasure over the way and manner government is handling Boko Haram. He called  on those sponsoring evil to desist or face God’s punishment.

His words: “I think that this day is one of the saddest in the history of our nation. There has been a high level of willful ignorance on the part of the entire nation.  It looks like some people are telling some fake stories.

“What kind of situation have we found  ourselves? And who in this nation   will be sincere enough to say that everything is right? If this is not a state of emergency of a very calamitous dimension, what are we experiencing? To what extent should it go before people are convinced? A nation is literally being wiped out from the North

“Let the awareness be clear that all is not well in the land.   We have a lot of people in the country today, but it  is as if their lips have been sealed.    People are watching evil going on and nobody is  saying anything.

“It is time for everybody   to say no to this evil.  Enough of evil and bloodshed. Enough   of the rule of terror. Everybody, who is sponsoring, collaborating or supporting the terrorists and bloodshed, let it be known to you that your days are numbered.”

Some victims of Boko Haram were presented with relief materials.