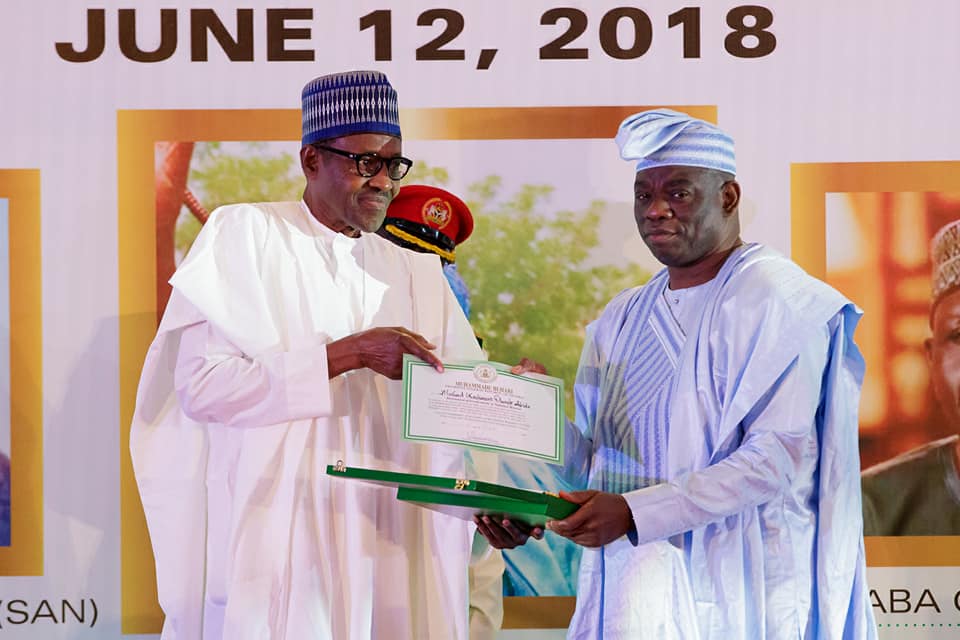 Kola Abiola, the eldest son of the acclaimed winner of the June 12, 1993 Presidential election, Chief MKO Abiola, has disclosed that he made three attempts to make former President Goodluck Jonathan bestow the Grand Commander of the Order of the Federal Republic title on his late father.

Kola, however, said for political reasons, it just could not be done.

He said this during a programme titled, ‘Question Time’,  which aired on Channels Television on Thursday.

According to MKO’s son, he first approached the then Attorney-General of the Federation, Mohammed Adoke (SAN), to honour his father during the Centenary celebration in January 2014 but a gold award was given to the deceased,  which was rejected by the family.

Kola said during his second attempt, he wrote a letter to Jonathan through the Serving Overseer of the Latter Rain Assembly, Pastor Tunde Bakare, during the build-up to the 2015 elections but nothing was done.

He said even after Jonathan had lost and was preparing to leave office, he made another attempt to get him to honour MKO but it failed again.

Kola said, “Towards the election, I approached them again, this time in writing, and solicited the help of Pastor Bakare and told them that even if it was for selfish political reasons, this was something you could do to help your chances of winning elections.

“I really didn’t mind how he got it done. But we couldn’t get President Jonathan to get it done so we left that.

“After he lost the election, I approached him a second time also through the same Pastor Bakare to try to get him to do this as a legacy of his Presidency, something that Nigerians would never forget about him. Last minute, we couldn’t get it to happen.”

Abiola’s son said after President Muhammadu Buhari took office, he sent a letter through Pastor Bakare again to take to the President who was in Kaduna at the time.

He said Buhari bought into the idea and exceeded the expectations of the Abiola family as he did not only honour the deceased with the highest title in the land but also issued an apology to his family on behalf of the Federal Government.

Kola noted that he did not approach former President Olusegun Obasanjo to honour his father because he felt there was no point doing so as the answer would have been obvious.

He, however, said he approached the late President Umaru Yar’Adua, who promised to address the issue but died in office.

When asked his view on Jonathan’s naming of the University of Lagos as Moshood Abiola University, Lagos, Kola said, “That was a mistake. They were trying to regionalise MKO. He was beyond that. This man was voted across Nigeria irrespective of religion.

“I went back to them and told them if they had consulted me, I would have told them what to do.”

Kola said there was no need demanding the release of the result of the June 12, 1993 presidential elections since it was obvious to all Nigerians.

He, therefore, faulted the National Assembly for asking the Independent National Electoral Commission to release the result.

Kola added, “Like Rochas Okorocha would say, ‘It is Ibeberism’ as far as I am concerned. How many times have I been to the National Assembly? All they do is just talk and it gets to the committee and it dies there. That is what they call filibuster in politics. How many times have they not done what is right?

“For me, Mr. President has done undoubtedly what no one was capable of doing and that apology given not just to my father but to Gani Fawehinmi’s family was more than what I bargained for when I was pushing for this.”