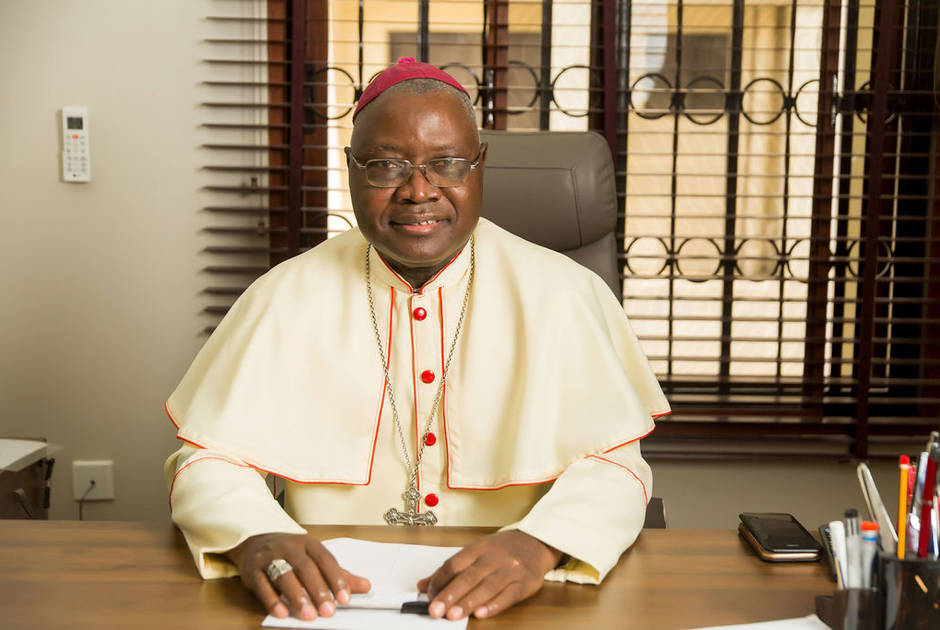 The Catholic Archbishop of Abuja, His Grace Most Rev. Ignatius Kaigama, has urged the Federal Government to liberate Nigerians, especially the youth, from the nation’s current harsh economic realities, Punch reports.

According to him, many young people were desperately seeking greener pastures in other countries.

Kaigama who spoke on Saturday at the priestly ordination of 12 Catholic Deacons in Abuja, said millions of youths were idle on the streets because of the government’s failure to respond to the demands of striking University lecturers positively.

He said, “It should worry us terribly that because of bad politics and bad governance, our young ones, discouraged and crippled by socioeconomic conditions at home, are desperately seeking greener pastures in countries that our resources as the so-called “giant of Africa” could be ten times more than theirs.

“We have millions of idle youths, some of them on the streets and some at home due to government failure to let them back to school by positively responding to ASUU demands, and some, because their schools have become unsafe.

“More than sixty years after independence and blessed with so much oil wealth, many rural and even urban dwellers are still experiencing the lack of potable water, good and safe roads, modern agricultural tools and today, everyone is feeling the harsh impact of the high cost of fuel, etc.

“Electricity supply is epileptic even as smaller countries around us enjoy it better. Instead of seeing politics as a means to good governance and better socio-economic conditions, leaders are employing politics for self-preservation. When it suits them they resort to religious politics.

“We get it wrong when some of us lift private religious practices above national interests or the common good, letting religious distrust, suspicion and stereotypes dominate, and refusing to simply see fellow Nigerians as neighbours to be loved and cherished.”

Lagos promises to reduce unemployment
Kaigama said that the life of a priest is a life of giving more than receiving, and urged the newly ordained Catholic clerics to support in the fight against spiritual, moral and social vices in the nation.

While alluding to the call of Prophet Jeremiah, at a time of worsening social and political situation of Judah, the Catholic Archbishop tasked religious leaders to speak out hard truths that others would rather ignore to those in power.

“For the priest today in Nigeria, his task like that of Prophet Jeremiah is to urgently pull down and destroy not the well-built physical structures, but the unhealthy habits rooted in our tribal, political and religious subconscious, which manifest as poisonous prejudices or violent actions.

“By the grace of God, this priestly action together with the sincere political will of our leaders will lead us to the national consciousness of being one people and one nation.

“If only we use religion to build solid relationships with one another and with God, we will conduct politics without bitterness, malice or violence; we will have an equitable distribution of resources and appointments made into influential positions with greater sensitivity and balance.

“This is how we can achieve the much-needed national consciousness and cohesion, when merit dictates national policies or choices and not who you know or what tribe you come from or the religion you practice,” he said.

The cleric, however, decried the temptation to blame religion as the cause of Nigeria’s problems; stressing that from empirical evidence, religious institutions have assisted the nation so much through educational, medical and social projects.

“We, religious leaders in Nigeria, must be united in inspiring our people in whatever is true, honourable, just, pure, lovely and commendable”, he said.

In this article:Catholic Archbishop of Abuja, News, Rev. Ignatius Kaigama