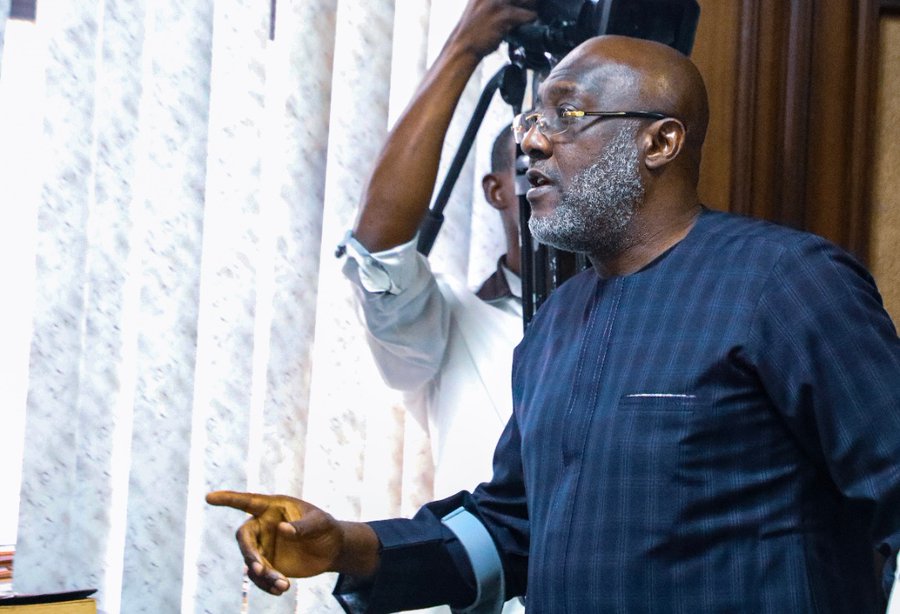 The Federal High Court in Abuja has found Mr Olisa Metuh guilty of money laundering in the sum of N400 million.

The trial judge, Justice Okon Abang, found the former National Publicity Secretary of the Peoples Democratic Party (PDP) guilty on Tuesday while delivering judgement in the suit instituted against him by the Economic and Financial Crimes Commission (EFCC).

The anti-graft agency charged Metuh, who is standing trial alongside his company, Destra investment, with seven counts bordering on criminal diversion of the money received from the office of the former National Security Adviser (NSA), Colonel Sambo Dasuki (rtd).

Delivering judgement in the case, Justice Abang convicted the former PDP spokesman of count one of the charges.

“It is my view that Metuh took possession of the N400 million from the office of the NSA without contractual agreement; he is guilty of money laundering and is hereby convicted on count one.”

Shortly after he was convicted, the trial judged suspended reading the judgment to allow the former PDP spokesman use the gents.

Upon his return to the courtroom, Justice Abang proceeded with his judgement on the second count of the charges which bordered on the criminal conversion of N400 million.

According to him, the evidence before him shows that the money was used to fund activities of the PDP.

The judge added that Metuh also used the money to acquire a property at Banana Island in Lagos.

He explained that this was contrary to the e-payment mandate which stated that the money was meant for security services, whereas Dextra Investment was not a registered security outfit.

Justice Abang insisted that the evidence pointed to the fact that the money was deliberately laundered to brighten the chances of the PDP during the general elections in 2015.

“It is, therefore, manifestly clear that the defendant converted the money for PDP campaign activities and I find him guilty and is hereby convicted accordingly,” the judge declared.

On count three which bordered on concealment of funds, Justice Abang says the e-payment mandate showed that the money was released for security services but was concealed and used for PDP campaign activities and personal use.

“I hereby find him guilty and convicted on count 3,” he ruled.

The trial judge also delivered judgment on count 4 which was the allegation of illegal disbursement of funds.

He said the Prosecution placed credible evidence before the court which showed some of the unlawful acts of Colonel Sambo Dasuki as the NSA while in office.

Justice Abang held, “The first defendant was desirous of repositioning the PDP and he deployed the funds for that purpose and personal use.”

He noted that the meeting wherein former President Jonathan allegedly authorised the payment was tagged a ‘security meeting’.

But the judge wondered why only the former NSA and top officials of the PDP attended the meeting, yet Metuh claimed the money was disbursed for special national assignment.

But the judge wondered why only the former NSA and top officials of the PDP attended the meeting, yet Metuh claimed the money was disbursed for special national assignment, stressing that the first defendant was not a witness of truth.

He said, “I agree with the prosecution that Metuh’s claims are tissues of lies hurriedly put in place to divert the attention of the court from prying into the disbursement of the N400 million received from the office of the NSA through an under the table agreement.

“It is a case of public funds filtering into private hands for selfish reasons.”

Justice Abang, therefore, held that the N400 million was never released for a special national assignment based on the evidence before him.

“Therefore, I find the first and second defendants guilty on count 4,” he ruled.

Justice Abang, therefore, held that the N400 million was never released for a special national assignment based on the evidence before him.

He then proceeded to give judgement on count 7 – transfer of funds to a PDP chieftain, saying he would come back to counts 5 and 6.

On the seventh count of the charges, the trial judge held that the transfer of N27.7 million to Mr Anthony Anenih for a special national assignment directly represented the illicit nature of the fund.

“I have again considered the position of the prosecution and found that the prosecution proved the transfer of N27.7 million to Chief Anthony Anenih, and I hereby find the first and second defendants guilty on count 7 and are hereby convicted,” he ruled.