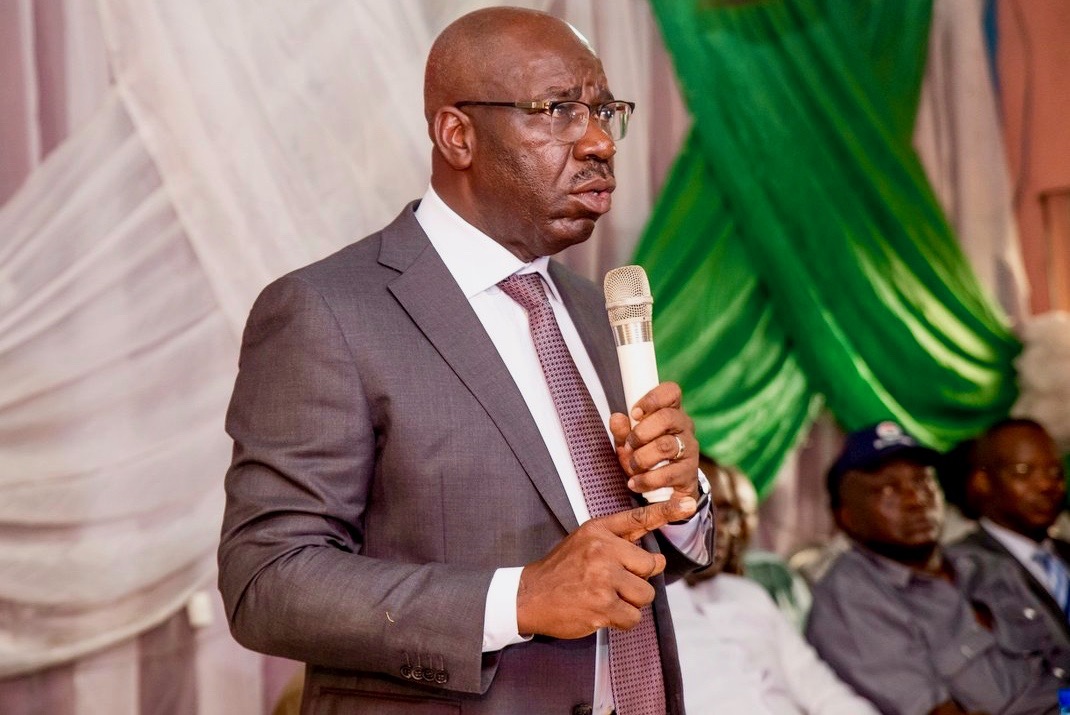 Edo State Governor, Mr. Godwin Obaseki, has vowed to deal with his predecessor and National Chairman of the All Progressives Congress, Comrade Adams Oshiomhole if he (Oshiomhole) continues to disrupt activities in the state and in the Edo APC.

Governor Obaseki said Oshiomhole as a Governor would not tolerate a fraction of the misdemeanour and misbehaviour he (Oshiomhole) is undertaking today.

Obaseki who spoke when he attended a meeting of the 18 APC local government Chairmen in the state said he would show Oshiomhole that he (Obaseki) is the governor of the state.

The Edo Governor said the regret of the Edo APC was the elevation of Oshiomhole without knowing the kind of a person he is.

He directed the party chairmen to seriously deal with any persons or group carrying out activities outside what the party hierarchy has agreed to do.

Governor Obaseki stated that Oshiomhole did not build the APC as there was no party structure in place when he became Governor.

According to him, “This is not a party man. Look at the dump he kept the party as a Secretariat. With all the resources we had he could not support the party until the landlord evicted us. You are Governor or chairman based on the platform that elevated you. That is why I looked for one of the most beautiful building along Airport Road and said this is the secretariat of the party.

“All these non-sense they are doing. If anybody in the name of our party tries to do anything contrary to what we have agreed as a party we will deal with that person ruthlessly no matter who he is.

“I am the Governor of Edo State and I so authorise it. If anyone comes to your ward or local government to do things outside what the party has agreed I hereby authorise you to deal with that person seriously.

“We are warning the suspended National Chairman. If he continues his activities in Edo State, I will show him that I am the Governor of Edo State. Why he was Governor, he will not tolerate a fraction of the misdemeanour and misbehaviour he is undertaking today. I have declared that if Oshiomhole comes here to Edo to say he wants to disrupt the activities of the state and the party we will deal with him the way we know how best to do it.

“Comrade Oshiomhole stands suspended from the party. In due course, we will expel him if he does not behave. The party does not belong to him, it belongs to all of us. We are following the wish of our people. Our next step is to make sure we convince more people to join our party so that all of us can move this state to the next level. I will give you all the support to strengthen the party at the local government. Monthly meetings must hold. Monthly wards meetings must hold. Attendance must be taken. Wherever there are issues, you sit down and discuss it.”

A former member of the House of Representatives, Hon Pally Iriase, described Obaseki’s comments as unfortunate and a hard one at that.

Iriase said the APC ought to be built and run on democratic principles adding that there was no room in the APC constitution for garrison tactics.

The former lawmaker stated that receiving defectors does not amount to anti-party activities.

Iriase said Obaseki should be accused of anti-party activities and they would not allow Obaseki stopped the party from growing.

His words, “Ever since we left the military, we have not seen this kind of repressive administration that gag political opinion. By now, Obaseki should be pointing out projects in my local government and several others and not this jackboot tactics.

“Obaseki has not performed. That is what he should know. In the first nine months, Obaseki earned N57bn, what he would have achieved with that amount will be obvious to the eyes and loud to the ears.

“How does growing the party and swelling its ranks become anti-party activities? We should be getting kudos. Obaseki is trying to scare people away. This jackboot democracy in Edo will not work.”