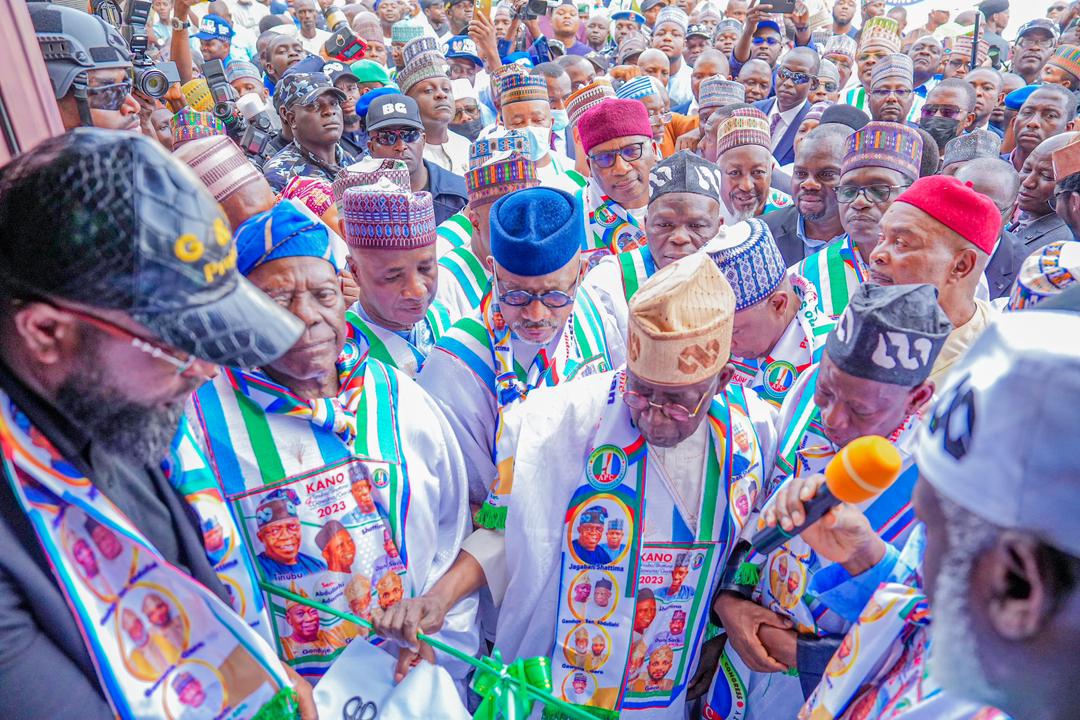 A huge crowd of party faithful and supporters converged yesterday on the Sani Abacha Stadium in Kano for the presidential campaign of the All Progressives Congress (APC) standard bearer Asiwaju Bola Tinubu.
The rally was organised by the Northwest zone of the ruling party, The Nation reports.

The stadium was filled to the brim. Many party members and supporters who stayed outside and struggled to force themselves inside were intermittently advised to return home.

Tinubu was accompanied in a caravan from the Kano State Government House to the stadium by officials and players of 5,000 registered and unregistered football clubs from the region.

The procession, which lasted over two hours, resulted in gridlock and shutdown of business activities along the routes leading to the stadium located at Kofar Mata in the ancient city.

When the APC presidential candidate mounted the podium and sighted the sea of heads, he retorted: “I am your own. I am overwhelmed.”

Also, when a song composed in his name was played, an excited Tinubu danced briefly and thanked the people for the rousing welcome accorded to him.

He promised to serve and protect Nigerians at home and abroad if elected as President.

Tinubu said: “I will serve you; I will serve Nigerians and protect all. I will keep my promise. I am overwhelmed; I am here just to dance. Nothing to add. Nagode (thank you), nagode, nagode. So sai.”

The former Lagos State governor said Nigerians should not be cajoled into allowing the opposition Peoples Democratic Party (PDP) to return to power during the February 25 election.

Tinubu, who also said the PDP presidential candidate, Atiku Abubakar, has nothing to offer, warned that a PDP government at the centre would be a return to maladministration.

Aligning with Rivers State Governor Nyesom Wike’s claim that Atiku had no integrity, he accused Atiku of establishing a university that is too expensive for Nigerians to attend.

According to statement by his media office, Tinubu said: “We can make Nigeria better, safer, and more prosperous. We can educate our youth, feed our people and put an end to fear. We can do these things. We can move you forward.

“But the others cannot. They want to hold you back so that they are the only people that can move forward. They offer nothing but fake promises and easy answers that hold no water. All they can show you is how to hate your fellow Nigerian and reject your neighbour.

“But they cannot show you how to protect our society, feed our people, provide jobs and care for those in true need of help.

“Let me say this clearly and plainly. This campaign is about our collective march to a better Nigeria. Do we march forward? Or do we lose sight of the road?

“We must march forward. But we cannot forget how they frittered away our Commonwealth. For 16 years they toyed with our lives and the future of this country. They spent $16 billion on electricity, but they procured darkness instead. They didn’t remember the pipelines and processing facilities to give us electricity. They shared the electricity generation money among themselves and their cronies.

“Neither he nor his party can keep their promise. Tell me how will they keep their promise to the nation. No wonder, their party is in tatters! Governor Wike was right when he talked about a lack of integrity, saying “look at the man and his history.”

“Their contribution to institutional-building is to create an electoral commission to rig elections, not to conduct transparent polls, and to establish EFCC to witch-hunt political opponents, not to fight corruption.

Tinubu listed some of President Muhammadu Buhari’s achievements and promised to build on them.

He cited the Anchor Borrowers’ Programme, particularly in rice production, the Lagos-Ibadan highway, which he said, the PDP failed to fix, and the Second Niger Bridge, among other infrastructure projects.

Tinubu said he would rework the public finance system to unlock the avenues for more revenues for the country as he did in Lagos as governor.

On his plan for the people of Kano State, he promised to consolidate the gains recorded in the agriculture sector and revive the state’s industrial estates.

His words: “For this important Kano city, we shall work with the state government to make it a first-class economic mega city. Also, famous dams such as Tiga, Chalawa Gorge, Thomas, and Kusalla, will get special attention.

“We shall increase irrigated land, create water catchments and implement other measures that will allow you to cultivate these lands all year round – improving productivity, creating jobs, and increasing food supply while ending hunger.

“Through Commodity Exchange boards and better credit access, we will guarantee incomes for farmers while also allowing them to get affordable loans to improve their output and incomes.

”My industrial policy shall revive the respected but now idle industrial estates in Sharada, Bompai, Panshekara, Jogana, etc. We have the policies and tools to make them competitive and to create thousands and thousands of new jobs for you.”

Tinubu also promised to speedily complete the Kano – Lagos rail project for easy movement of goods and services, while the Kano-Maiduguri and Kano-Kaduna-Abuja roads will be improved.

He said: “Kano and Lagos are the twin cities of North and South. Let us further cement that relationship, not only to improve the two cities, but to move the entire nation forward. Let us join together for a better tomorrow. Let us renew hope.”

Tinubu’s running mate, Senator Kashim Shettima, said the Tinubu administration would complete projects started by Buhari that may not be ready before May 29.

National Chairman of the APC, Abdullahi Adamu, urged the people of the zone to vote for Tinubu and other candidates of the party for peace, unity, progress, and development of the country.

He commended the people for the warm reception and hospitality accorded to the APC candidate and his team.

He added that the crowd that gathered at the launch had signaled victory for the party.

Host Governor Abdullahi Ganduje, who on Tuesday declared that the rally yesterday would be “historic”, said Tinubu met all the variables required for the nation’s number one job.

He said: “We have put into consideration the credentials of our presidential candidate and his running mate. Tinubu is a tested and trusted person.”

The governor, who thanked the people for their support, reassured Tinubu of Kano votes.

He said: “The success of the rally is a clear statement and demonstration of the preference of Kano people as regards the choices before them.”

Ganduje said Tinubu had the character, capacity, and competence to provide a leadership worthy of pride.

At the rally, Kebbi State Governor Abubakar Bagudu boasted that members of the Progressives Governors’ Forum would ensure Tinubu’s victory at the poll.

Bagudu, who chairs the forum, urged Nigerians to vote for Tinubu and Shettima for massive development.

He said: “All the APC governors are united and have promised to deliver Asiwaju Bola Ahmad Tinubu at the election.

“We know that Tinubu will replicate what he did in Lagos nationwide when he is elected president of this country.”

Director of the Northwest Tinubu/Shettima Campaign Council Support Group, Baffa Dan-Agundi, in a statement, said youths jubilated and chanted “Jagaban for Nigeria, during a football match between Kano Pillars FC and Super Eagles legends ahead of the rally.

Dan-Agundi added that “after the match, the Super Eagles legends urged their fans to vote for Tinubu.

He said: “The result can be vividly seen by the massive turnout of over 5,000 registered and unregistered football clubs who came out to receive Tinubu.”