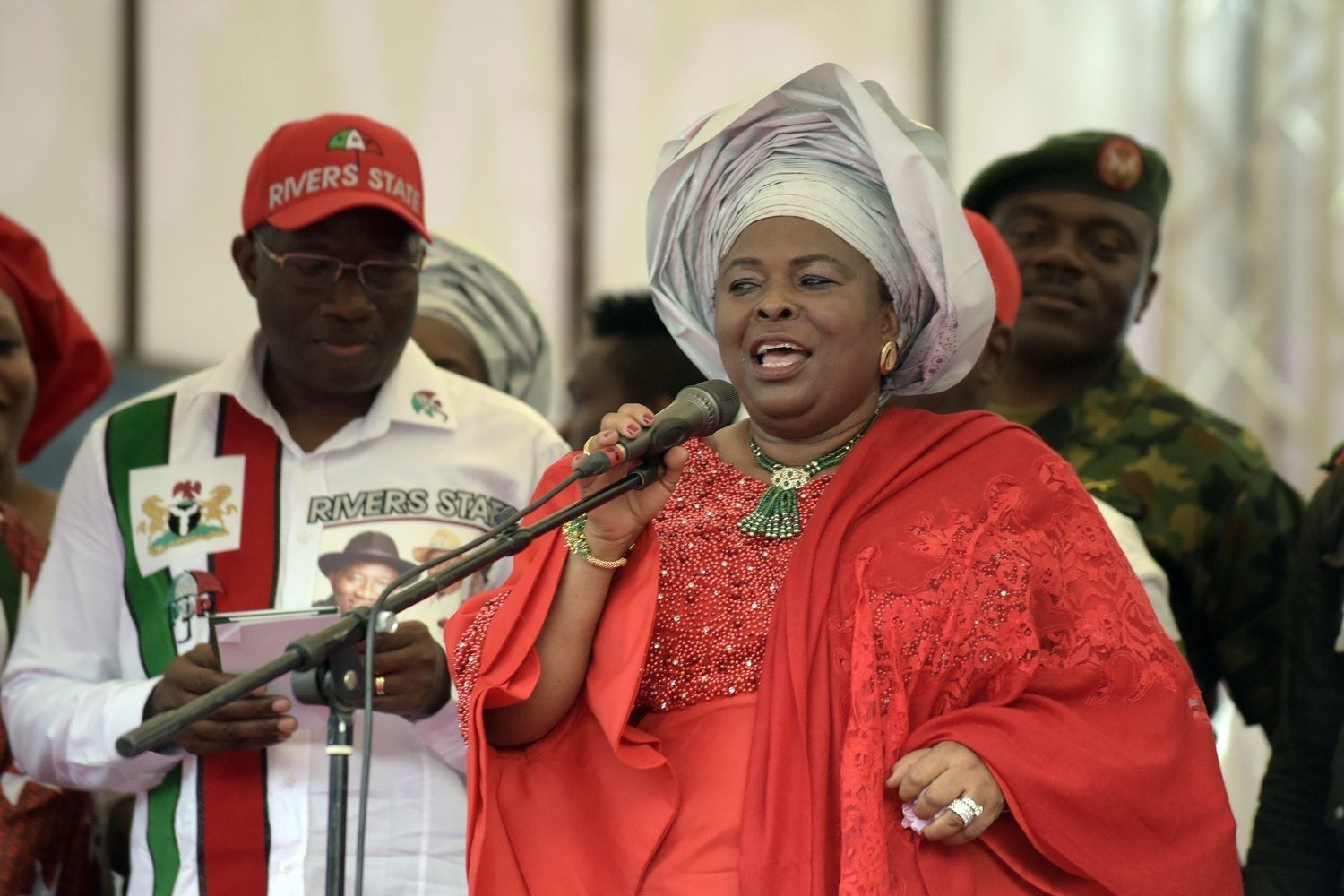 Nigerian President and presidential candidate of the ruling People's Democratic Party (PDP) Goodluck Jonathan (L) looks at notes as his wife Patience addresses an election rally in Port Harcourt, in the Niger Delta region, on January 28, 2015. Nigeria's President Goodluck Jonathan on January 28 took his re-election campaign to the Niger Delta, knowing that victory in the key oil region will help determine the winner of next month's vote. The head of state, who is looking for a second four-year term, was in Port Harcourt, the capital of Rivers State, which is controlled by the opposition and seen as a pivotal election battleground. AFP PHOTO / PIUS UTOMI EKPEI (Photo credit should read PIUS UTOMI EKPEI/AFP/Getty Images)

25th October is here again and it is another opportunity to celebrate an icon of selfless service, a voice for the voiceless and a humanitarian with a passion for women and the young.

At 52 the former first lady, Dame Patience Jonathan, stands tall as a colossus. Her achievements are monumental, one of such achievement was the 35% affirmative action for women which was adopted by the government of the day and the party in power. The former first lady made history and for the first time in Nigeria we had more women in elective and appointive positions.

A brief history of this colossus, will suffice. She was born in the Southern part of Nigeria, Rivers State to be precise on the 25th of October 1965, where she had her primary and secondary school education.

Mrs Jonathan proceeded to Rivers State College of arts and science to obtain an NCE certificate in mathematics and biology in 1989. Her desire for further education took her to University of Port Harcourt (UNIPORT) where she obtained a degree in Biology & Psychology. She currently has 4 Honorary Doctorate degrees, one of which is a Honorary Doctorate degree from a South Korean University. The awarding institution, Hansei University, said they honoured Mrs. Jonathan because she had worked “hard for many good causes.”

“She is a humanitarian whose life is dedicated to working for the less privileged in Nigeria and Africa particularly for women and children,” President and Chancellor of Hansei University, Sung-Hae Kim said.

”Her vision as the defender of the poor in Nigeria fits into Hansei University’s motto of a practising Christian. Now she’s part of our community,” Prof. Kim added.

Dame Patience Jonathan started her career as a teacher at the Stella Maris College, Port Harcourt and Sports Institute Isaka. She then moved to the banking sector in 1997. She served as Marketing Manager of Imiete Community Bank. After which she became a pioneer staff of the first community bank in Port Harcourt called the Akpo Community Bank. She returned to the classroom briefly again as a teacher. Eventually she was transferred to the Bayelsa State Ministry of Education, where she served until 29 May 1999 when her husband became the Deputy Governor of the state. On 12 July 2012, she was appointed as permanent secretary in Bayelsa state by Governor, Henry Seriake Dickson. Dame Patience Jonathan was honoured with the Knighthood of the Anglican Church thus the title Dame before her name.

While serving as the first lady of Bayelsa State In 2006, A. Aruera Reachout Foundation was founded with the aim of empowering women and young people to be self-sufficient. Her NGO A. Aruera Reachout Foundation has a medical unit which sponsors the treatment and surgery of children and some adults with heart conditions. The Foundation conducts Children’s Clinics periodically to diagnose the condition of each child that needs assistance. During these clinics, Consultant Paediatric Cardiologists from the National Hospital Abuja, the University of Abuja Teaching Hospital and the Apollo Hospital Chinnai, India evaluate the health condition of the children.

Those diagnosed with heart problems that can be successfully treated in Nigeria are referred to the National Hospital Abuja, while those with heart conditions that cannot be treated within the country are sponsored to the Apollo Hospital in India. The Foundation has technical partners in India, South Korea and America. Some very serious cases can undergo treatment in any of these countries.  Her NGO has also successfully trained over 4000 women and youths on different vocational skills.

The wife of the former British Prime Minister Mrs Cherie Blair and the First Lady of China, Peng Liyuan commended the former First Lady, Mrs. Patience Jonathan’s commitment to improving the lot of women, through her NGOs.

Dame Patience Faka Jonathan has been recognized locally, nationally and internationally for her philanthropic work and political pragmatism. She received the “Beyond The Tears” International Humanitarian Award New York, USA, in 2008, for her role in the global fight against HIV/AIDS; the African Goodwill Ambassador Award (Los Angeles, USA, 2008) and was the recipient of the “Wind of Change” Award from the South/South Women’s Organization.

Dame Patience Jonathan’s selfless service to humanity and her passion for the downtrodden which resulted in the setting up of her NGO’s has without a doubt engraved her name positively in the sands of time. According to Aristotle “Of all varieties of virtue, liberality is the most beloved” no wonder Mama Peace as she is fondly called is loved by all.

On behalf of A. Aruera Reachout Foundation we wish you a happy birthday and many more fruitful years ahead. Congratulations!!! 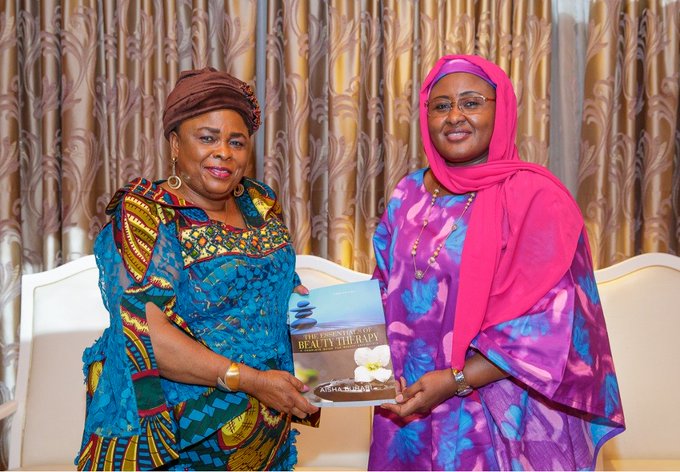 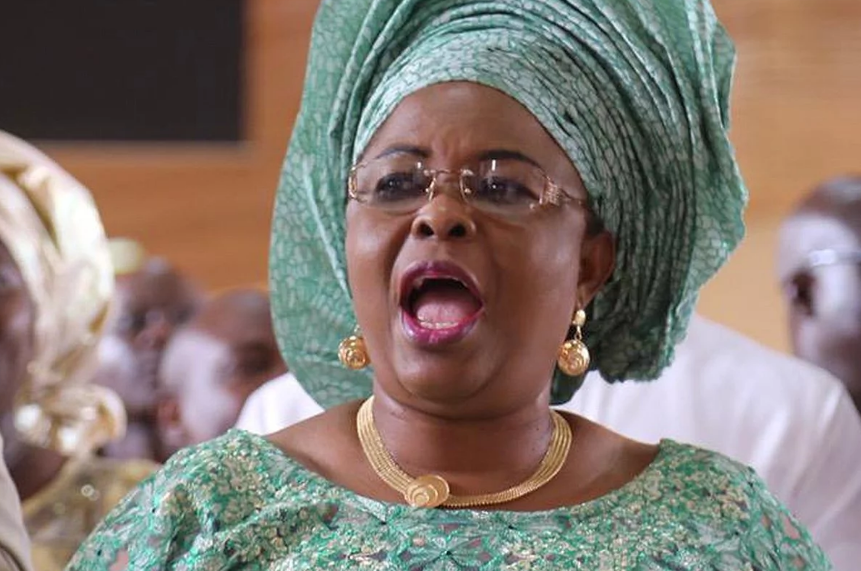 The Federal High Court in Lagos on Monday ordered the forfeiture of ex-First Lady Dame Patience Jonathan’s $8.4 million and N9.2 billion to the...

Exactly eight days after the Supreme Court upheld Federal Government’s interim seizure of the $8.4 million believed to be owned by ex-First Lady, Mrs....