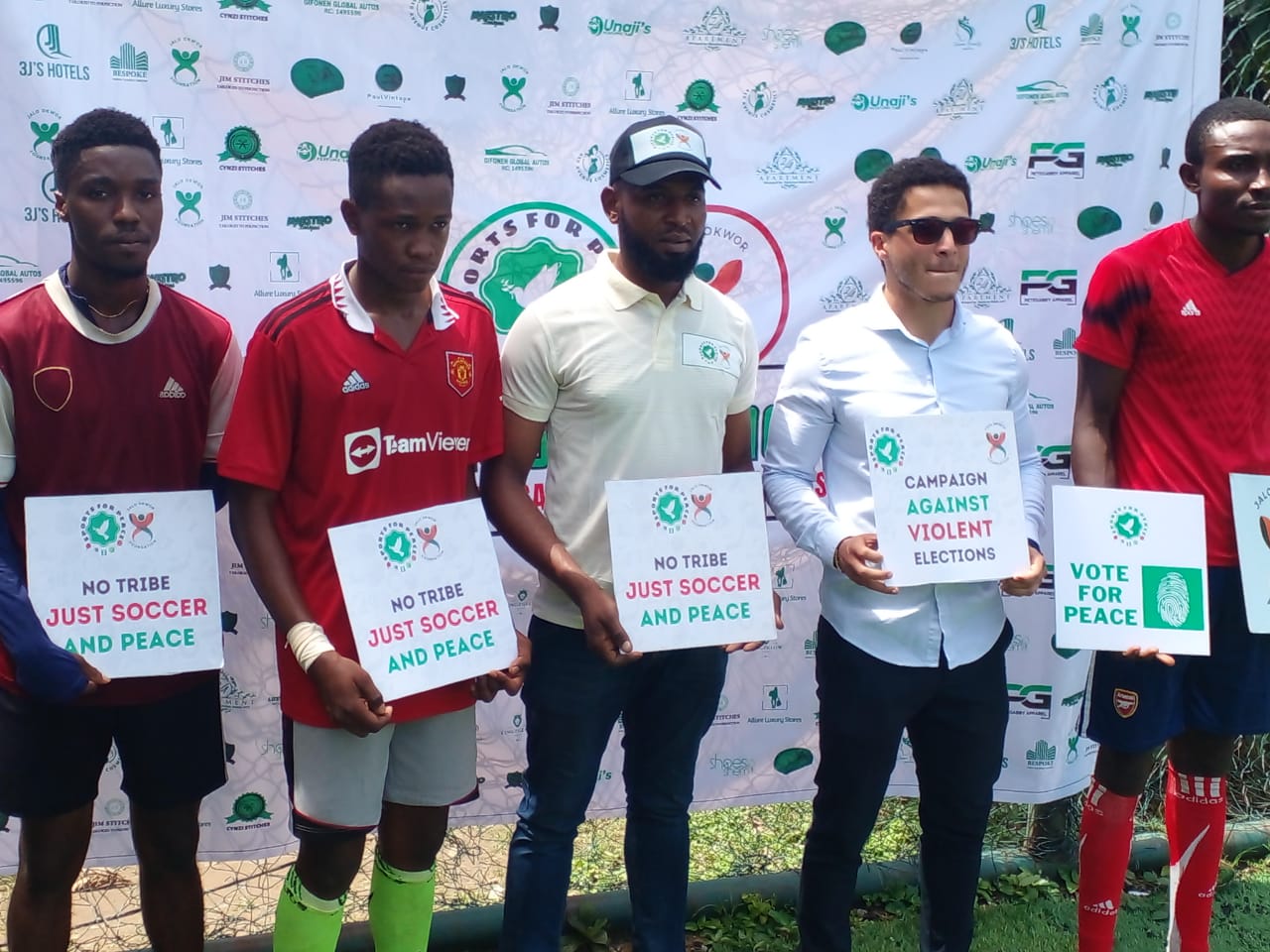 The Twenty Bucks Creative, in collaboration with Jalo Okwor Foundation, has flag-off campaign against violence election in Nigeria.

Flagging off the campaign tagged ‘Sports for Love’ the Founder and CEO of Twenty Bucks Creative, Charbel Jarrouge, described sports ad the only unifying factor which Nigerians can draw tremendious inspiration from, especially on peace building during the electioneering campaign.

Jarrouge cautioned the youths to always follow the path of peace and not present themselves to be used as a tool to perpetuate violence before, during and after the elections.

He said that youths who are eligible to participate in the electoral process in 2023 should not be myopic as to going as far as selling their votes, rather they should think of the future implications of engaging in such acts.

“I use this opportunity to come out, speak more, build awareness, talk about what exactly is going in our society as well as educate the youth to scale the balance of the pros and cons of what they should do.

The National Coordinator, Jalo Okwor Foundation], Stephen Okwor, corroborated Olusanya, by saying its high time elections in Nigeria become like sports where once the game begins nobody cares about social, economic or primodial interests like religion or ethnic lineage.

Some of the participants at the launch held placards with inscriptions such as, “say no to violence before, during and after elections”, “play for peace”,”say no to violence”,” I support peaceful elections in Nigeria” among others.

“Youths are usually the tools for electoral violence, even though the ideas originate from our political office holders or seekers, we realise that the tools to carry out these violence are the youths.

“So that is why we centred on the youths, although because of our activities we try to inculcate the leaders, because its part of the wholesome process, so we try to sensitize, reorientate, educate and encourage youths so that they refuse to be part of electoral violence in Nigeria.

“Sports is a unifier, as we are playing sports now, nobody is asking the other person are you Hausa, Igbo or Yoruba, none is asking are you christian or muslim, we don’t care about the racial demand, economic demand or how much is in your bank account at this moment, nobody cares, that is why it is a perfect vehicle because it is neutral of religion, neutral of social or ethnic status”.

Also speaking, the Political Analyst, Twenty Bucks Creative, Wilson Uche, also advised the federal government to do everything possible to address the grievances of the Academic Staff Union of Universities (ASUU) so as to enable students return to the classroom before the 2023 general elections.

He said that if nothing is done to end the strike, students who are mostly idle could be ready tools for the political class to use in perpetrating violence.

“If we must have peace in our elecroral process, youths must be taken into consideration at all times, you dont expect a man of 60 years going out there to fight, but we are afraid that the current strike by ASUU may encourage students who are currently idle to be ready tools for politicians.

“That is why we are out to call on youths to embrace peace before and after the elections, relying on figures from the National Bureau of Statistics, over 55 percent of youths are out of school and because they are jobless, this is a huge number of people that politicians can coopt easily but when you disengage them, it will go a long way to prevent violence and unnecessary loss of lives,”Uche stated.