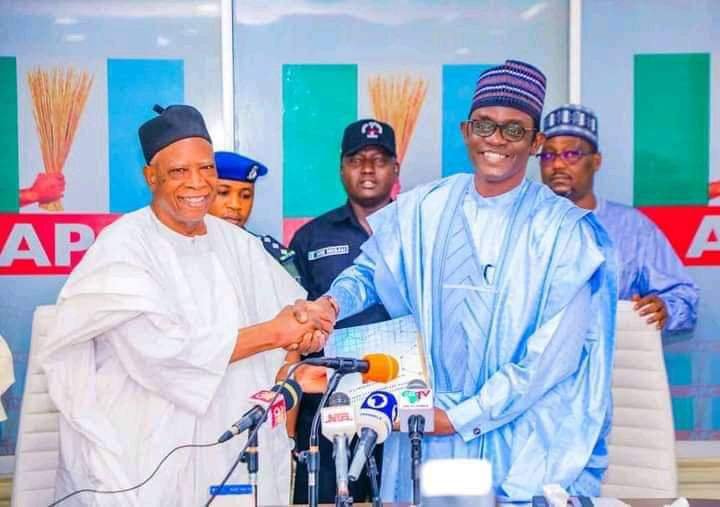 The National Chairman of the All Progressives Congress (APC), Senator Abdullahi Adamu, yesterday opened a can of worms, saying the level of corruption in the system under Governor Mai Mala Buni-led Caretaker/Extraordinary Convention Planning Committee was too high, Daily Trust reports.

Adamu, who stated this during an interactive session with newsmen at the APC National Secretariat in Abuja, said they inherited N7.5bn debt from the Buni-led caretaker committee.

On why directors of various departments at the APC headquarters were sacked, Adamu said the level of corruption in the system they worked was too high.

Adamu had, on April 22, ordered all departmental directors at the party’s national secretariat in Abuja to proceed on indefinite suspension over allegations of corruption.

On assumption of office on April 1, Adamu set up a transition committee headed by a former governor of Jigawa State, Ali Saad Birnin Kudu, to study the handing over notes of the then Caretaker/Extraordinary Convention Planning Committee led by Yobe State governor, Mai Mala Buni and other issues affecting the party.

‘Why we sacked them’

Adamu, a former governor of Nasarawa State said; “We came in here to reorganise and reposition the party. We came and met the party in a state of mess and just because you want to be decent; because you don’t want to offend anybody you will continue with the mess you met?

“We came and met a party where people were fixing all manner of things. We had a bill of about N7.5bn to settle. We came to find that here everybody was like on his own; everybody was doing what they wanted to do. No control, no system, no due process and just because you don’t want to be accused of anything, you will just allow that to go? No, I am not in that brand; my DNA has a terrible allergy to that.

“And I am sure all of my members in the NWC share in this. So we found the necessity to reorganise the entire place and we didn’t do anything with any bias or prejudices on our part. We will be abused, we will be accused but we are humans. I am not saying we don’t make mistakes.

“Recently, we tried to introduce table payment and you know we don’t have 200 people working for us here, but go to the payroll, you will see over 200 people. Where are they? What are they doing for us? Where are their letters of appointment?” he queried.

He said that the NWC is still finding its altitude seven months after the assumption of office.

“This is our seven month in office, we are still finding our altitude,” he said.

The Director General, Press and Media Affairs to Governor Buni, Mamman Mohammed, neither answered his calls nor responded to an SMS and WhatsApp messages sent to his phone for comment as of the time of filing this report.

But speaking in one of the events while in the saddle, Buni said, “The CECPC inherited liability of unpaid legal fees to the tune of N340 million, but successfully negotiated and brought down the fees to N179 million which is now fully paid.”

Buni also said in one of the events that the Caretaker Committee had completed payment for the APC national secretariat building, which became the party’s property and was named after President Buhari (Buhari House).

Buni-Committee was inaugurated on June 25, 2020, with the specific mandate to among other things reconcile aggrieved party members and organise a national convention for the emergence of a new National Working Committee (NWC) within six months.

This followed the dissolution of the Adams Oshiomhole-led NWC by the National Executive Committee (NEC) over alleged abuse of office.

The committee’s timeline was later extended by the NEC on December 8, 2020, for another six months to enable it accomplish its mandate.

At the expiration of the 12 months, there was no convention as President Muhammadu Buhari had single-handedly extended the committee’s timeline indefinitely.

In total, the interim committee spent 21 months in office before finally handing over to the Adamu-led NWC in March 2022.

Sequel to this, the caretaker committee, during a meeting with President Buhari in Aso Villa got his nod to embark on nationwide membership registration and revalidation exercise which ended on March 31, 2021.

The party had registered over 40 million members nationwide to retain power in 2023. The Buni-led committee had also led the party to victory in the Ondo State governorship election.

The caretaker committee had pushed for the establishment of a tripartite committee to be saddled with the responsibility of enhancing communication and relationship between the executive, legislature and the ruling APC, to ensure smooth and effective service delivery to Nigerians.

This was done and President Buhari appointed Vice President Yemi Osinbajo as the chairman of the tripartite committee.

Under the Buni-led committee, the APC had amended its constitution, ratified and adopted it at the March 26 national convention of the party held at Eagle Square in Abuja.

Osinbajo, Amaechi, others have keyed into APC’s 2023 project

Top presidential contenders such as Vice President Yemi Osinbajo, a former Minister of Transportation, Rotimi Amaechi and Senate President Ahmad Lawan had shunned a meeting aimed at brokering peace after the primaries.

But Adamu said they have been reconciled and had agreed to work for the party in the 2023 poll, adding that reconciliation is a work in progress.

“To the best of our knowledge, they have keyed into our project. Each of the aspirants for the presidency of this country that presented themselves during the primaries is still alive.

“I have not seen any reason why you have not taken the initiative having observed or having the state of mind that requires to know where they stand today. Do you have any restrictions meeting any of these people?

“It will be very absurd for me to start talking about them if you notice anything that is not normal or you want something from them that you have not seen. Nothing stops you from meeting anyone of them. As for reconciliation, it is a work in progress. We have been doing it; we have been talking to them individually,” he said.