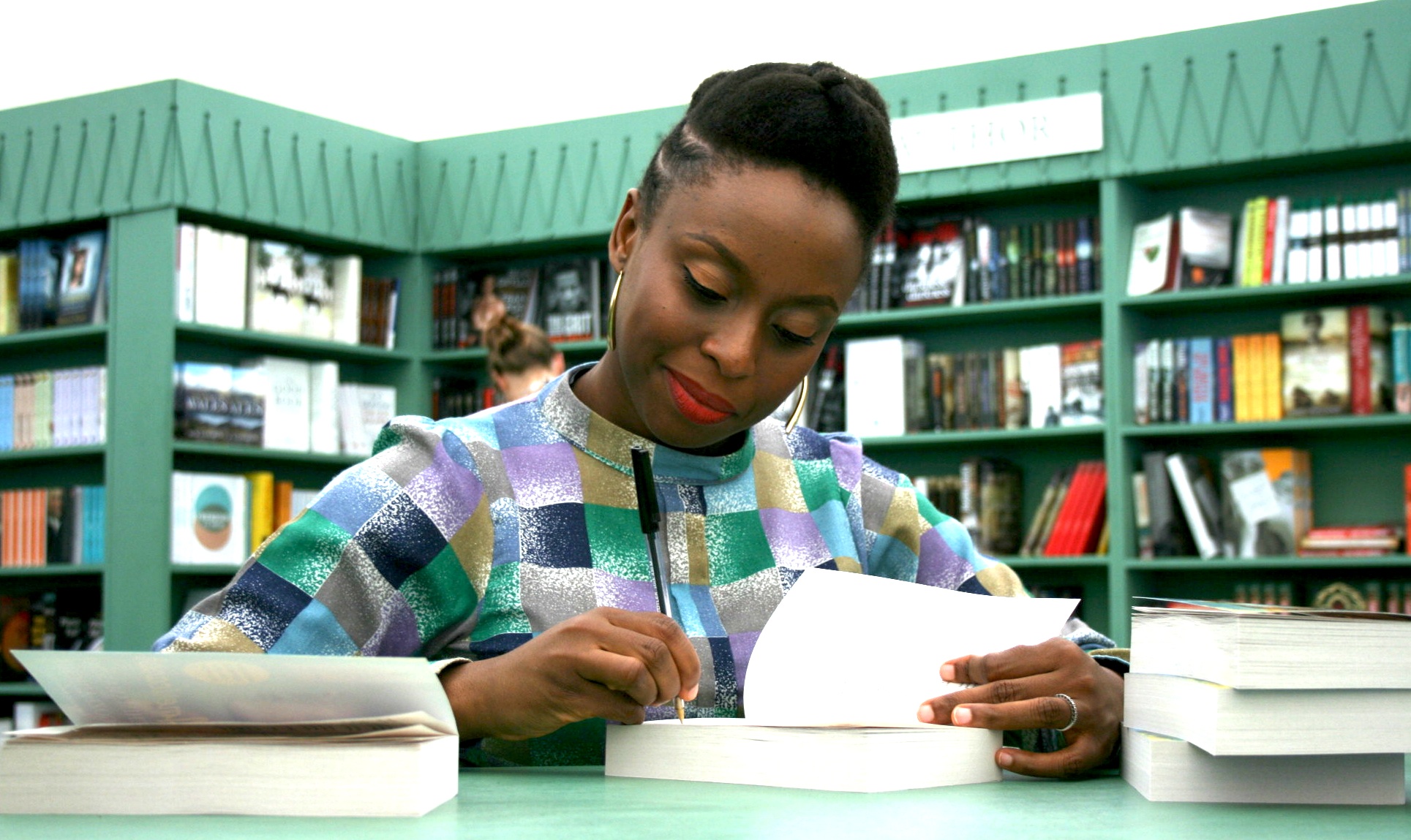 In an article titled, “Nigeria’s failed promises”, she criticised his appointments, his economic policy, his nationalist agenda and his silence in the face of the brutal murder of Nigerian citizens by the Nigerian Army and other security agencies.

She attacked President Buhari for his attitude towards sectarian divides: “His behavior suggests he is tone-deaf to the widely held belief among southern Nigerians that he promotes a northern Sunni Muslim agenda”, she said.

The Nigerian author suggested that Buhari’s war against corruption may not be as clean as he makes out stating that “Arrests have tended to be selective, targeting mostly those opposed to Mr. Buhari’s government.”

Adichie thinks that this all feels like deja-vu. ‘There are eerie signs of the past’s repeating itself — Mr. Buhari’s tone and demeanor are reminiscent of 1984, and his military-era War Against Indiscipline program is being reintroduced”, she wrote.

Read the full article below:

I was 7 years old the first time I recognized political fear. My parents and their friends were talking about the government, in our living room, in our relatively big house, set on relatively wide grounds at a southeastern Nigerian university, with doors shut and no strangers present. Yet they spoke in whispers. So ingrained was their apprehension that they whispered even when they did not need to. It was 1984 and Maj. Gen. Muhammadu Buhari was the military head of state.

Governmental controls had mangled the economy. Many imported goods were banned, scarcity was rife, black markets thrived, businesses were failing and soldiers stalked markets to enforce government-determined prices. My mother came home with precious cartons of subsidized milk and soap, which were sold in rationed quantities. Soldiers flogged people on the streets for “indiscipline” — such as littering or not standing in queues at the bus stop. On television, the head of state, stick-straight and authoritative, seemed remote, impassive on his throne amid the fear and uncertainty.

And yet when, 30 years later, in 2015, Mr. Buhari was elected as a democratic president, I welcomed it. Because for the first time, Nigerians had voted out an incumbent in an election that was largely free and fair. Because Mr. Buhari had sold himself as a near-ascetic reformer, as a man so personally aboveboard that he would wipe out Nigeria’s decades-long corruption. He represented a form of hope.

Nigeria is difficult to govern. It is Africa’s most populous country, with regional complexities, a scarred history and a patronage-based political culture. Still, Mr. Buhari ascended to the presidency with a rare advantage — not only did he have the good will of a majority of Nigerians, he elicited a peculiar mix of fear and respect. For the first weeks of his presidency, it was said that civil servants who were often absent from work suddenly appeared every day, on time, and that police officers and customs officials stopped demanding bribes.

He had an opportunity to make real reforms early on, to boldly reshape Nigeria’s path. He wasted it.

Perhaps the first clue was the unusually long time it took him to appoint his ministers. After an ostensible search for the very best, he presented many recycled figures with whom Nigerians were disenchanted. But the real test of his presidency came with the continued fall in oil prices, which had begun the year before his inauguration.

Nigeria’s economy is unwholesomely dependent on oil, and while the plunge in prices was bound to be catastrophic, Mr. Buhari’s actions made it even more so.

He adopted a policy of “defending” the naira, Nigeria’s currency. The official exchange rate was kept artificially low. On the black market, the exchange rate ballooned. Prices for everything rose: rice, bread, cooking oil. Fruit sellers and car sellers blamed “the price of dollars.” Complaints of hardship cut across class. Some businesses fired employees; others folded.

The government decided who would have access to the central bank’s now-reduced foreign currency reserves, and drew up an arbitrary list of worthy and unworthy goods — importers of toothpicks cannot, for example, but importers of oil can. Predictably, this policy spawned corruption: The exclusive few who were able to buy dollars at official rates could sell them on the black market and earn large, riskless profits — transactions that contribute nothing to the economy.

Mr. Buhari has spoken of his “good reasons” for ignoring the many economists who warned about the danger of his policies. He believes, rightly, that Nigeria needs to produce more of what it consumes, and he wants to spur local production. But local production cannot be willed into existence if the supporting infrastructure is absent, and banning goods has historically led not to local production but to a thriving shadow market. His intentions, good as they well might be, are rooted in an outdated economic model and an infantile view of Nigerians. For him, it seems, patriotism is not a voluntary and flexible thing, with room for dissent, but a martial enterprise: to obey without questioning. Nationalism is not negotiated, but enforced.

The president seems comfortable with conditions that make an economy uncomfortable — uncertainty and disillusion. But the economy is not the only reason for Nigerians’ declining hope.

A few months ago, a young woman, Chidera, came to work as a nanny in my Lagos home. A week into her job, I found her in tears in her room. She needed to go back to her ancestral home in the southeast, she said, because Fulani herdsmen had just murdered her grandfather on his farm. She showed me a gruesome cellphone photo of his corpse, desecrated by bullets, an old man crumpled on the farm he owned.

Chidera’s grandfather is only one of the hundreds of people who have been murdered by Fulani herdsmen — cattle herders from northern Nigeria who, until recently, were benign figures in the southern imagination, walking across the country with their grazing cattle.

Since Mr. Buhari came to power, villages in the middle-belt and southern regions have been raided, the inhabitants killed, their farmlands sacked. Those attacked believe the Fulani herdsmen want to forcibly take over their lands for cattle grazing.

It would be unfair to blame Mr. Buhari for these killings, which are in part a result of complex interactions between climate change and land use. But leadership is as much about perception as it is about action, and Mr. Buhari has appeared disengaged. It took him months, and much criticism from civil society, to finally issue a statement “condemning” the killings. His aloofness feels, at worst, like a tacit enabling of murder and, at best, an absence of sensitive leadership.

Most important, his behavior suggests he is tone-deaf to the widely held belief among southern Nigerians that he promotes a northern Sunni Muslim agenda. He was no less opaque when the Nigerian Army murdered hundreds of members of a Shiite Muslim group in December, burying them in hastily dug graves. Or when soldiers killed members of the small secessionist pro-Biafran movement who were protesting the arrest of their leader, Nnamdi Kanu, a little-known figure whose continued incarceration has elevated him to a minor martyr.

Nigerians who expected a fair and sweeping cleanup of corruption have been disappointed. Arrests have tended to be selective, targeting mostly those opposed to Mr. Buhari’s government. The anti-corruption agencies are perceived not only as partisan but as brazenly flouting the rule of law: The Department of State Security recently barged into the homes of various judges at midnight, harassing and threatening them and arresting a number of them, because the judges’ lifestyles “suggested” that they were corrupt.

There is an ad hoc air to the government that does not inspire that vital ingredient for a stable economy: confidence. There is, at all levels of government, a relentless blaming of previous administrations and a refusal to acknowledge mistakes. And there are eerie signs of the past’s repeating itself — Mr. Buhari’s tone and demeanor are reminiscent of 1984, and his military-era War Against Indiscipline program is being reintroduced.

There are no easy answers to Nigeria’s malaise, but the government’s intervention could be more salutary — by prioritizing infrastructure, creating a business-friendly environment and communicating to a populace mired in disappointment.

In a country enamored of dark humor, a common greeting among the middle class now is “Happy recession!”

Chimamanda Ngozi Adichie is the author, most recently, of the novel “Americanah.”