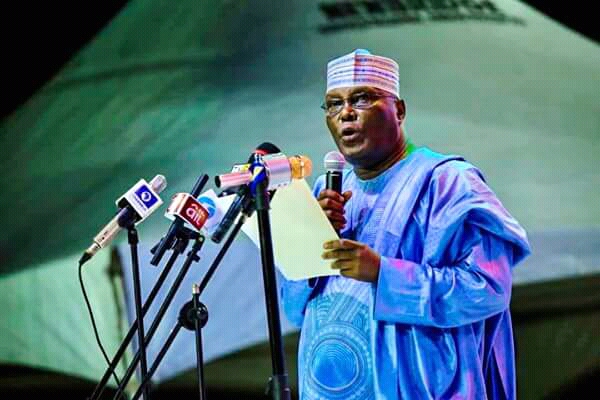 Governor Ibrahim Dankwambo, one of the contestants. who lost the nomination ticket to former Vice President Atiku Abubakar, has congratulated the presidential candidate of the Peoples Democratic Party (PDP).

In is twitter handle, ‏ @HEDankwambo, he said: “Congratulations to Former Vice President of Nigeria, His Excellency, Alhaji Atiku Abubakar on his emergence as the flag bearer of our great party, the People’s Democratic Party.

We are united under one Umbrella and we will work assiduously for our party’s victory in 2019.’’

Governor Nyesome Wike of Rivers state also congratulated the four time presidential candidate, Abubakar, for the winning the party’s ticket to stand for the fifth time in 2019.

Caustic critic of APC, Reno Omokri also tweeted @renoomokri “HE @atiku Abubakar is the next President of Nigeria by God’s Grace. If you believe, all I ask is just for you to comment by saying Amen!’’

At the end of the count of the votes at the presidential primary of the Peoples Democratic Party (PDP), Abubakar polled 1,532 to clinch the ticket.

The Fulani-born Waziri of Adamawa, businessman and politician beat 11 other contestants to face another tribesman, incumbent President Muhammadu Buhari in the February 2019 presidential election.

Atiku, a native of a Fulani village of Jada in Adamawa state, was earlier at the end of votes sorting declared the winner of the primary by his agents Messrs Gbenga Daniel and Ben Bruce.

With the win, Atiku Abubakar would have to face incumbent President Muhammadu Buhari of APC and Mr Donald Duke of Social Democratic Party (SDP) and some others in the February 2019 presidential election.

About 3,274 delegates were at the Adokiye Amiesimaka Stadium in Port Harcourt and took part in the primary which produced the following results.

72-year-old Abubakar, a businessman, who served as the second elected vice-president of Nigeria from 1999 to 2007, on the platform of the People’s Democratic Party (PDP), with President Olusegun Obasanjo.

Abubakar worked in the Nigeria Customs Service for twenty years, rising to become the Deputy Director before he retired in April 1989 to go into politics.

He ran for the office of governor in the Gongola State (now Adamawa and Taraba States) in 1991, and for the Presidency in 1993, placing third after MKO Abiola and Babagana Kingibe in the Social Democratic Party (SDP) primaries.

In 1998 he was elected Governor of Adamawa State. While still Governor-Elect he was selected by the Peoples Democratic Party (PDP) Presidential candidate Olusegun Obasanjo as his running mate.

The duo went on to win elections in February 1999, and Abubakar was sworn-in as Nigeria’s second democratically elected vice president on 29 May 1999.

Abubakar’s second term as Vice President was marked by a stormy relationship with President Obasanjo.

Abubakar ran for presidency on the platform of the Action Congress, having quit the PDP on account of his issues with President Obasanjo.

Abubakar lost the election, placing third after Umaru Yar’Adua and Muhammadu Buhari of the All Nigeria Peoples Party (ANPP).

He joined the ruling All Progressives Congress (APC) and sought the party’s ticket in 2014 but lost to President Muhammadu Buhari at the primary held in Lagos.

Abubaker defected again in May to PDP where he on Sunday clinched the ticket to tackle incumbent President Buhari in the 2019 presidential election.

Abubakar is a co-founder of Intels, an oil servicing business with extensive operations in Nigeria and abroad and founder of the American University of Nigeria (AUN)