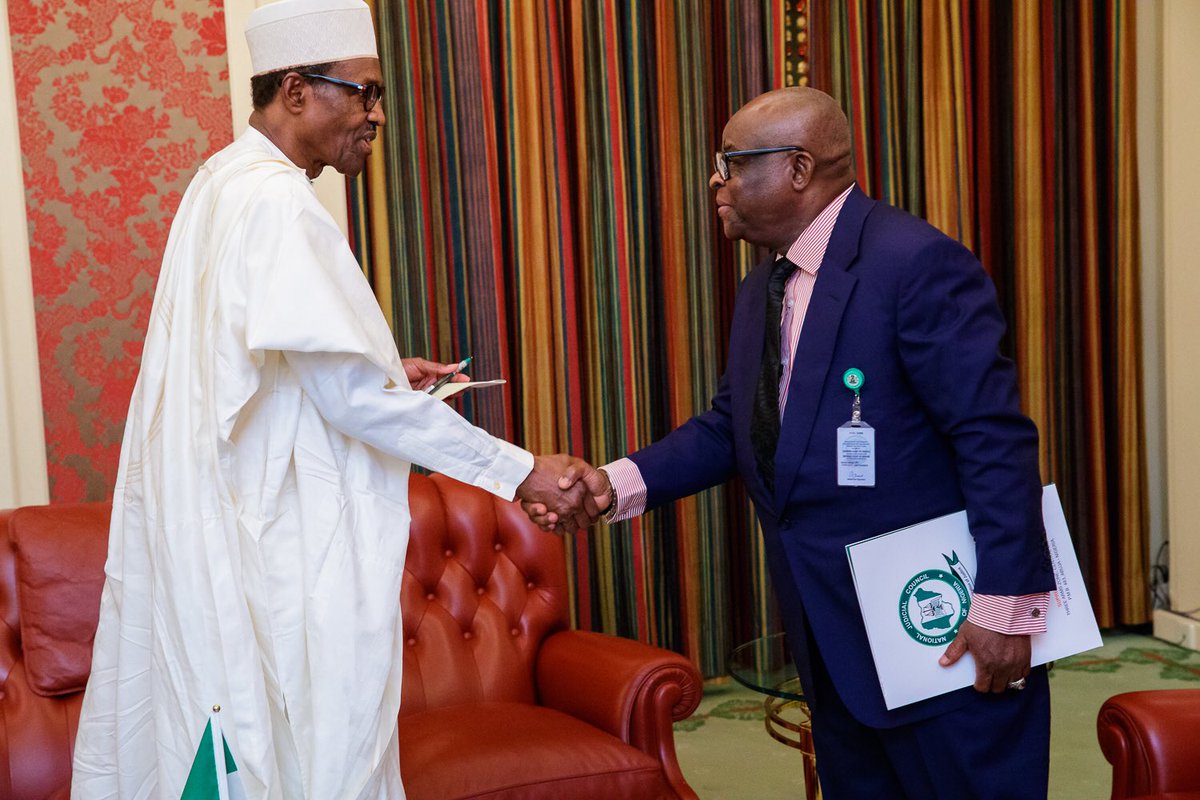 The embattled Chief Justice of Nigeria, CJN, Justice Walter Onnoghen has been asked to honourable take the exit door before its too late.

Recall that the Federal Government had ordered Justice Onnoghen to immediately vacate his office.

The Federal Government among others is accusing Nigeria’s Head of the Judiciary of refusal to declare his assets in breach of the provision of the Code of Conduct Bureau Act.

He was billed to appear before a Code of Conduct Tribunal, CCT, on Monday but failed to show up.

Speaking on the development, the Coalition for Change in Nigeria, said from its finding, contrary to the political, ethnic and religious colouration it is being given, the trial of Justice Onnoghen was not about President Muhammadu Buhari or the All Progressives Congress (APC).

President of the coalition, Patriot Sabo Odeh, who addressed a press conference on Wednesday, called on the CJN to take the path of honour by resigning his appointment and consequently vacate his office to face trial.

See full text of his speech below:

Nigerians have again been subjected to a spectacle of shame with the ongoing but needless controversy over the arraignment of the Chief Justice of Nigeria, Justice Walter Onnoghen, before the Code of Conduct Tribunal over his alleged failure to properly declare his assets and operating foreign domiciliary bank accounts. We call the controversy a shame because it has exposed the sham in the constant agitation for a paradigm shift that some of our compatriots put up for a show.

We have noted that the matter, which is glaringly an open and close case since flagrant violation of the Constitution and legislation emanating from it have been established against Justice Onnoghen. But in an atmosphere that has been hijacked by a feral opposition it is not surprising that the case has been turned on its head and given all manners of colourations, all with the sole aim of allowing another person that has abused his position of trust to escape repercussions.

In the past few days, we have seen the People’s Democratic Party (PDP) issuing statements and threats that have only gone to confirm that the embattled Chief Justice is a closet member of the party.

The party has issued several threats and continued to reiterate them such that with the benefit of hindsight there is now substance to the claims previously made by some groups and persons that the PDP, certain of a resounding trouncing and defeat at the polls, has compromised the judiciary in order to fraudulently take over the government of the country through frivolous court ruling, particularly the position of the President. It has therefore wrongly concluded that Justice Onnoghen is being tried after his secret deal with the PDP was found out. In street parlance, such behaviour is greeted with the exclamation of “guilty conscience”.

We have since found out that the huge crowd of lawyers, 30 Senior Advocates of Nigeria (SAN) and more than 100 junior lawyers, that turned up to represent the Chief Justice were retained by members of the PDP. Many of these PDP members that hired the lawyers for Justice Onnoghen are candidates in the forthcoming elections and will likely have post-election litigations that will proceed from Elections Tribunals to the Supreme Court. This has further exposed His Lordship to conflict of interest, which he seems unable to resist.

The governors of five south-south states, with the exclusion of Governor Godwin Obaseki of Edo state, elevated themselves above the Constitution of the Federal Republic of Nigeria by directing the Chief Justice not to keep his appointment with the Code of Conduct Tribunal.

It is troubling that Justice Onnoghen deferred to the directive of the five governors thereby placing them above the Constitution of the Federal Republic of Nigeria, which established the Code of Conduct Tribunal and empowered it to summon public office holders that are deemed to have cases to answer before it. Without prejudice to the eventual outcome of the case filed before the Tribunal, the fact that His Lordship would rather toe the line ruled by regional governors to violate the Constitution being the Chief Interpreter of the Law has proven that he has no business occupying his current post. It is most nauseating that among those that have been hired to help Justice Onnoghen evade the law are Niger Delta militants.

The militants have threatened to resume hostilities against the Nigerian state should the Code of Conduct Tribunal go ahead with the trial. Even if he was constrained to be unable to distance himself from the PDP to the extent that the Chief Justice has refused to reject the support offered by the militants, we see their threats on several levels. The first is that the threats prove that His Lordship has all along been the Chief Justice of the Niger Delta and not that of Nigeria, which makes his continued parade as CJN untenable even if there was no charge against before the tribunal.

Secondly is the absurdity of the Chief Justice accepting the support of a group whose members are certain to appeal the sentences for their crimes against Nigeria before the Supreme Court; the support they have given him today has bought them influence with the Court in future. Additionally, any patriotic Nigerian should condemn groups that attempt to get their way by a threat of violence as the militants have done by threatening to resume attacks against Nigeria.

The only honourable thing Justice Onnoghen has done in the entire saga was to set the record straight by disproving the fake news deployed by one Femi Fani-Kayode and one Yinka Odumakin to the effect that the Economic and Financial Crimes Commission (EFCC) has surrounded his residence. The fact that the Chief Justice disprove the fake news is an indication that he could have also disowned the support from the Niger Delta militants and also disregard the directive from the south-south governors if he had wished to. We see him allowing this controversy to fester because he views it as an escape route from facing the consequences for his breach of the law.

The Coalition for Change in Nigeria, from the foregoing, is convinced that contrary to the political, ethnic and religious colouration it is being given, the trial of Justice Onnoghen is not about President Muhammadu Buhari or the All Progressives Congress (APC). It is about embracing the new Nigeria where there are a no different set of laws for Nigerians, a country where judiciary plays its role for the sustenance of our democracy because those presiding over its affairs place themselves above board.

Justice Onnoghen may wish to place a call to the Deputy Chief Justice of Kenya, Justice Philomena Mwilu, who has not only been arraigned and being tried for corruption but was arrested prior to being charged. A former Chief Justice of Nepal, Justice Gopal Parajuli, is another buddy that the Chief of Justice of Nigeria may want to interact with to find out how false declaration could hurt careers as he was sacked for false age declaration.

In recent days, the Chief Justice’s case has been politicised, made to appear like ethnic persecution, has been a source of terror threat against Nigeria and the key personae has encouraged this behaviour with his silence. The preservation of Nigeria is at the core of expectations from the judiciary and if the number one person in the judiciary has shown that he is not interested in the oneness and the harmonious existence of the country there is no need to continue trusting his leadership of that arm of government.

He has also compounded whatever allegations there are against him before the Code of Conduct Tribunal by accepting representation from lawyers paid for by chieftains of PDP, who will be litigants before the Supreme Court in a matter of weeks. This is a clear case of conflict of interest. His conflict of interest has been further compounded with the acceptance of support from militants that could be appealing convictions before his court.

The judiciary has been compromised by someone with moral burdens of this magnitude being in charge. We therefore boldly declare that the Chief Justice of Nigeria, Justice Walter Onnoghen has lost the moral standing to continue to remain in that capacity. Justice Onnoghen should therefore honourably resign before it is too late for what would be left once honour has deserted him is  shame.

Copyright 2019 SIGNAL. Permission to use portions of this article is granted provided appropriate credits are given to www.signalng.com and other relevant sources

In this article:Coalition for Change in Nigeria, Justice Waler Onnoghen, PDP