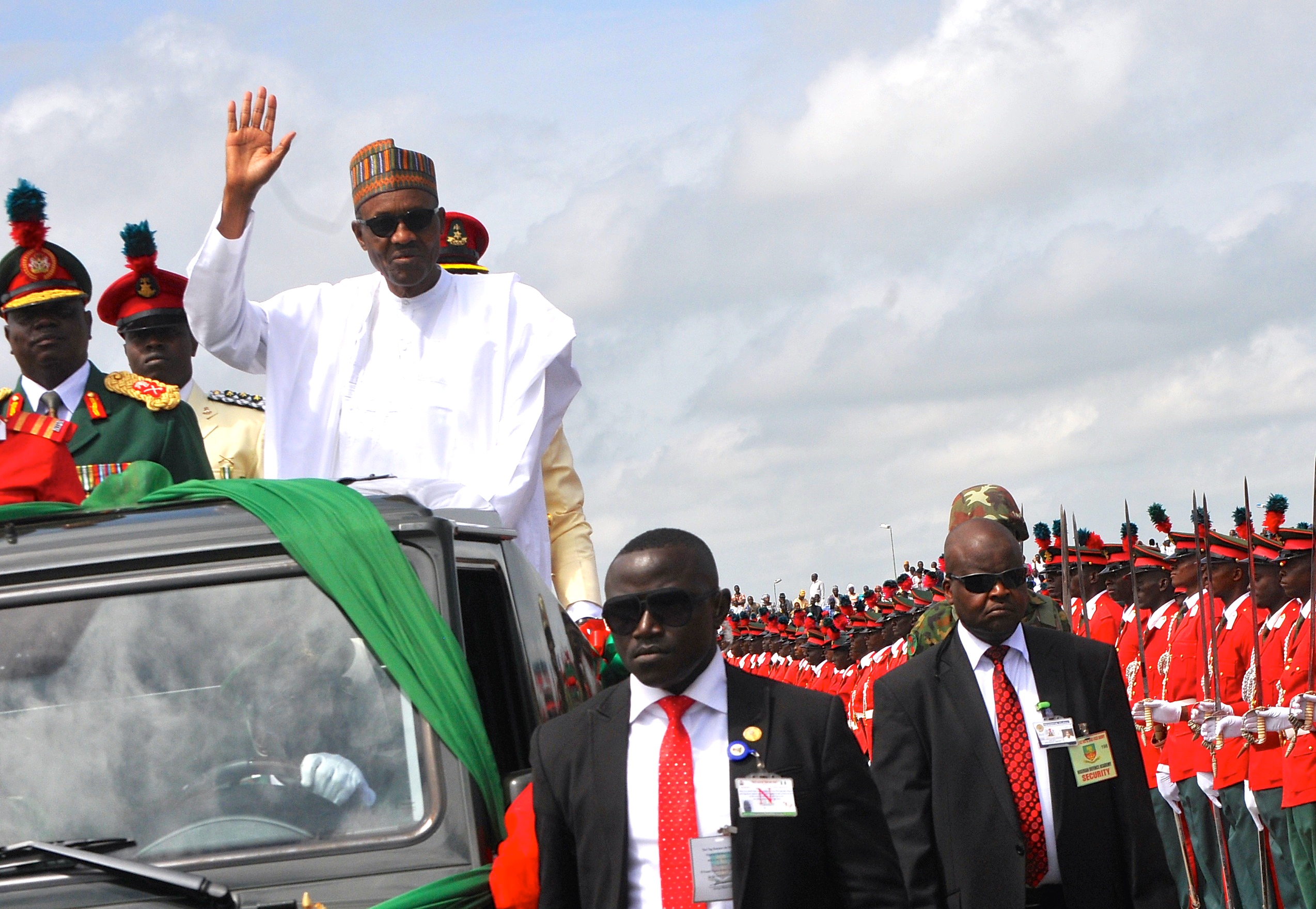 PIC 1. PRESIDENT MUHAMMADU BUHARI ARRIVING FOR THE COMBINED PASSING OUT PARADE OF CADETS OF 62 REGULAR COURSE AND SHORT SERVICE COURSE 43 OF THE NIGERIAN DEFENCE ACADEMY (NDA) IN KADUNA ON SATURDAY (12/9/15). 6577/12/9/2015/SP/ICE/NAN

The People Democratic Party has called on the President Mohammad Buhari to stand up for justice and equity and stop all undemocratic attitudes.

The PDP made this known in a communique signed by Prof. Adewale Oladipo after a meeting on Thursday in Abuja

The PDP caucus reviewed the political developments in the nation’s polity and resolved as follows.

A: That there is serious cause for concern in the nation’s political
environment, especially as it concerns the survival of the nation’s
democracy.

B: That the gains recorded in the 16 years of nurturing of democracy in
the country by the PDP is rapidly being eroded with non-functioning of
basic tenets of democracy and perpetuation of actions tilting towards
dictatorship.

C: That the insensitivity of the ruling government to very critical
issues being raised by the opposition is a huge threat to viable
democracy and dangerous to the peace, unity and progress of the country.

D: That the undue interferences by the executive arm of government on
the activities of the judiciary, legislature and INEC using the
Directorate of States Services (DSS) is clearly unacceptable to the PDP
as well as the Nigerian people and the party resolved to vigorously
resist such.

E: That the party finds it offensive and provocative, the judiciary’s
handling of cases involving it in election tribunals in some states,
particularly, Akwa Ibom, Rivers, Imo, Taraba, Ogun, Plateau and Lagos
states.

The tainted judgments of these tribunals, which are evidently
products of arm-twisting from the nation’s security operatives under the
direct command of an APC member remains unacceptable to us.

F: The PDP states that the conclusive evidence of external influence on
the Rivers State governorship election tribunal is the fact that it was
able to deliver its judgment within 24 hours, in a case that had nearly
100 witnesses, 1000 pieces of documentary evidences and nine counsel’s
final written addresses; each not less than 40 pages.

The decision, in view of the rather interesting history of the case, indicates that the judiciary, like the PDP and the Nigerian electorate are victims of the APC-led Federal Government.

G: The party expects the judiciary, as an institution to restore its
image by taking immediate measures to protect itself from political
interferences as well as ensure that needed steps are taken at the
appellate levels to remedy the embarrassing ruling by some of the
election petitions tribunals.

H: The party has also noted clandestine moves by the APC to use various
agencies of government, to manipulate the processes and rig the outcome
of the forthcoming governorship elections in Kogi and Bayelsa states in
their favour and vowed to deploy every means within the law to resist
such.

I: That the party calls on President Muhammadu Buhari, as the leader of
the country, to stand up for justice and equity and halt the undemocratic attitudes of agents of government in the interest of peace
and stability.

J: Furthermore, we salute the courage and unity of purpose of our
senators especially as demonstrated in the Senate chambers today in
their collective stand against impunity and corruption, in line with the
wishes and aspirations of the Nigerian people. The PDP states that what
the APC senators did today is a death knell on their party’s pretentious
war against corruption.

K: The PDP further notes that whilst former APC governors are being
rewarded with ministerial appointments, their PDP counterparts are being
hounded and harassed in the selective war against corruption.

L: The party finally reiterates its commitment to the unity of Nigeria
and the continued development of democracy in the country.

In this article:APC, Muhammadu Buhari, PDP