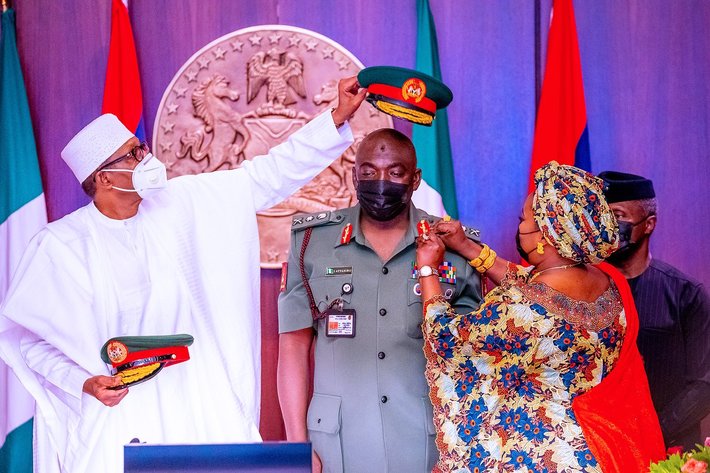 President Muhammadu Buhari has decorated the new Service Chiefs at an event held in the Council Chamber at the State House.

President Buhari during the ceremony told the new service chiefs that they only a few weeks to secure the country.

The new service chiefs were accompanied to the State House by their wives and other senior officers of the Nigerian Armed Forces.

He said he expects that before the rainy season, they would have secured the country to the level that farmers who had fled their farms in different parts of Nigeria would have developed enough confidence to return to their farms.

Speaking to Correspondents after the ceremony, the Chief of Defense Staff, General Lucky Irabor told State House correspondents that Nigerians cannot continue to live in fear. He gave the assurance that the era of Nigerians living in fear will now be a thing of the past.

The decoration of the new service chiefs comes after the National Assembly confirmed their appointment.

Senate President Ahmad Lawan during the confirmation advised the new service chiefs to take the insurgency war to the terrorists and bandits and dislodge them from their enclaves.

He reminded them to be conscious of the fact that Nigerians expect a lot from them to address the security problems confronting the country.

Also, the House of Representatives confirmed the Service Chiefs in February after they were called upon to share their portfolios as well as their visions.