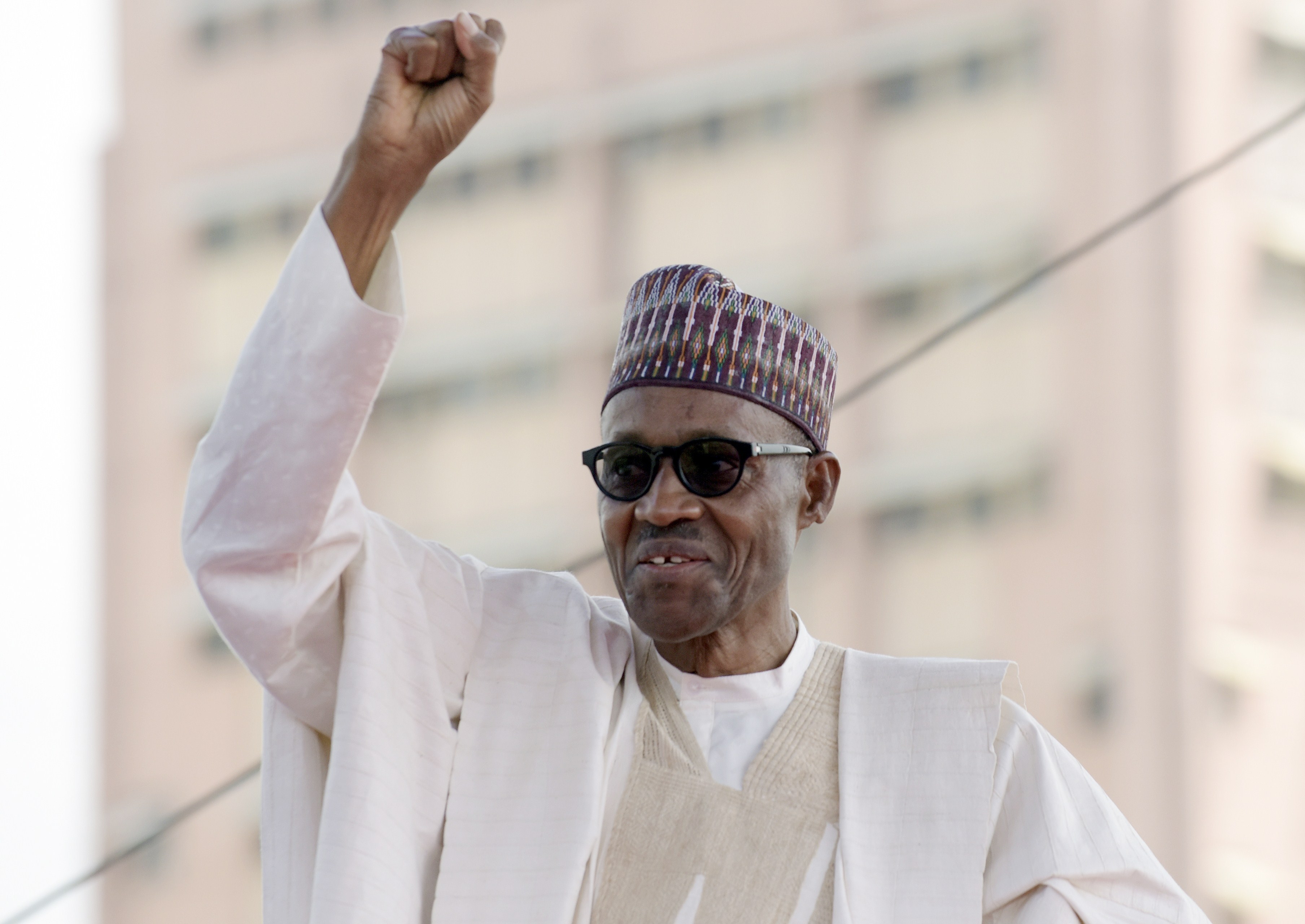 Nigerian President Mohammadu Buhari raises his fist to greet the crowd before taking oath of office at the Eagles Square in Abuja, on May 29, 2015. Buhari, 72, defeated Jonathan in March 28 elections -- the first time in Nigeria's history that an opposition candidate had beaten a sitting president. AFP PHOTO/PIUS UTOMI EKPEI (Photo credit should read PIUS UTOMI EKPEI/AFP/Getty Images)

” Look at our collapsing public utilities; our inefficient and wasteful parastatals and state- owned companies…if you want electricity, you buy your own generator; if you want water, you sink your own borehole; if you want to travel, you set up your own airline. One day soon, said a friend of mine, you will have to build your own Post Office to send your letters.”—Chinua Achebe ( 1983)

Nobody is persuaded to love him neither would anyone be induced to hate him. But President Muhammadu Buhari has more friends or admirers than foes. It is the experience of every popular and selfless leader. He attracts cult-like apostates, because he exudes the image of an emancipator.

Whatever is your emotions on President Buhari, your innermost, honest assessment still reminds you, the populism of this great and charismatic leader is waxing stronger. He has offered himself as a friend to his enemies, arch antagonists and even cretins, who delude in his malicious persecution.

Buhari has remained popular in Nigeria, Africa and the whole world for incontestable reasons. It is not controvertable that this leader can tolerate anything, except what is potent to impede or imperil the progress, development, peace and security of Nigeria. Meet him on this doorstep, you will find Buhari defiantly uncompromising.

As reflected by the erudite scholar and author, Chinua Achebe’s title of his book, President Buhari knows, “The Trouble With Nigeria,” (1983). Mr. President knows insecurity and endemic corruption are Nigeria’s infectious, immortal enemies, which must by crushed with a big hammer, relentlessly and with immediacy.

Achebe and a few other notable Nigerian patriots as well as the generality of the masses of Nigeria have encountered and grappled with these twine evils for decades. When President Buhari sauntered on the leadership podium in 2015, the fangs of insecurity and corruption had insanely blighted the serenity, peace and progress of Nigeria, the world’s most populous black nation.

These were the two basic, but very fundamental and monstrous problems the Nigerian masses identified as constituting everyday anxieties and nightmares to the people.

Nigerians had seen leaders and experienced different administrations, but these problems have rather accentuated, instead of waning. There were palpable frustrations, pains, agonies, and disenchantments in the land before Buhari’s ascension to the throne of leadership. The people yearned for a messiah; the masses wanted a leader who could exculpate them.

And God Himself delivered President Buhari to a traumatized and humiliated nation and a people for redemption. He has kept his eyes focused on this trajectory and has delivered shocking impacts.

Mr. President who is conversant with the covenant he made with the masses of Nigeria has neither deviated nor backslided in the last four years.

The Buhari Presidency has etched it’s name on the pysche of Nigerians and Africa as a populist administration for it’s exceptional and commendable exploits in surmounting Nigeria’s multifarious insecurity challenges, especially Boko Haram insurgency.

The Buhari Presidency, through a reformed and re-equipped Nigerian military, confronted Boko Haram terrorism like a wounded lion. And with a crack soldier, COAS and resilient leader of the counter- insurgency operations in Nigeria, like Lt. Gen. TY Buratai, Boko Haram insurgents have received more than they ever bargained or contemplated in the last four years.

Nigeria under Buhari has been able to stop Boko Haram bomb explosions in Abuja and any other Northern cities in the throes of terrorism. He has liberated multiple and all the LGAs under the captivity of Boko Haram. Religious and community leaders deposed by insurgents have been reinstated and kingdoms restored.

The likes of the Shehu of Bama and his Dikwa, Masa II counterpart, Ibn Umar El Kanemi, were some victims of insurgency who deserted their communities to reside in Maiduguri. They have all returned to their deserted communities; while the rehabilitation and re- construction process is steadily in progress.

Echoes of excited voices of thousands of Nigerians in gulags of Boko Haram as hostages reverberates everywhere in the Northeast. IDPs camps are becoming forlorn.

Evidently for the first time in five years, the Shehu of Bama Kingdom in Borno State, Kyari Ibn Umar El-Kanemi, and his people joined the rest of world in celebrating the global Muslim feast of Eid-el-Kabir in his domain. It’s quite relieving in every consideration.

Nigerians recall with much sadness the 2013 Boko Haram deadly massacres in Bama. Over 300 Nigerians lost their lives in that terrorists onslaught.The community was consistently the target of Boko Haram terrorists years back, forcing natives and other inhabitants to flee their ancestral homes. But Bama’s gory tales, like other communities have been positively rejigged.

Therefore, the Northeast is no longer an enclave where terrorism once reigned. Or Nigeria is no more under the spell of insurgency which ravaged Abuja, the nation’s capital almost on daily basis; or Bama where Kings were sent out of their kingdoms; women chased away from their homes and children dislocated and disconnected from their parents.

Boko Haram can longer lay claims to Gwoza as it’s administrative capital of conquered territories in the Northeast. This was where they cruelly tortured and slaughtered Nigerians.

Furthermore, other variants of terrorism which previously ravaged Nigeria in violent insurrections have been tackled by the Buhari Presidency. Nigerians now have respite from insecurity threats such as militancy in the Niger Delta; IPOB’s armed secession agitations in the Southeast; armed banditry and cattle rustling, farmers/ herders skirmushes; sectarian and ethno-religious upheavals.

No part of Nigeria is currently under the siege of terrorists and insurrectionists; detonating lethal explosives, executing reckless abductions of Nigerians or where rampaging killer swords holds sway in mindless bloodletting.

But where President Buhari has touched on the sore nerve of national consciousness defiantly is his anti-corruption campaigns. The anti-corruption battles against looters and economic vultures as spearheaded by anti-graft agencies such as the EFCC and the ICPC have posted stunning results.

Nigeria had the unenviable and notorious fame as corruption kingpins in Africa and around the world. The afflicting monster of corruption was not only endemic, but embarrassingly very pervasive.

As far back as 1983, Achebe succinctly and pitiably lamented the fate of Nigeria on corruption in his book; ” The Trouble With Nigeria,” when he stated;
“My frank and honest opinion is that anybody who can say that corruption in Nigeria has not yet become alarming is either a fool , a crook or else, does not live in this country.”

But pleasurably, President Buhari has silently changed the negative narrative which formerly foisted Nigeria on pariah status in the comity of nations.

Under Buhari’s administration and in just four years, there is massive recovery of looted Commonwealth in cash and properties as well as convictions of top -flight politicians and leaders who were hitherto untouchable. It was strange that though looters, these odious public servants were feted and treated like sacred cows, a disposition which emboldened others to intensify indulgence into corrupt practices.

At least, there is visible public apprehension and phobia in engaging in sleaze and fraud now, as against the competitive looting and plundering of public resources as obtained in the past. Nigerians are elated with President Buhari that sanity is gradually being restored and the country has rebounced on the path of progress on it’s match to the Promise Land under the leadership of Buhari.

Therefore, the consensus reached by Nigerians in 2015 that President Buhari is the right leader to turn the tide and reconfirmed it in 2019 with popular votes is not only rewarding for the reawakening of Nigerians, but has paid off handsomely.

It is the protective shield of Buhari and the reason his administration is on an unstoppable populist radar and insulated from fraudulently ambitious politcal hynas.

In this article:Muhammadu Buhari, NA, NPF