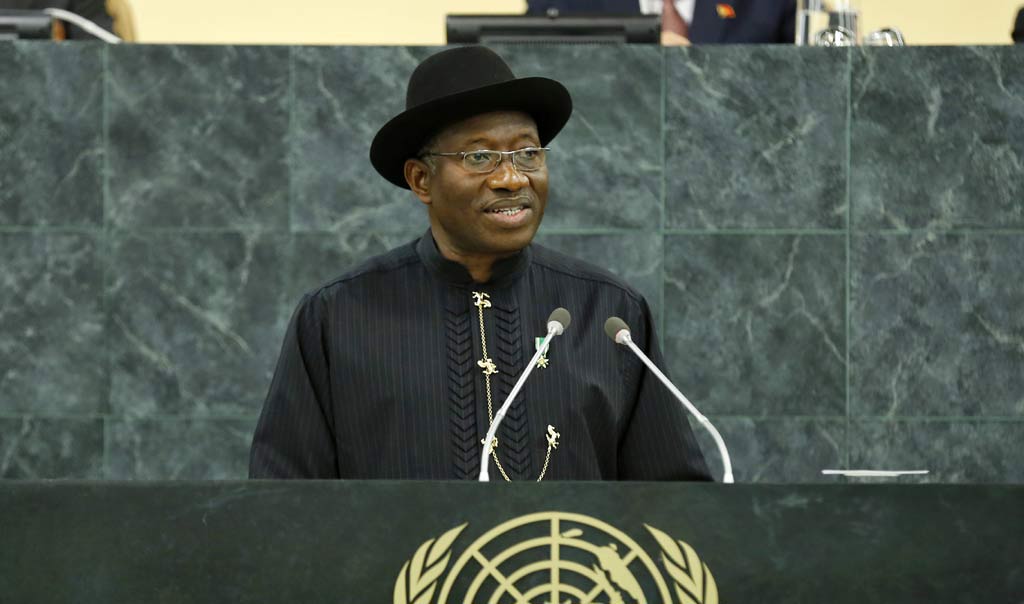 The president, in a democracy day broadcast this morning, said a war has been unleashed on Nigeria by extremist foreign elements collaborating with some misguided Nigerians.

According to him, the new challenge facing Nigeria is aimed at ruining the country as well as scuttling her democracy and freedom.

“It is a sad fact that as I address you today, all the gains of the past 15 years of democratic governance in our country are threatened by the presence of international terrorism on our shores. Our dear country, Nigeria is facing a new challenge. A war has been unleashed on us. Extremist foreign elements, collaborating with some of our misguided citizens, are focused on an attempt to bring down our country and the democracy and freedom we cherish and celebrate today, he said.

Jonathan said the abduction of the schoolgirls of Chibok, Borno State, had brought to the awareness of the entire world, the heartless brutality of the terrorists who, he said, wanted to instigate a descent into anarchy and balkanize Nigeria.

He regretted that in recent years, terrorist attacks had claimed the lives of many Nigerians, with many others injured or maimed, villages and communities destroyed putting the economy of some of our states in jeopardy.

He described terrorism as a global challenge which his administration could not allow  to continue. “There can be no doubt that what we are witnessing in Nigeria today is a manifestation of the same warped and ferocious world view that brought down the Twin Towers in New York, killed innocent persons in Boston and led to the murder of defenceless people in the Southern Russian city of Volgograd. Terrorist activities have brought war and pains to Mali, Somalia, Yemen, Syria, Afghanistan and Pakistan. These agents of evil continue to brainwash and incite ignorant young men and women to attack the innocent. We cannot allow this to continue”.

The president said he welcomed the statements of solidarity from patriotic Nigerians and the global community in support of his efforts to stamp out terrorism.

According to him, “in a democracy, such as we’re building, people can have differences while sharing worthy values and standing together in opposition to the scourge of terrorism. Nigeria is the only country we’ve and we must all work to preserve it for present and future generations”.

The president, who said the security forces deserved commendation despite the current challenges, stressed that they were adjusting and being equipped to fight the unconventional war by the terrorists.

“We must not forget their (Nigerian security forces’) gallantry and successes in liberating nations and in peacekeeping, from Liberia to Sierra Leone,  Congo, Sudan, Mali, Guinea-Bissau and many places in Africa and beyond. Our forces have paid the supreme price in several places at several times. Today, they face a different challenge, an unconventional war by terrorists. They’re adjusting and are being equipped to tackle the new menace of terrorism. We must show confidence in their ability”.

He also disclosed that he had instructed the security forces to launch a full-scale operation to put an end to the impunity of terrorists in the land.

He assured that he was determined to protect Nigeria’s democracy, her unity and political stability by waging a total war against terrorism, saying the unity and stability of the country as well as the protection of lives and property are non-negotiable. I’ve instructed our security forces to launch a full-scale operation to put an end to the impunity of terrorists on our soil”.

Jonathan stressed that he had also authorized the security forces “to use any means necessary under the law to ensure that this is done. I assure you that Nigeria will be safe again, and that these thugs will be driven away – it will not happen overnight, but we will spare no effort to achieve this goal”.

He said with the support of the citizenry, neighbouring nations and the international community, “we’ll reinforce our defence, free our girls and rid Nigeria of terrorists. It’s now 45 days since the horrifying abduction of the college girls of Chibok. I share the deep pain and anxiety of their parents and guardians and I assure them once again that government will continue to do everything possible to bring our daughters home”.

He said his administration’s doors remained open to the Boko Haram insurgents for dialogue and reconciliation if they renounce terrorism and embrace peace.

“For our citizens who have joined hands with Al Qaeda and international terrorists in the misguided belief that violence can possibly solve their problems, our doors remain open to them for dialogue and reconciliation, if they renounce terrorism and embrace peace. My government, while pursuing security measures, will explore all options, including readiness to accept unconditional renunciation of violence by insurgents, and to ensure their de-radicalization, rehabilitation and re-integration into the broader society”, he said.

He maintained that all Nigerians must remain united to win the war against terrorism, saying “Christians, Muslims, farmers, fishermen, herdsmen, teachers, lawyers, clergy or clerics, the rich, the poor and Nigerians from all sections of the country must work together with our security agencies and armed forces to overcome the terrorists who now threaten all that we hold dear”.

The president assured that though the war against terrorism might be difficult for the country, the days of peace would come again.

“Terror is evil; nowhere in history has evil endured forever. The menace of Boko Haram will surely come to an end. I believe that because of your prayers, your courage, hardwork, faith and sacrifice, we will ultimately prevail over the terrorists and all other evil forces. We are a strong, resilient and courageous people”, he said.

Jonathan said his government would continue to partner with the civilised world “to confront international terrorism and every other challenge that comes our way with patriotic zeal and determination. Yes, we’ve challenges, but we’ll surely overcome. Nigeria is our country. Nigeria is blessed. We’ll all collectively protect, defend and develop this country for ourselves, and our children”.

He noted that Nigeria had come a long way and made notable progress since her first democracy day on May 29, 1999 when the military finally relinquished power and handed over to a democratically-elected government.

He said although he had ordered a low-key commemoration of this year’s Democracy Day in deference to the current mood of the nation, the past 15 years, the longest period of sustained democratic governance in the country, had been a blessing to the country.

The president paid tribute to all those who played a part in restoring the nation to the true path of democratic governance built on the foundations of rule of law and freedom of expression.

“As a result of our collective efforts since 1999, democratic governance is now entrenched in our nation and institutions. I wholeheartedly believe that our people are the better for it. The scope of fundamental rights and liberties enjoyed by our people over the past 15 years has been expanded beyond measure. On my watch, we’ve witnessed high national economic growth rates, steady improvements and expansion of national infrastructure including airports and roads, the restoration of rail transportation, the efficient implementation of a road map for improved power supply, a revolutionary approach to agricultural production, as well as advances in education, sports, youth development, healthcare delivery, housing, water supply and other social services. In the oil and gas sector, our promotion of a sustainable local content policy, continues to guarantee equity and better opportunities for Nigerian entrepreneurs and skilled personnel.

“Significant increase in mobile telephone and national broadband penetration, making Information and Communications Technology (ICT) one of the fastest growing sectors of the Nigerian economy.

We’ve also developed strong financial markets and regulatory institutions. Our banks now have regional and global footprints. Nigeria has also gained recognition as the largest economy in Africa, the most preferred investment destination in the continent and in terms of returns on investment, the fourth in the world. We’re pleased that the world has noticed, as global leaders converged in Abuja early this month for the World Economic Forum in Africa. The event not only witnessed a record attendance, it brought the prospect of an additional flow of investment into the Nigerian economy estimated at over $68 billion over the next few years.

“In foreign relations, our country has equally done well within this period, by establishing and strengthening strong partnerships with all ECOWAS countries and the rest of the world. This has helped to deepen Nigeria’s leadership role in multilateral institutions including the United Nations. Furthermore, under this administration, we’ve made consistent progress in improving the standard of elections in our country to ensure that they’re ever more credible and truly representative of the people’s free choice.

He said his administration expected that the outcomes of the ongoing National Conference it initiated would help to further consolidate the gains made from democracy in the past 15 years and place Nigeria more firmly on the path to greatness.