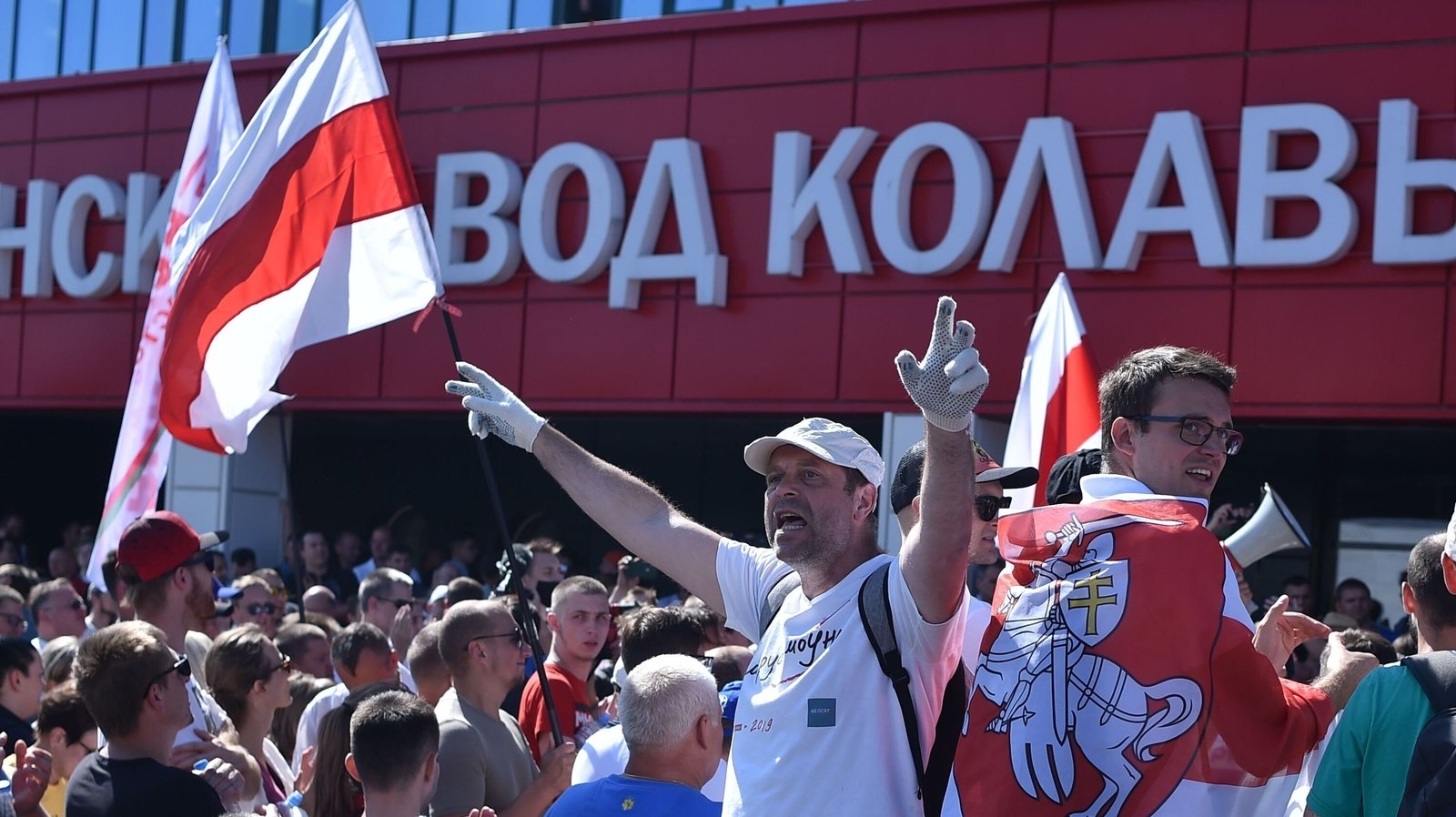 Workers at factories in Belarus answered opposition calls for fresh strikes on Monday after a historic weekend protest over President Alexander Lukashenko’s disputed re-election brought tens of thousands to the streets.
In footage widely shared on social media, Lukashenko was confronted by workers at the Minsk Wheel Tractor Plant (MZKT) who shouted him down with chants of “Leave!” as he tried to give a speech.

A visibly angry Lukashenko walked off the stage, saying: “Thank you, I have said everything. You can shout ‘Leave’.”

Pressure has been building on the ex-Soviet nation’s longtime leader since the August 9 election, which he claims to have won with 80 percent of the vote.

In the biggest demonstration to date, more than 100,000 people took part in a “March for Freedom” in Minsk on Sunday following calls from main opposition figure Svetlana Tikhanovskaya for continued demonstrations.

A brutal police crackdown on post-election protests has drawn widespread condemnation and appears to have turned even Lukashenko’s support base at state-owned industries against him.

European Union leaders are to hold an emergency video summit on Belarus on Wednesday, EU Council President Charles Michel announced, while Germany said it was prepared to back an expansion of previously announced sanctions.

Hundreds of workers and protesters gathered outside the MZKT plant where Lukashenko was visiting, waving the red-and-white flag of the opposition and demanding his resignation.

Workers at the Minsk Tractor Works (MTZ) also told AFP that several thousand staff had walked off the job.

After flying in by helicopter, Lukashenko told workers he would not give in to calls for a new election.

“You will never expect me to do something under pressure,” he was quoted as saying by his press service. “If anyone is unwilling to work and wants to leave, no one will harass you, do as you please, the door is open.”

Demonstrators also gathered outside the Minsk headquarters of state television, where some staff were reported to have joined the strikes.

“I know how scared you are, because we are all scared. Thank you for overcoming your fear and joining the majority,” Maria Kolesnikova, a senior opposition leader, told the protesters.

Workers of potash producer Belaruskali have also said they may go on strike, according to independent local news site tut.by. Potash, used to make fertiliser, is a major source of income for Belarus, which is one of the largest producers in the world.

Lukashenko has defied calls to stand down after the August 9 election that saw him imprison his closest rivals, shun independent observers and unleash a brutal crackdown on peaceful protesters who said he fabricated ballot results.

The opposition called for a general strike after hundreds of workers at state-run factories first downed tools last week in a sign that Lukashenko’s traditional support base was turning against him.

In a video posted online Monday, Tikhanovskaya said that although she never planned to enter politics she was prepared to take over the country’s leadership.

“Fate decreed that I’d find myself on the frontline of a confrontation against arbitrary rule and injustice,” Tikhanovskaya said in exile in Lithuania.

“I am ready to take responsibility and act as a national leader during this period.”

Tikhanovskaya has demanded the authorities release all detainees, remove security forces from the streets and open criminal cases against those who ordered the crackdown.

She has also said she will organise new elections if Lukashenko steps down.

Lukashenko, who has ruled Belarus for 26 years, is facing an unprecedented challenge to his leadership.

Pressure is growing at home and abroad and EU leaders last week agreed to draw up a list of targets for a new round of sanctions.

UK ‘watched with horror’
Britain said Monday it did not recognise the results of the “unfair” elections and called for an independent investigation into the results.

“The world has watched with horror at the violence used by the Belarusian authorities to suppress the peaceful protests that followed this fraudulent presidential election,” Foreign Secretary Dominic Raab said.

“The UK does not accept the results.”

NATO member Lithuania warned on Monday that Belarus had started military drills on its western border and accused Lukashenko of escalating tensions following the elections.

The Kremlin, which is Lukashenko’s closest ally, has said it is ready to step in if necessary through the CSTO military alliance between six ex-Soviet states.

More and more Belarusians have taken to the streets over the last week to denounce the election result and support Tikhanovskaya, a 37-year-old political novice who ran after other potential candidates including her husband were jailed.

In this article:Alexander Lukashenko, Svetlana Tikhanovskaya 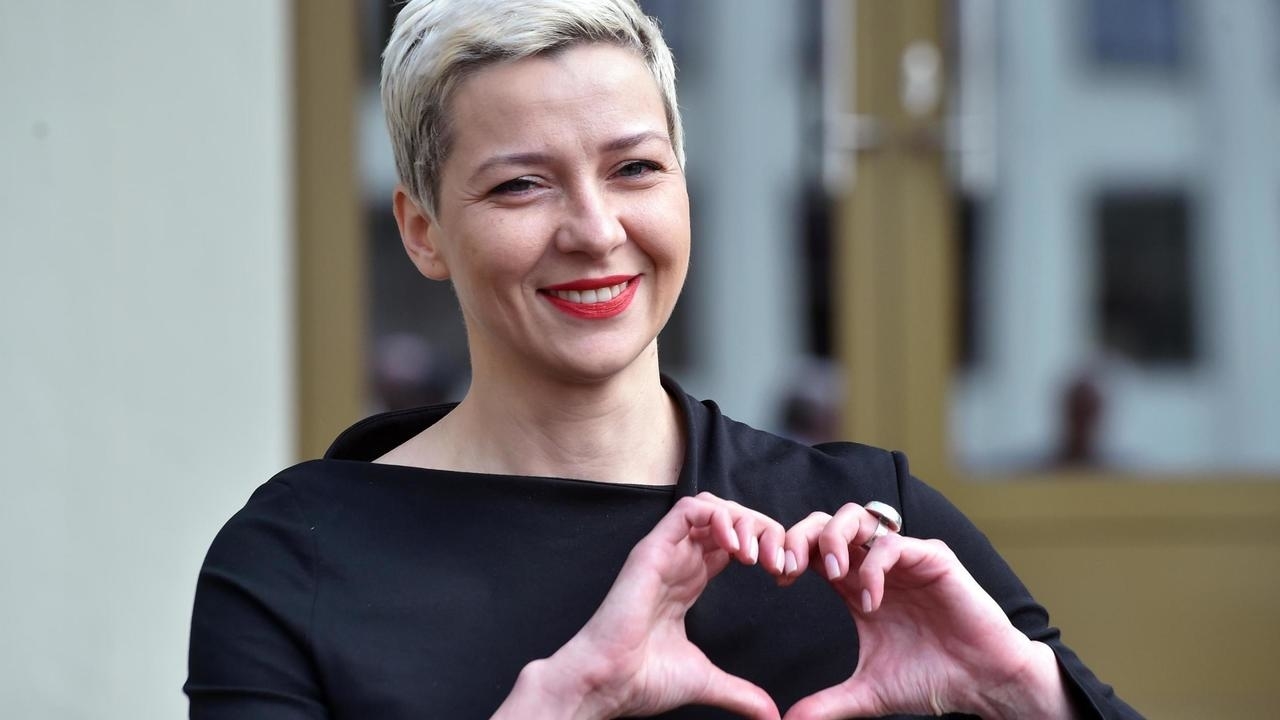