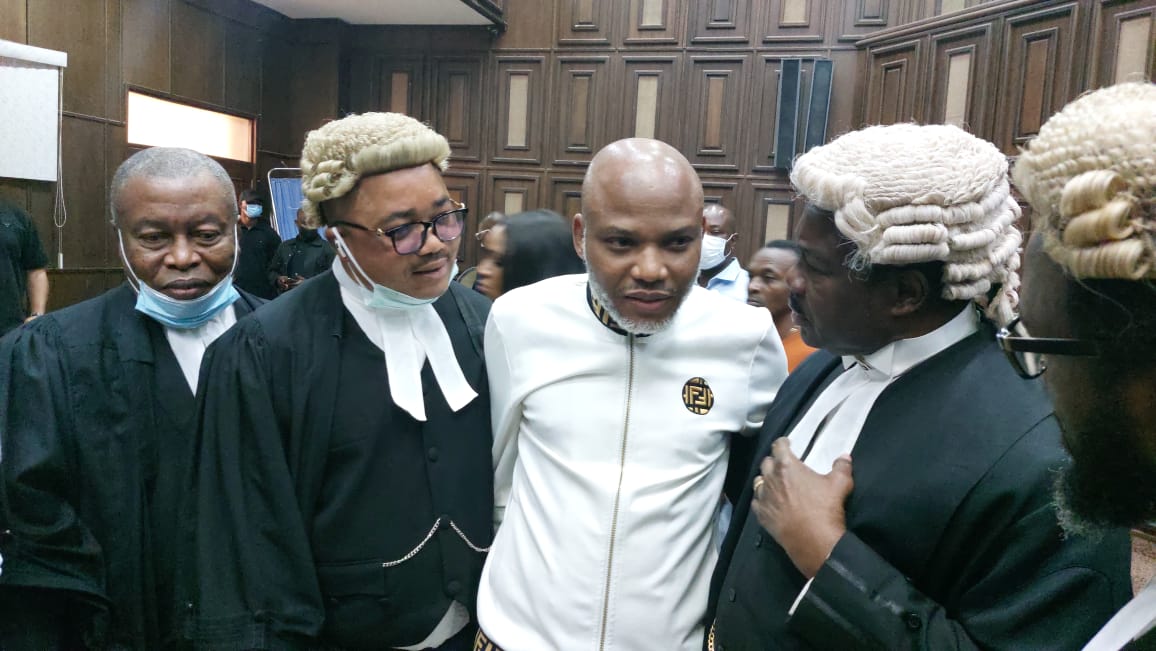 The Federal Government has filed an amended seven-count terrorism charge against the detained leader of the Indigenous People of Biafra, IPOB, Nnamdi Kanu, Vanguard reports.

Investigation revealed that the amended charge marked FHC/ABJ/CR/383/2015, which was entered before the Federal High Court in Abuja, contained all allegations against the IPOB leader that were earlier sustained by the trial court.

FG, specifically alleged that Kanu who is currently in custody of the Department of State Service, DSS, had as a member of an unlawful group, in a broadcast that was received and heard across Nigeria, issued a deadly threat that anyone who flouted his sit-at home order in the South Eastern part of the country, should write his or her Will.

It told the court that as a result of the threat; Banks, Schools, Markets, Shopping Malls, Fuel Stations domiciled in the Eastern States of Nigeria, have continued to shut down their businesses, with citizens and vehicular movements grounded.

FG further alleged that the IPOB leader had on diverse dates between 2018 and 2021, made broadcasts that were received and heard in Nigeria, inciting members of the public to hunt and kill Nigerian security personnel and their family members, thereby committing an offence punishable under Section 1 (2) (h) of the Terrorism Prevention Amendment Act, 2013.

More so, it alleged that Kanu directed members of the IPOB “to manufacture Bombs”, adding that the defendant had between the month of March and April 2015, “Imported into Nigeria and kept in Ubulisiuzor in Ihiala Local Government Area of Anambra State within the jurisdiction of this Honourable Court, a Radio Transmitter known as Tram 50L concealed in a container of used household items which you declared as used household items, and you thereby committed an offence contrary to section 47 (2) (a) of Criminal Code Act Cap, C45 Laws of the Federation of Nigeria 2004”.

Kanu had previously pleaded not guilty to the charge.

Already, trial Justice Binta Nyako has slated next Monday for both Kanu’s team of lawyers led by Chief Mike Ozekhome, SAN, and the prosecution counsel to address the court on the way forward in the matter.

The parties are to argue on whether FG could proceed to re-arraign the IPOB leader on the amended charge, despite the October 13 judgement of the Court of Appeal that discharged him of all the allegations, as well as appeals on the subject matter that are still pending before the Supreme Court.

In this article:Indigenous People of Biafra, IPOB, News, Nnamdi Kanu