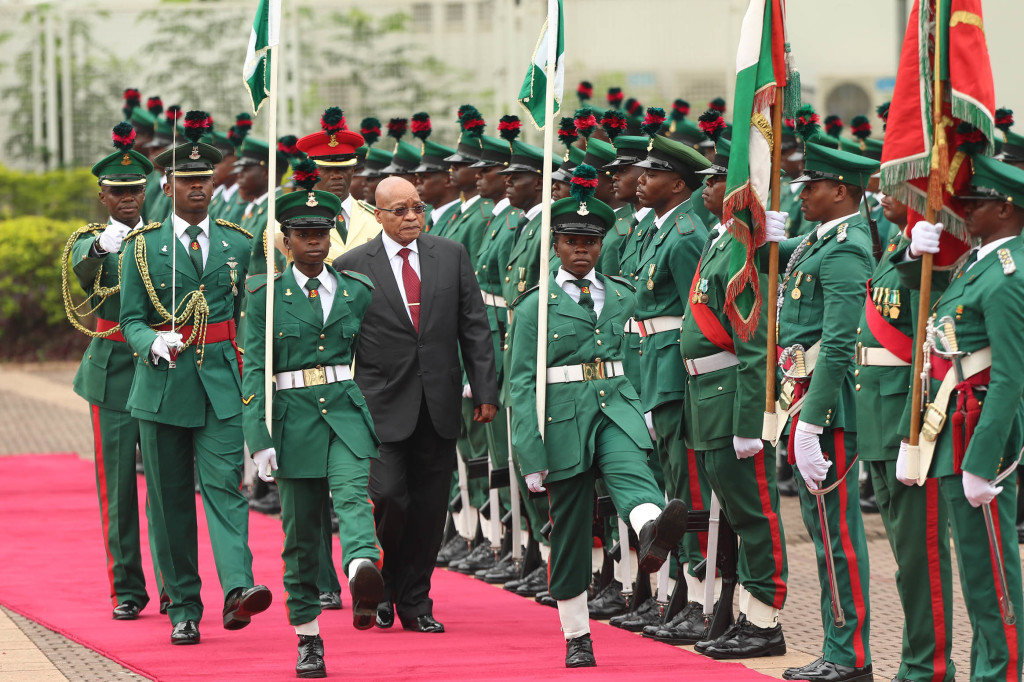 A few incidents in recent years revealed a deepening gulf between SA and Africa’s largest economy, but Nigeria rolled out the red carpet for Zuma as Africa’s superpowers try to revive their diplomatic and economic ties. The tension would have been palpable right up to the moment President Muhammadu Buhari accused SA of unwittingly aiding terrorism in Nigeria.

The countries have a long history of co-operation and conflict. After gaining independence in 1960, the Nigerian government vowed to help free other African nations from the clutches of colonialism. Nigeria played host to and supported ANC leaders in the 1970s. They included Zuma and his predecessor Thabo Mbeki.

But by the time the ANC came to power in 1994, it was skeptical of Nigeria’s military rule and its concomitant lack of respect for human rights. Nelson Mandela went as far as calling for Nigeria’s expulsion from the Commonwealth. The tensions reached boiling point after Sani Abacha’s government upheld the decision to execute writer and activist Ken Saro-Wiwa and a group known as the Ogoni Nine.

There were times when the relationship looked strong — when Mbeki and Olusegun Obasanjo sang from the same hymn sheet as leaders of their nations. Both articulated the need for improved governance in Africa and an effective African Union (AU), and drove that through the New Partnership for Africa’s Development.

But the relationship between the countries, whose leaders were generally of the same intellectual bent, deteriorated after 2007, when both countries’ political and economic climates waned.

Zuma and Buhari are on completely different tracks. Buhari took office last year on a graft-busting ticket. Zuma is in his second term and is buffeted by allegations that he is using his office to enrich one business family in SA and his own relatives.

But co-operation between the two leaders and between their countries remains key in a fractured continent that desperately requires cohesion between its superpowers.

The relationship between SA and Nigeria is “schizophrenic”, says Dianna Games, executive director of the SA-Nigeria Chamber of Commerce.

“It is a schizophrenic relationship, although there is a lot of goodwill, lots of friendship, and lots of history.”

The history is a strong foundation on which to build, says Games.

Nigeria’s new administration and leadership presents a good opportunity to improve the relationship. “When you have two leaders who are close and can really work together, that spirit of co-operation trickles down,” Games says.

During his visit to Abuja, Zuma had to work in the interests of the 120 or so companies operating in Nigeria — in an increasingly hostile environment in which local businesses are concerned about the “invasion” of South African capital.

The credibility, image and skills of a president are as important as the development and articulation of a country’s foreign policy. Zuma and his administration gravely lack these abilities.

His principle-free “friends of everyone” approach to foreign policy is criticised because of its inconsistency.

This is despite the fact that SA successfully bulldozed one of its own, Nkosazana Dlamini-Zuma, to the position of AU commission chairwoman. This was regarded as a successful exercise in muscle-flexing by SA and other Southern African countries that campaigned and voted for her in the face of strong resistance by central African and west African regions.

How this was done — and not necessarily that it was done — came at the expense of SA’s relationship with the west African power bloc, of which Nigeria is a dominant player. A power game played without the necessary diplomatic dexterity can do more damage than good in the long run.

There have been many diplomatic rows that offended both administrations since then. A sore point for Pretoria is the deadly Synagogue Church of All Nations building collapse — where 60 South Africans perished and scores of others were injured.

Nigeria loathes SA’s xenophobic violence, the visa difficulties its citizens face and the regulations that hamper its businesses entry into the country.

The problem that sticks out like a sore thumb is the MTN “scandal”. SA’s cellphone giant was slapped with a record $3.9bn fine by the Nigerian authorities for missing a deadline to discontinue unregistered subscribers. Last week, Buhari broke his silence on the matter at a joint news conference with Zuma: “The concern of the federal government is basically on the security and not the fine imposed on MTN. You know how the unregistered GSM are being used by terrorists.

“And between 2009 and today, at least 10,000 Nigerians were killed by Boko Haram. That was why NCC (the Nigerian Communications Commission) asked MTN, Glo and the rest of them to register GSM. Unfortunately, MTN was very, very slow and contributed to the casualties.”

Such statements are usually well-planned to make a visiting president squirm in discomfort, and to demonstrate to domestic stakeholders that their interests and views have been shared with the other party. Zuma is a thick-skinned politician and has had many such uncomfortable interactions in his seven years as SA’s first citizen.

Trade and foreign policy expert Tom Wheeler says the state visit was a very important one and the big delegation from the South African side showed the seriousness with which attempts to improve trade are being handled.

He says a lot of work needs to be done in to improve the relationship beyond the symbolism of the state visit. That includes getting rid of the regulatory bottlenecks frustrating businesses on both sides.

In a statement at the end of his two-day visit, Zuma said it was successful in reviving the relationship. “We view this state visit as being truly significant as it has taken relations between our two countries to a much higher level.

“The visit has sought to further deepen the historic relations between SA and Nigeria, which were forged during the struggle for liberation in our country.”

One of the highlights of the trip was Zuma’s address to the joint sitting of the Nigerian parliament, where he received a standing ovation — contrary to the ridicule and howls of anger he draws from the National Assembly in Cape Town.

The last visiting head of state to address the Nigerian parliament was former US President Bill Clinton in 2000.

Games agrees that the trip was successful. “It has been a while since the last high-profile engagement, which was former president Goodluck Jonathan’s state visit to SA in 2013.

There are initiatives that can be carried forward to improve the relationship, Games says. These include “improving the process and tenure of visas to foster stronger business ties by making it easier to travel to each other’s countries and create a more welcoming atmosphere on both sides”.