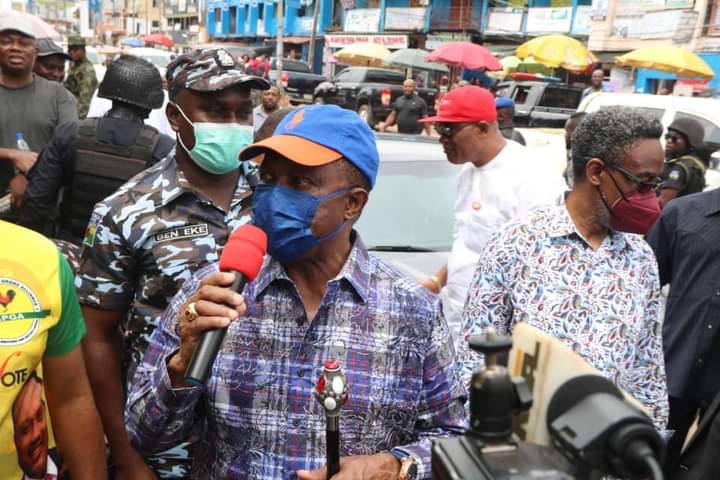 The Anambra State governor, Willie Obiano, on Monday led a protest against the continued sit-at-home order by the Indigenous People of Biafra.

Though IPOB had later suspended the order, residents had continued to stay at home every Monday apparently because of fear of possible attack by hoodlums.

On Monday, the state government moved to some streets in Awka, the state capital to enforce the return to businesses in the state.

The governor who led members of his executive council during the protest visited banks and markets at the state capital.

At Eke Awka market, the governor asked traders to open their shops.

He said, “The state must avoid giving urchins the chance to take over the helm of affairs. I chose to lead from the front to end this fear of molestation, harassment, intimidation.

Gingered by the governor’s action, socioeconomic activities, including transportation, banking and market activities sprang up around 1 pm in the area in earnest

Obiano had on Sunday threatened to seal banks and punish market and motor-park leaders who would dare stay at home on Mondays or any day so declared by the Indigenous People of Biafra.

He directed banks, markets and motor parks in the state to be in operation on Monday unfailingly.

He said the sit-at-home compliance adversely affected the Gross Domestic Product and the general economy of the state, stating that banks that failed to open on such days would be sealed for a week, adding that if such banks refused to open subsequently, they would be permanently closed.

While addressing transport leaders at the Governor’s Lodge, Amawbia, on Sunday Obiano said “I urged the commuters to feel free to ply their usual routes across the state on Monday, whether they ride or drive motorcycles, keke, shuttle, buses.

“If markets don’t open, I will sack the leadership of the market. If the market and park leaders don’t comply, their leadership will be changed within two weeks.”