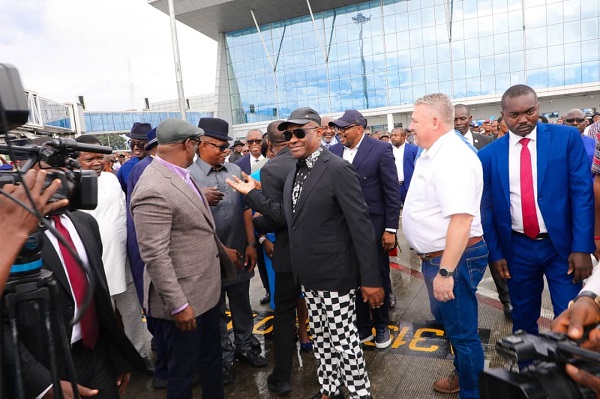 There was jubilation in Rivers State on Tuesday when the Legacy 600 aircraft recovered by the Nyesom Wike-led administration finally touched down at the Port Harcourt International Airport, Omagwa, Ikwere Local Government Area of the state, The Nation reports.

Rivers women and youths rushed to the airport to entertain people with their cultural displays designed to celebrate the return of the state-owned Legacy 600 Aircraft, which the Governor said was secretly abandoned in Germany by the immediate past administration.

Wike, who was on ground to receive the Legacy 600 aircraft, said that the recovery and eventual return of the lost asset of the state was a reality and not mere politics.

The Governor explained that it took intelligence report for his administration to discover such asset, owned by the Rivers State government.

According to him, the immediate past administration flew the aircraft to far away Germany, without any record of it made available to his administration.

He said: “To the glory of God, the plane is back and Rivers people can see, Nigerians can see, it is not that we are playing politics. All we are saying, we never knew, nobody told us until we got intelligence that we have this asset somewhere.”

He recalled that the Legacy 600 Aircraft was purchased by the Dr. Peter Odili’s led administration to serve the interest of Rivers people, but was abandoned with the General Atomics Aerotec in Munich, Germany by Chibuike Rotimi Ameachi’s administration since 2012.

He said: “What is very important to all of us here today is that when we came into power in 2015, nobody handed over any report or gave us handover note to let us know where such asset of the State was, only for us to hear in 2019 that this asset is somewhere.”

Wike said because air transportation was a more technical area, great care was taken to put the Legacy 600 Aircraft into its best form to undertake air travel effectively.

The Governor said that so much money was expended by the State government on the aircraft, money that he said would have been put into other developmental projects if his administration had known of the abandonment early.

He said in fixing the aircraft, certificate of air worthiness, issued by the Nigerian government, was secured for the aircraft to return to Nigeria.

He said: “Of course, we did everything we could do and we told Nigerians that the grace of God we will not allow this asset to go that way. We must return it for the people of the State to decide what they are going to do with it.

He said the State Government would decide how the asset would be used in furtherance of the state’s development.

Senator Barry Mpigi, who represents Rivers South East, commended Wike for his tenacity to defend the interest of the State.

According to him, the recovered aircraft is additional asset to the government and people of Rivers State

The chairman, Rivers State Traditional Rulers Council, His Majesty king Dandeson Douglas Jaja, said governor Wike had once again demonstrated his zeal to protect the interest of the State.

The King lauded the governor for not allowing the State property to get lost in Europe and unaccounted for.

The former Presidents of the Nigerian Bar Association, Onueze C. Okocha, SAN and Okey Wali, SAN said the State governor has proven that his determination to defend the interest of the State.