French President Emmanuel Macron is hosting the UAE leader in a bid to secure energy supplies from the oil-rich Gulf country as Europe prepares for the possibility of a total cut-off from Russian natural gas.

Mohammed bin Zayed Al Nahyan is in Paris on Monday on his first state visit to France since he was appointed president of the Western-allied nation in May. Sheikh Mohammed has been the nation’s de facto leader since 2014 and has built new alliances across the Middle East and Europe. He met US President Joe Biden over the weekend.

France has deep ties to the UAE and the two leaders have developed a personal relationship. It paid off during Macron’s visit to Abu Dhabi last year that resulted in a €16 billion arms deal with the Gulf ally, the largest-ever French weapons contract for export.

The leaders will focus on the war in Ukraine and the resulting energy supply issues for France and Europe, according to a French presidency official, speaking to reporters on condition of anonymity in line with customary policy.

The official added that Macron and Sheikh Mohammed are “working on the signing of a bilateral agreement on hydrocarbons and on guarantees for the supply of hydrocarbons” to France.

As the war in Ukraine approaches its sixth month and a sweltering heat wave grips countries across Europe, EU countries are bracing for a potential Russian gas shutdown amid soaring energy prices, inflation and a cost-of-living crisis across the 27-member bloc.

Russia has cut off or reduced natural gas — which keeps industry running, generates electricity and heats homes in the winter — to a dozen European countries in retaliation for sanctions resulting from the Ukraine war. A major gas pipeline also closed for scheduled maintenance last week, and there are fears that flows through Nord Stream 1 between Russia and Germany will not restart.

Leaders have been scrambling to fill underground storage by the beginning of autumn in an effort to avert an economic and political crisis in winter. Italian Prime Minister Mario Draghi is visiting Algeria on Monday to finalise deals boosting natural gas supplies from the North African country to Italy.

Macron said last week that his government would prepare a “sobriety plan” to conserve energy and that France is still seeking to diversify its gas sources. He called for a faster shift toward offshore windfarms and more European cross-border energy cooperation “as we prepare ourselves for the scenario where we have to go without all Russian gas.”

French Finance Minister Bruno Le Maire said last month that the country has been in discussions with the UAE regarding supplies of oil and diesel to find “an alternative to Russian petrol.” The UAE could provide a “temporary solution,” Le Maire told the French radio station Europe1.

TotalEnergies CEO Patrick Pouyanne said in parliament last week that the French energy giant is “discussing an agreement to have access to diesel and fuel from the Emirates this winter.”

He said the company’s efforts are part of the French initiative to secure sufficient energy and make up for loss of Russian supplies.

The UAE’s energy exports to France are dominated by refined petroleum products and reached the record sum of €1.5 billion in 2019.

The UAE holds the seventh-largest proven reserves of natural gas in the world, at over 215 trillion cubic feet, according to estimated figures from the US Energy Information Agency. The country, which lies on the eastern coast of the Arabian Peninsula along the Persian Gulf, is among world’s 10 largest oil producers, with most of country’s oil and gas wealth concentrated in Abu Dhabi.

Human rights groups have called on Macron to remind his UAE counterpart of his country’s poor human rights record.

“For years, the UAE has systematically crushed dissent,” Human Rights Watch said in a statement ahead of Monday’s visit. “Activists, lawyers, teachers, students, and those deemed critics are arrested, prosecuted, and detained, women and LGBT people face discrimination.” 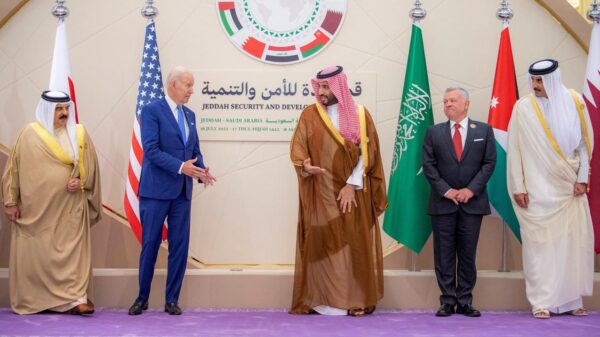 President Joe Biden closed the final leg of his four-day trip with a visit to a summit of Arab nations on Saturday to lay...