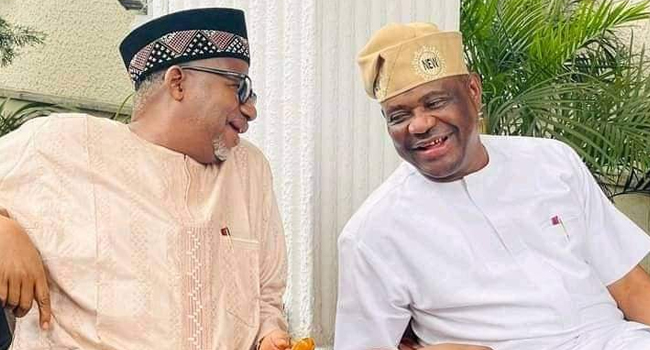 Bauchi State Governor, Bala Mohammed, says he shares something in common with the ‘G5 governors’ led by Rivers State Governor, Nyesom Wike and highly connected with them, Daily Trust reports.

Atiku had made a move to woo the Bauchi State governor. But Wike on Wednesday led his colleagues to Bauchi to visit Mohammed, who spoke to newsmen shortly before a closed door meeting at the Presidential lodge popularly known as Ramat House.

The visitors had described their coming as solidarity and fraternity visit.

The governors in attendance were Wike, Ortom, Ikpeazu and Ugwuanyi, while Makinde was said to be in the United States.

Mohammed said he was happy to receive the governors in Bauchi.

He said, “The governors of G5, they called themselves ‘Integrity Group’. I am supposed to be with them but they excommunicated me for some reason best known to them. But I am highly connected with them, each and every one of them. There is no day that I don’t call to speak with each of them.

“Because in politics, you go with the people that you share something in common with. The presidency that we ran where my brother was defeated and he defeated me has brought us close. Of course, at the Governors’ forum, one thing I appreciate about them is that they look at your challenges. Even though they are not running for a second term, they are always worried.

“We have something in common. They know that I have challenges of anti-party, challenges of some treachery and mischief and of course politics is about all these but when you know that you have people behind you, of that stature and that calibre you feel fulfilled.”

Earlier in his remark, Wike said, “We come here in solidarity with our friend, the Governor of Bauchi State. We know that he’s running for a second term in office and what we are doing to those of our friends is to find out how things are with them, how the elections are going. This period is a period to identify with your friends.

“Luckily, four of us that are here are not running for a second term in office, even though they are running for senate, I’m the only one who is not running for any elective position after I failed at the (presidential) primary. Going forward, nothing more but just to fraternise with him. If there is any area we can help and advise (we will), because what affects him also affects us. Nothing more than that, just to say how are you doing and planning.”

Three victims are receiving medical attention in an undisclosed hospital after suspected political thugs swooped on a team of supporters of Atiku Abubakar, presidential...