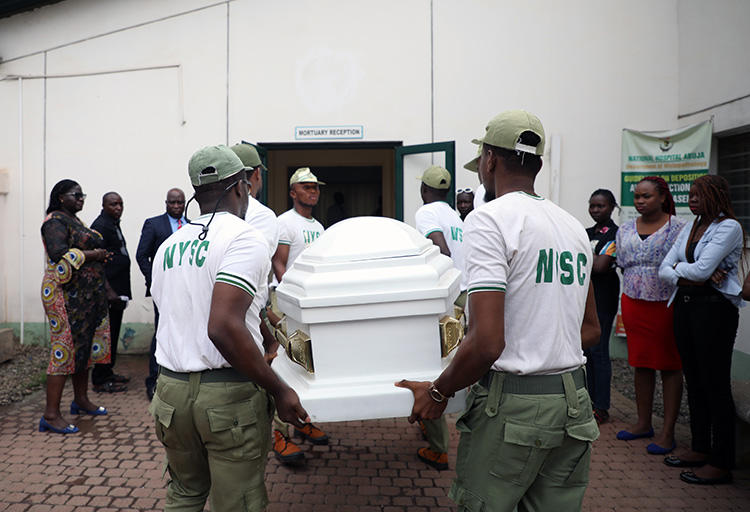 Members of National Youth Service Corp carry the body of their colleague, a 22-year-old trainee journalist shot dead during clashes between policemen and Shiite Muslims demanding the release of their detained leader Ibrahim Zakzaky, on July 23, 2019 in Abuja. - At least eight people were killed in clashes between Shiite Muslim protesters and Nigerian police in Abuja on July 22, with a journalist among those shot dead in the latest bloodshed over the detention of a religious leader. A policeman was also killed in the unrest, which broke out when hundreds of protesters from the Islamic Movement in Nigeria (IMN), a Shia sect, marched demanding the release of cleric Ibrahim Zakzaky, who has been held since December 2015 on charges including terrorism. (Photo by KOLA SULAIMON / AFP)

Nigerian authorities should immediately investigate the death of Precious Owolabi, a reporter for the privately owned Channels TV, who was shot during a protest in Abuja on July 22, and ensure those responsible are held to account, the Committee to Protect Journalists (CPJ) said in a statement on Thursday.

Owolabi, 23, was shot while covering a confrontation between Shiite Muslim protesters and Nigerian police, and died the same day after being taken to a hospital, according to a Channels TV broadcast uploaded to its YouTube page. He had been covering a protest over the detention of Ibrahim Yaqoub El Zakzaky, the leader of the Islamic Movement in Nigeria, according to the same Channels TV report.

Channels TV said that Owolabi was working at the station as part of Nigeria’s National Youth Service Corps, a one-year work assignment carried out by all graduates before the age of 30.

“A swift and credible investigation into the shooting that killed Precious Owolabi is critical for journalists in Nigeria to believe the government is committed to their safety,” said CPJ Africa Program Coordinator Angela Quintal.

“Journalists should never be targeted during the course of their work, and when members of the press are harmed, those responsible must be held accountable”, she added.

CPJ said it was unable to determine which side fired the shot that injured Owolabi.

Precious Owolabi was working as a reporter as part of his National Youth Service Corp assignment.

Tavershima Adongo, a medical and health consultant with the Premium Times Centre for Investigative Journalism, told CPJ that he watched the confrontation from the window of a ministry of health building. “[Owolabi] I think he still wanted to record the event, so he moved closer to the crowds and they shot him,” Adongo said, adding that he “couldn’t tell exactly which side” the bullet came from because his view of the journalist at that moment was obstructed by a parked car.

Adongo said the shot that hit Owolabi came after police fired tear gas and some protesters had advanced toward the police. “[Owolabi] was in between [the protesters and police]. He didn’t leave his position. Maybe he thought perhaps he was not going to be harmed…the police took him away [after he was hit],” Adongo said.

A journalist who was at the scene, but requested anonymity for fear of reprisal, told CPJ he saw police fire their guns and that he did not see protesters with firearms.

Police spokesperson Frank Mba told CPJ via phone that as well as Owolabi, deputy police commissioner Usman Umar was shot and died from his injuries. Mba said, “The first hypothesis is that these guys were all shot by the protesters and the deputy commissioner of police was shot point blank, at close range, by the protesters.”

When asked if the police had fired shots during the confrontation, Mba said, “When the rioters started shooting at the policemen, the policemen they needed to fire shots into the air to let [the protesters] know that [the police] equally have weapons. They fired warning shots. When we handle protesters in this country we are guided by the principle of proportionality of force and we will always adhere to our rules of engagement and international best practices.”

Adullahi Muhammed, the Islamic Movement in Nigeria’s secretary to the academic forum, told CPJ that he was at the front of the protest and did not see any protesters with firearms. He added that some threw rocks at police after police began shooting.

John Momoh, the chairman of Channels TV’s parent company, Channels Media Group, has asked police to open an investigation into Owolabi’s killing, according to a report on the Channels TV website.

Suleiman Aliyu, another member of Nigeria’s National Youth Service Corps and a reporter with the daily Leadership A Yau, the Hausa language service of the Leadership newspaper, was also shot and injured at the protest, but he was not reporting at the time, according to the Leadership.

Nigerian President Muhammadu Buhari tweeted condolences to the families of Owolabi and Umar.