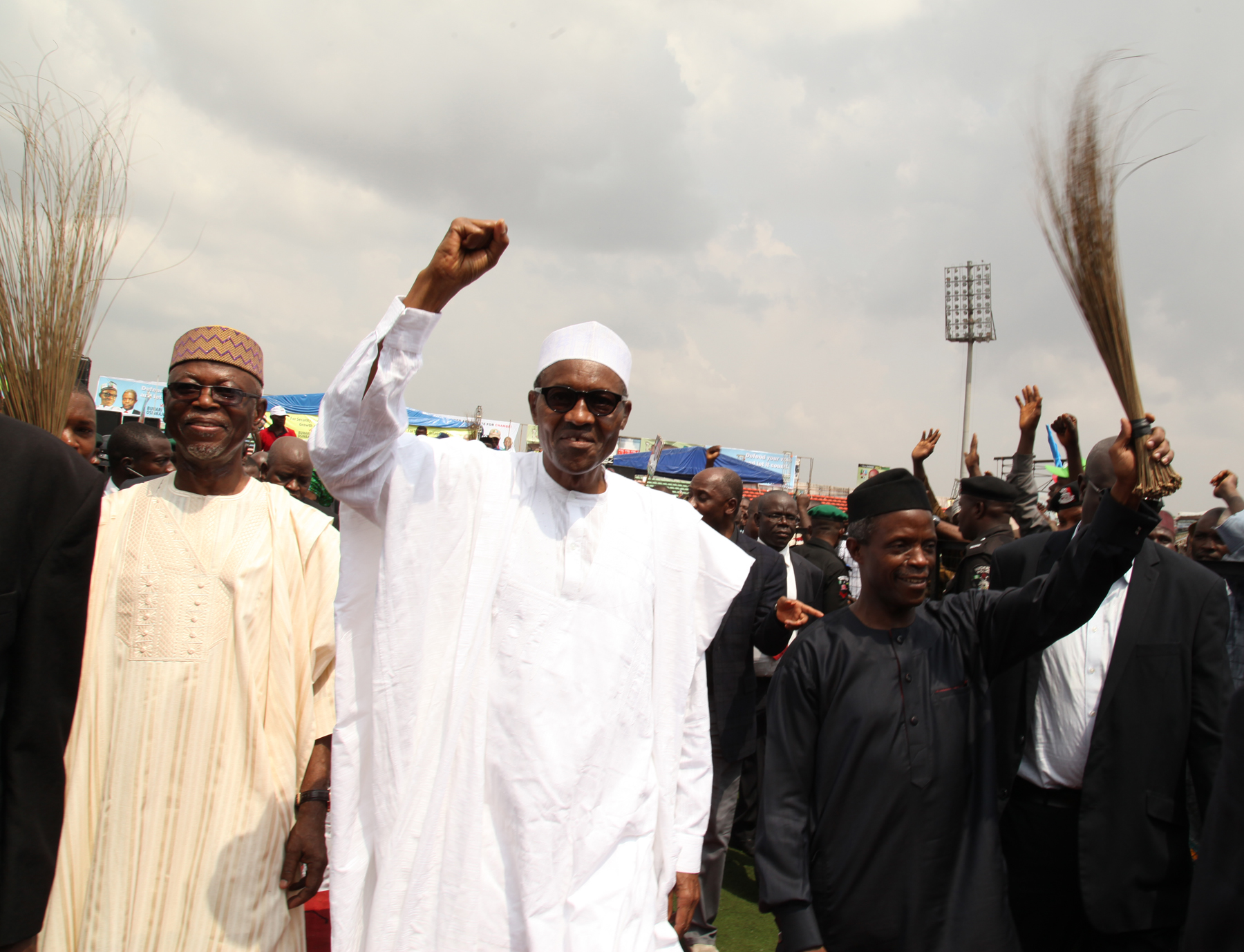 President Muhammadu Buhari has defined the creation of a new cabinet as “a milestone” on 11 November. 36 ministers were sworn in during an official ceremony at the presidential villa in Abuja.

The ministers were nominated by Buhari in October, nearly six months after he took office. Buhari, who appointed himself as the country’s oil minister said he wanted to make sure the nominated people would not misuse the country’s resources as, he alleged, billions of dollars worth of funds had been stolen during previous administrations.

“Your Excellency, The Vice President; Professor Yemi Osinbajo; The Senate President, and the Hon. Speaker, House of Representatives; The Chief Justice of Nigeria, Rt. Hon. Justice Mahmoud Mohammed; The National Chairman, All Progressive Congress, Chief John Oyegun; National Leader of APC, Chief Bisi Akande; Other APC Executive Committee Members here present; The Secretary to the Government of the Federation; Head of the Civil Service of the Federation; Honourable Ministers; Members of the Diplomatic Corps; Members of the Press and Invited Guests.

“Today we have reached another milestone in the evolution of our new government which Nigerians overwhelmingly voted into office in the March 28th, 2015 general elections. Today we witness the swearing-in of new ministers of the government of the Federal Republic of Nigeria.

“Since our inauguration on May 29, 2015, the Vice President and I have been mindful of the need to constitute a cabinet that will best deliver our expectations of a better country than we inherited. We want to work towards a prosperous nation respected for the right reasons, and whose citizens can hold up their heads anywhere in the world. And we are optimistic that bringing this set of ministers into the service of our country today is a step in the right direction, a timely move towards realizing our positive goals for our country.

“Since we assumed office in May, I have been mindful of the need to ensure that the appointment of new ministers translates into putting round pegs in round holes while showing sensitivity to our diversity as a people and our various positions as groups of stakeholders in our country.

“I have also been conscious of the need not to repeat such mistakes of the past where the right people were allocated the wrong portfolios, which translated into their performing poorly to our collective detriment despite their obvious capabilities. Also, I have responded to the counsel to consult as widely as possible, given the need to build a stable and all-inclusive government by reaching across our various ethnic and political divides.

“With the inauguration of ministers, our government shall continue more decisively to implement its policies in respect of the economy and in other areas. While working hard to maximise revenue from oil in the face of a sharp decline in the price for the commodity, we are determined to diversify the economy in agriculture to enhance employment and explore solid minerals as a major revenue earner.

“The primary aim is to achieve self-sufficiency in the production of such staples as rice and wheat and to become a major consumer and exporter of both items as well as solid minerals. We intend to pursue policies that will generate massive employment for millions of our youth.

“We shall also continue with greater determination and focus to pursue our goal of ensuring improved security for our country and its citizens, and without letting up on our fight against corruption. Our commitment to defeat Boko Haram and all the threats it constitutes remains as strong as ever. So is our resolve to root out vices such as kidnapping and neutralise the various forms of criminalities that threaten the social peace of Nigerians.

“While recognizing the challenges we face and the need to surmount them, let us not fail to note the progress we have made in the short life of this government, as an indication of how much better we can do as a people driven by patriotism and a common resolve to do things right.

“On the moral sphere, trust is slowly but steadily being re-established between the government and the people. Now, when the government speaks, the people listen; and when the people’s expectations are not met, they appreciate that it is not for lack of commitment or trying on the part of government. In effect, government business is now being conducted with transparency and cynicism is waning as a result.

“Our adoption of the Treasury Single Account has resulted in the blocking of financial leakages in the public sector, making more funds available for the business of governance and ensuring the welfare of our citizens. The Central Bank of Nigeria has also assisted more than 30 States of the

“Finally, our new ministers must proceed to work speedily and do their utmost to justify the confidence we have placed in them not only by their conduct but also by their performance in their various positions.

“Over all our economy is poised for sustained job creation, poverty reduction and inclusive growth. Regardless of the present challenges we are confronting, I believe all Nigerians will keep hope alive and sustain their optimism about the future of our economic well being.