A yet-to-be-identified male adult has been killed in a clash between Yoruba Nation agitators and the police in the Ojota area of Lagos State on Monday, Channels Television reports.

The spokesperson for the police in Lagos, Benjamin Hundeyin confirmed the death of the unidentified person. He said operatives of the Command had been deployed to the scene.

Commuters ran to safety in the heat of the pandemonium which broke out on Monday morning.

A source disclosed that some agitators came out to demand Yoruba Nation amongst others and the police came out to curtail them, leading to a clash.

A confirmed police source hinted that shortly after the agitators took to the streets, the men of the Lagos State Police Command came out in procession with a detachment of personnel from Rapid Response Squad, State Taskforce and conventional divisional officers.

Security operatives arrived the scene and shot teargas to disperse the crowd.

A police van was reportedly burnt in the ensuing outrage.

Over 200 agitators reportedly came out on Monday but the police arrested four of them.

The agitators were alleged to have shot pump action guns which hit a police office, Superintendent of Police, Akinwunmi Oke.

Oke, the Operation Officer attached to the state Rapid Response Squad, is an anti-riot officer known for restoring peace at any assigned area. 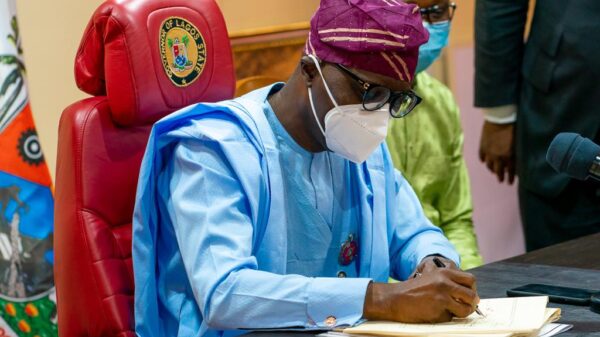