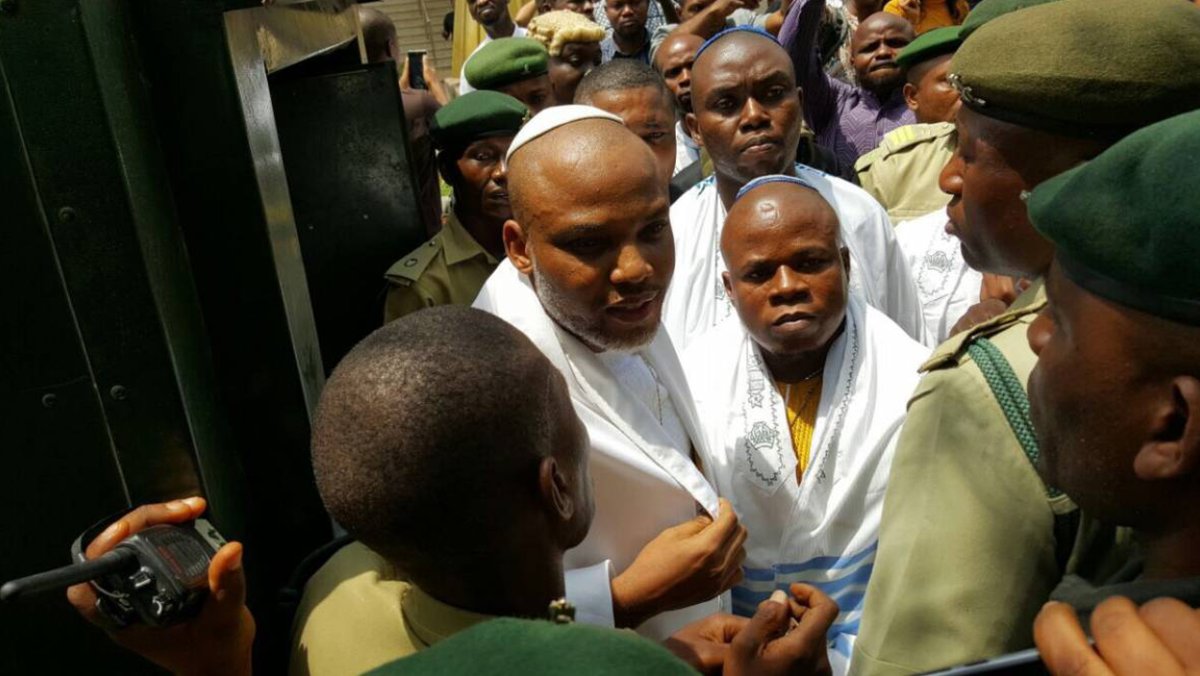 Eminent Nigerians in various organisations yesterday expressed concern over the alleged attack by the Nigerian army on the residence of the leader of the Indigenous People of Biafra (IPOB), Mr. Nnamdi Kanu.

The organisations, including The Patriots, Yoruba Council of Elders (YCE), National Summit Group (NSG) and Ijaw Youths Council (IYC) urged the Federal Government to investigate the attack in the interest of peace, unity and the future of the country.

While they refrained from taking a specific position on the matter, based on the fact that the military authority has since denied the allegation, the leaders, however, warned that this is not the best of time for the Federal Government to deploy force in resolving the delicate issues at hand.

IPOB on Sunday accused the army of ambushing the residence of Kanu, claiming that the uniformed men had tried to forcibly enter Kanu’s premises but failed and so began firing shots at unarmed IPOB members around the area.

The group claimed that three civilians were killed in the process while about 20 others were severely injured. Kanu himself alleged that the soldiers stormed his residence and injured several occupants in an attempt to kill him.

But the army has dismissed the allegation, claiming that IPOB members attacked their armoured personnel carrier as it was driven by the residence of Kanu. The military authority denied any attack on the premises of the IPOB leader.

Reacting to the development, the Chairman of The Patriots, Prof. Ben Nwabueze, said the situation in the country called for great restraint on the part of all. He urged the Federal Government to take firm steps to restrain any actions capable of escalating the crisis, such as the reported attack on Kanu’s home in Umuahia.

“The report of the attack by soldiers of the Nigerian army during which some people were reportedly killed or injured is a matter of grave concern, because it occurred at a time the country is facing destabilising crises and threats to its peaceful co-existence,” he said.

The President General of YCE, Chief Idowu Sofola, said if the action of the military as reported was true, it was totally wrong and condemnable.Hinging his position on the fact that the military’s primary duty is to defend the nation against external aggression, Sofola said “since the military authority has denied such, my advice to President Muhammadu Buhari is to quickly set up a body to investigate the matter and come out with the fact.”

Sofola warned that the situation in the country was delicate and it would not go in the interest of anybody, group or region or the country as a whole to allow it escalate.

One of the leaders of the Yoruba socio-cultural organisation, Afenifere, Chief Ayo Adebanjo, described the reported attack on Kanu’s residence as provocative and unacceptable. He alleged that the Federal Government was looking for an excuse to declare a state of emergency in the Southeastern zone all because the leader of IPOB is calling for restructuring.

According to Adebanjo, “President Buhari has never changed his dictatorship attitude, against which I warned Nigerians and those who supported him to get into office during the 2015 general election. He has been paying lip service to the unity of this country. Painfully, Mr. President has deliberately rejected all the proposals we gave to him on how to resolve the challenges facing us as a nation.”

Adebanjo added that the attack on Kanu’s residence did not come as a surprise to him. “The truth must be told that the president did not want to rule but to dominate and enforce the Fulani hegemony on other regions of the country. He has surrounded the country with the military and that was the implications of what happened to Kanu on Sunday.”

According to him, Buhari has tactically deployed northerners to hold all the key military positions across the country in case of any aggression, and where he did not do that, there are Fulani herdsmen everywhere with sophisticated weapons to resist any opposition.

“Buhari has justified my skepticism and warning about him. For instance, he has also distanced himself from those southerners that helped him into power and further denied the restructuring he promised to do before he got into office,” he said.

The Secretary-General of NSG, Mr. Tony Uranta, also condemned the military action, saying at no time did Kanu degenerate to carrying arms and ammunition against the country like the Hausa Fulani herdsmen have done several times across the country.

To Uranta, the military should rather deploy its strength to addressing the menace of the herdsmen who are with sophisticated arms and ammunition instead of attacking harmless Kanu.

The President of IYC, Eric Omare, said the deployment of the military troops in the Niger Delta and Southeast region would not solve the rising agitations.In a statement, Omare said that the picture of those killed and injured told a very sad story about the engagement of the military with the IPOB members.