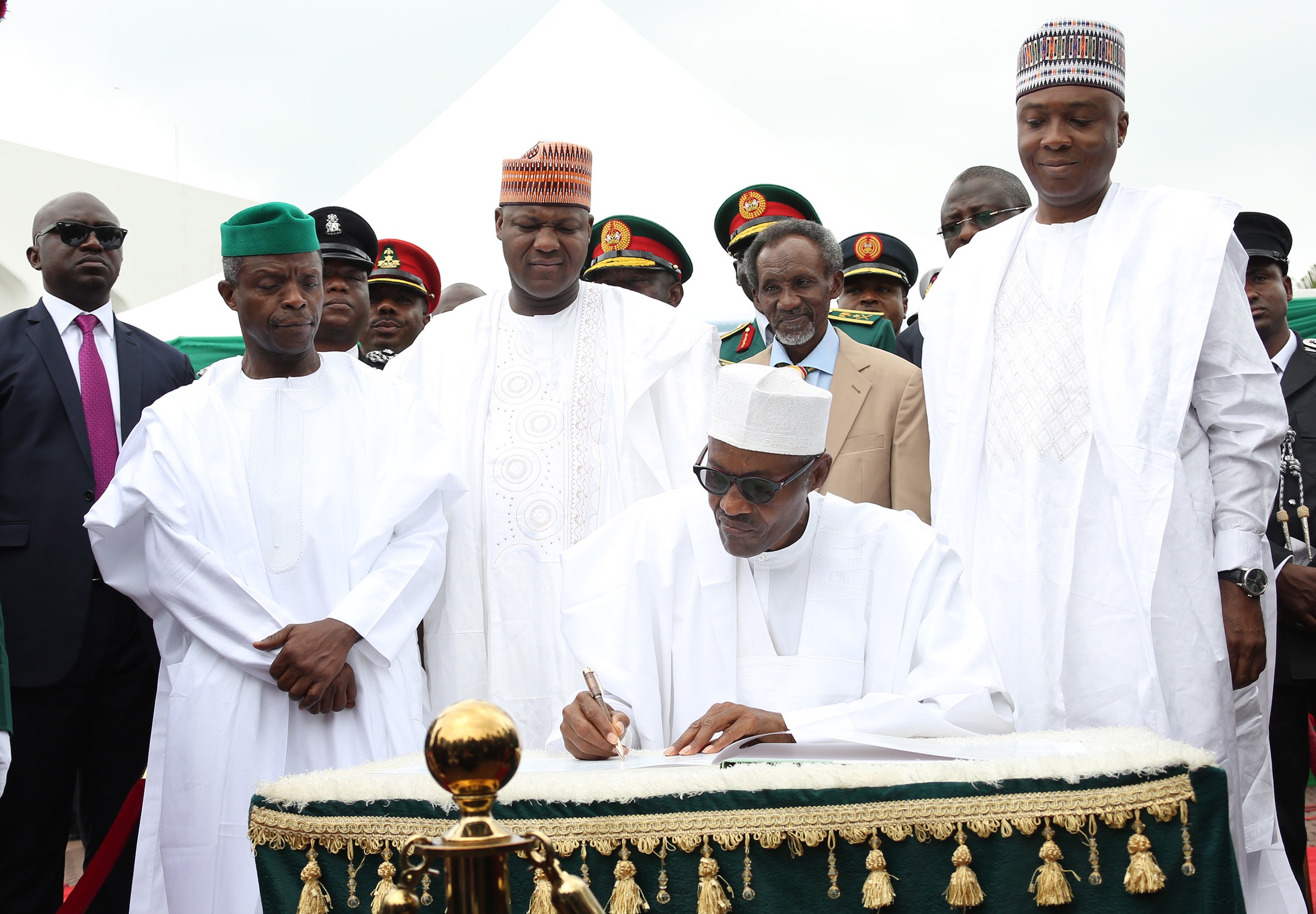 Things have not been going according to plan for President Buhari. For the last four months since his famous victory, the president has been engaged in a battle royal with the very people who put him in power. In order to win the last presidential election, Buhari had to form an alliance with wily politicians of the old-school; men seasoned at getting their hands dirty and adept at manipulating the system to power and political advantage.

Buhari had tried to make it without these men in the past, but without success. On his third attempt in 2011, he opted for Tunde Bakare as his running mate. Bakare is not a politician but a man of known integrity: a radical Christian pastor to boot. Nevertheless, Buhari still lost by 10 million votes to the lesser-known Goodluck Jonathan.

In 2015, he chose Yemi Osinbajo as his running-mate, another man of integrity and, yet again, a Christian pastor. But there was something different this time around. He agreed to dine with known political devils. He formed an alliance with the very political elite he had long despised. These are men who know the crooked ropes of the Nigerian political system. They know how to finance a nationwide campaign with funds obtained magically; no questions asked. They know how to buy and manipulate the press. They know how to conjure votes with the sleight of hand.

Buhari has kept Nigeria waiting as he struggled with this dilemma. While the press nicknamed him “Baba Go-Slow,” behind the scenes, he was fighting an epic battle against his strange allies the best way he knew how. In that free-for-all, Buhari has thrown his best punches and made his best moves. Finally, after four months of protracted infighting in which his media handlers tried all they could to put the best spin on the situation, he finally caved in and accepted defeat.

On September 30th, 2015, Buhari was forced to accept he could not go it alone. On that day, he finally decided to join the APC politically as its president. Even more significantly, he finally agreed to join forces as president with those he had despised all his political life – the PDP. On that fateful day, President Muhammadu Buhari jettisoned his earlier druthers. He relinquished his much-ballyhooed “change” programme and became reluctantly a full-fledged old-school politician.

Buhari’s first mistake was to presume his campaign idealism could carry him through his presidency. Having won the election comfortably, the president decided the decent thing to do was to allow the legislators in the National Assembly to choose their own leaders without interference from Aso Rock. This was a departure from the procedure of his predecessors and his naïve supporters praised him for it. This was the Buhari they voted for; a man who would breathe new life into the clogged political system. But the whole thing backfired disastrously as the president became a victim of his own attempted saintliness.

What the system required was a president determined to ensure the right people are in leadership positions in the National Assembly to ensure his programmes are implemented expeditiously and to the letter. What we got instead was a president so idealistic, he allowed his opponents to turn the tables on him. Buhari’s hands-off vis-à-vis the National Assembly ensured that he ended up with a House and Senate leadership well-positioned to frustrate his programmes. In spite of APC victory at the polls, the PDP used the backdoor to steal the control of the legislature; using a template perfected, while the APC was still in opposition, by Aminu Tambuwal.

Both the Speaker and the Senate President were elected by minority PDP votes against majority APC votes. Moreover, both the Speaker, Yakubu Dogara, and the Senate President, Bukola Saraki, are former PDP men. Both of them secured their positions by forging alliances with their former PDP colleagues; instead of their current APC party-members. As a result, while Buhari was still celebrating his victory at the presidency, he woke up one morning to discover the PDP had regained the legislature by a coup d’état.

It could even have been worse. The PDP could have gone the whole hog and secured a PDP man as Senate President. With 49 senators out of 109, all the PDP needed were 6 more votes to achieve this. This could have been squeezed out with a few back-room deals with the Trojan Horse PDP senators currently sitting pretty as turncoat APC members. But they decided not to be too greedy. They installed wily Saraki, a former PDP man, as Senate president. They then made the deals and secured their own PDP man, Ike Ekweremadu, as Deputy Senate President.

This was a wake-up call for the president. Finally, he learnt that his idealism just would not cut it in the murky waters of Nigerian politics. He cannot stand aloof but has to dive in and get dirty himself. Accordingly, recalcitrant Saraki was declared persona non grata in Aso Rock; but this could only work for so long given that he is the Senate President. His wife was invited for lunch by the EFCC; but a battalion of senators showed their defiance by escorting her there. Thereafter, the dogs of the Code of Conduct Bureau were unleashed on Bukola Saraki himself.

On his election, Buhari had served notice that he would be his own man and not anybody’s dogsbody. He declared: “I belong to everybody and I belong to nobody.” This must have irritated those who put him in power to no end. He then went ahead to declare his political independence by telling APC governors they would have no say in his choice of ministers. He also refused to consult his party hierarchy in his early appointments and with regard to his choice of presidential aides.

With this, all hell broke loose. The same press that had been used to his advantage during the election was unleashed against him. The Teflon president was now presented as a sectional ethnic leader determined to northernise the country through regionally-lopsided appointments. The APC party hierarchy declared it would have none of this. Party chairman, John Odigie-Oyegun, declared: “The party will henceforth be fully involved in the subsequent appointments, which is where the supremacy of the party will come to bear.”

Thereby, the battle was joined. Would the “noise-makers” in the APC prevail against the president and force him to use his ministerial appointments to pay back his political debts to those who successfully manipulated the process to get him finally elected after three failed previous attempts? Or would Buhari, now that he is elected, go it alone and bring in his own team of carefully selected technocratic saints and angels?

If he succumbed to the party, he would end up with the same old crop of yesterday’s politicians, many tainted with corruption, but would safeguard his political flanks. However, if he prevailed with his own men, he could present a new face of Nigerian politics by asserting the primacy of technocratic savoir faire over political compensations and “come and chop.” The one would confirm him as the new hero of the Nigerian public. The other would make him a traitor to his questionable political allies.

The outcome of this struggle was announced with his ministerial list. This revealed that Buhari surrendered after being roundly defeated by the old politicos of his party. The president has been forced to contradict his own promises and rhetoric by succumbing to APC pressure. From now on, what we are going to get is no longer Buhari the idealist, but Buhari the new-fangled politician.

It is clear from the announced names of Buhari’s proposed ministers that these are not the people he took four months to select. Buhari does not need four months to come up with the likes of Babatunde Fashola, Rotimi Amaechi, Lai Mohammed, Ogbonaya Onu, Kayode Fayemi and Chris Ngige. These are old-time politicians whose names could have been announced 24 hours after his inauguration. None more so than Audu Ogbeh, a man who was a minister 33 years ago and is recycled by Buhari yet again.

Significantly, out of the 21 nominated names, eight of them were formerly associated with the “abominable” PDP. Indeed, Audu Ogbeh is a former chairman of the PDP. There are actually more former PDP men in Buhari’s ministerial list than there are former ACN, CCP and technocratic men and women. So much for Buhari’s much-touted “change” from the PDP.

Whatever could be said about these nominees, they are hardly the men and women of stainless-steel that Nigerians have been led to expect as Buhari’s ministers. As a matter of fact, many of them have huge corruption allegations hanging over their heads. Two of them are associated with Afri-projects Consultants, an organisation tainted with corruption while Buhari was chairman of the PTF.

Clearly, these were not the men and women Buhari wanted to have as his ministers initially. They are those he was forced to accept after four months of struggle with party chieftains. Even now, the struggle continues. Not surprisingly, Buhari prematurely badmouthed his nominees as “noise-makers” on his trip to Paris, inadvertently showing his disenchantment with having to make do with those he would rather do without. Nevertheless, the president’s reluctant nominees can still be waylaid by his opponents in the Senate, including the acolytes of Bola Tinubu whose preferences Buhari flagrantly ignored.

The president’s answer is a resort to old-fashioned political maneuvering, in the tradition of the infamous APC “navigator,” Olusegun Obasanjo. Put the fear of Buhari into Senate President Bukola Saraki by arraigning him before the CCB tribunal on outdated charges paradoxically similar to the ones Tinubu was acquitted of several years ago. If Saraki knows what is good for him, he will quickly ensure that the president’s list sails through the Senate without any hiccups.

The jury is still out on whether Saraki and his Senate colleagues will succumb to this now famous “body language” of Mr. President