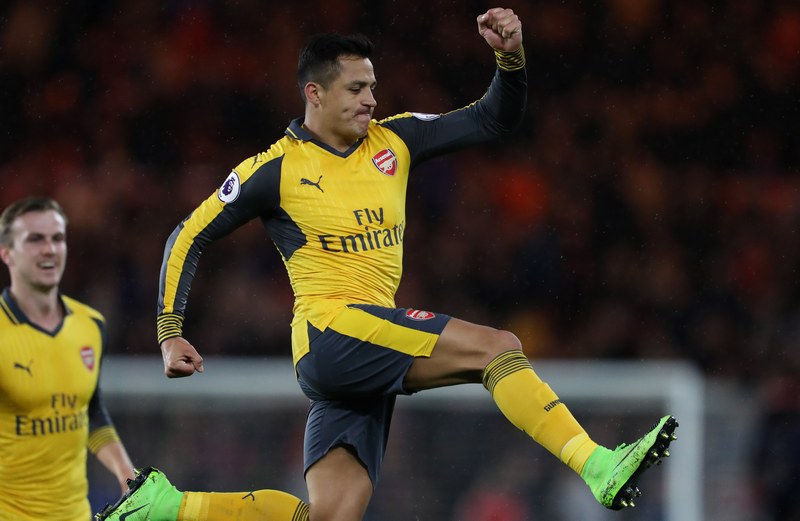 Arsenal have moved back up to sixth in the Premier League table courtesy of a hard-fought 2-1 victory over struggling Middlesbrough at the Riverside Stadium this evening.

Alexis Sanchez gave the Gunners a lead with a rare piece of quality in an otherwise uneventful first half, but that was cancelled out by Alvaro Negredo early in the second half.

Anything other than a win would have been another major blow to Arsenal’s top-four hopes, but Mesut Ozil ensured that they closed the gap to the Champions League places back to seven points with the winner 19 minutes from time.

Both managers made wholesale changes to their teams in an attempt to improve their dreadful form having seen their respective goals of survival and Champions League football slip away in recent weeks.

Boro – without a league win since December 17 – brought in the likes of Negredo, Gaston Ramirez and Fabio amongst their five changes, but it was Arsene Wenger’s decision to switch to three at the back for the first time in 20 years that raised the most eyebrows.

Rob Holding was amongst those to come in, while Petr Cech and Laurent Koscielny also returned as the Gunners brought in no fewer than six new faces to their starting XI having lost four away league games in a row for the first time under Wenger.

Perhaps unsurprisingly for two teams in such poor form it was a tense and cagey contest for the most part, with a 35-yard effort from Grant Leadbitter that flew comfortably wide the most notable attacking moment of the opening 20 minutes.

Boro did have the ball in the back of the net midway through the first half when Ramirez hoisted a delivery into the middle for Marten de Roon to nod home, but he did so from an offside position and the celebrations were immediately cut short by the linesman’s flag.

Arsenal’s first sight of goal arrived shortly before the half-hour mark, but Aaron Ramsey and Sanchez both failed to make the most of difficult volleyed chances inside the Boro area within a minute of each other.

It was the Chilean who produced the sole piece of real quality in the first half to send Arsenal into the break ahead, though, firing a free kick past a statuesque Brad Guzan from 25 yards for his 19th league goal of the season.

Boro’s status as the lowest scorers in the top four tiers of English football made it difficult to see them getting back into the match, but it took just five minutes for them to find an equaliser after the restart as Arsenal once again failed to keep a clean sheet on the road.

Stewart Downing was the creator, cutting inside before clipping a fine ball into the middle that Negredo was able to poke home with the base of his foot having snuck in between the two Arsenal defenders.

The Gunners, who collapsed in the second half on their way to a 3-0 defeat at Crystal Palace a week ago, looked shaky again in the immediate aftermath of that goal and Downing failed to capitalise on some shoddy defending when he blazed the ball a long way over the crossbar from inside the area.

That sparked an open period of the match during which time Guzan thwarted Ozil after the German had got a toe to the ball having been found by Sanchez’s incisive pass.

Ozil would have better luck when he restored Arsenal’s lead 19 minutes from time though, with Sanchez and Ramsey combining to lay the ball into the path of the midfielder to fire home from close range.

Boro boss Steve Agnew threw Rudy Gestede into the mix as he looked to get his side back into the match, and the big striker almost made an immediate impact when he teed up Negredo on the edge of the box, only for the Spaniard to see his effort saved by Cech.

Arsenal could have killed the game off with nine minutes remaining when Giroud blazed well wide from the edge of the box, but the hosts were soon back on the attack and Ayala and Ben Gibson both failed to make the most of half-chances as Boro bombarded the area with high balls.

The home side were given four minutes of added time to come up with a response, but it was Arsenal who looked most like scoring in that time and Alex Oxlade-Chamberlain came close twice before Olivier Giroud sent an audacious lofted effort just past the post.

A one-goal lead proved to be enough for the visitors as they won on the road for the first time in more than three months, though, lifting them back above Everton and into the top six ahead of next weekend’s FA Cup semi-final with Manchester City.

Boro, on the other hand, remain in a perilous position with just six games of the season to go, three of which will come against teams currently in the top four.