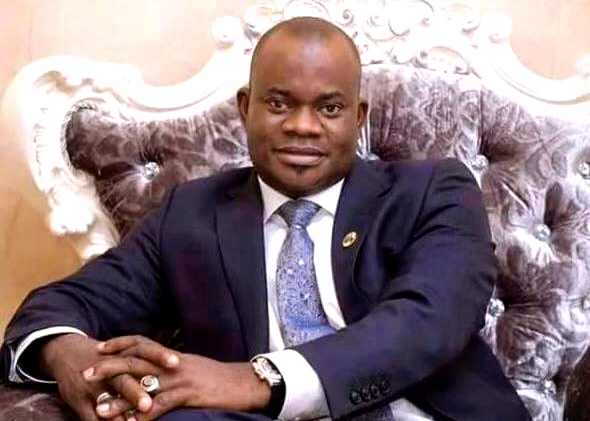 The drama of who replaces the late Abubakar Audu as the governorship candidate of the All Progressives Congress, APC, in Kogi state has entered a new dimension as reports indicate that the party has named Yahaya Bello.

The National Chairman of APC, Chief John Odigie-Oyegun, who was in Kogi allegedly announced the decision of the party to pick Bello who came second in the primary.

James Faleke who was running mate of late Audu will keep his place as deputy to Bello.

Reacting to the choice of Bello, Dr Tom Ohikere, Head of media, Abubakar Audu/James Faleke Campaign Organisation, described the decision to replace the late Audu with Bello, who came second in the primary as “illegal and moral burden” on Oyegun and other members of the national working committee.

Audu’s followers at a press conference in the Kogi State capital, Lokoja, yesterday said he specifically told them to support his running mate, James Faleke, if he failed to make it. Head of Media, Prince Abubakar Audu/Faleke Campaign Organisation, Dr. Tom Ohikere, said Audu issued the instruction on his death bed. He said Audu believed that Faleke was best suited to carry on with his vision and warned against any attempt to impose a candidate on the state chapter.

Ohikere also accused President Muhammadu Buhari and INEC of planning to foist a Muslim candidate (Bello) on the state chapter. He also alleged that some powerful forces prevailed on INEC to declare the election inconclusive after they learnt of Audu’s death on Sunday morning.

According to Ohikere, the presidency and APC leadership cannot claim to be unaware of the provisions of the law, whereby a running mate to a deceased candidate in an ongoing election steps in as the party’s flag bearer.

“But it has been a grand conspiracy between the party leadership and the Presidency to ensure that a Muslim is used as a replacement to late Prince Abubakar Audu, who died on November 22.

The state will not only catch fire, but the late Prince Audu will rise from the grave and unleash terror on anyone involved in this conspiracy. “Let me open up to you now. Our political mentor and father, late Prince Audu on his death bed, gave instructions to us (his followers), that should he not make it, the baton must be transferred to his running mate, Faleke, whom he (Audu), said is capable of carrying on with his vision. “I want to categorically tell you that the party/executive’s conspiracy started when they heard that Prince Audu was dead.

In an ulterior move to stop a non-Muslim (Faleke), from stepping in, the INEC returning officer was quickly directed to declare the result inconclusive,” he stated. Audu’s camp also disagreed with the Attorney- General of the Federation and Minister of Justice, Abubakar Malami, on his position in respect of the crisis. The AGF had at a conference in Abuja advised APC to present a fresh candidate to pick up the mantle.

He also said the camp had studied the various opinions canvassed by lawyers on the matter. He, however, said Audu’s camp would not accept a situation where APC chieftains would prefer to back Wada to get a second term instead of backing Faleke to step into Audu’s shoes. Ohikere, who stressed that the AGF’s observation was a ‘pure script reading,’ said, “I don’t agree with the AGF on his position regarding the nomination of another candidate by the APC. I however agree that a supplementary election can be proceeded with by INEC.”

“I’m amazed by the welter of opinion canvassed by several leading legal icons on this seemingly thorny issue. Some have called for a fresh election, others have argued otherwise while some have posited that the victory of APC should be, wholesale, donated to PDP’s Capt Wada. “Surprisingly, all these arguments seem to have overlooked the provisions of section 187 (1) of the constitution of the Federal Republic of Nigeria, 1999 as amended.

In another twist, Faleke who had earlier written to the Party Chairman also fired another letter following the reports that Bello had been given the nod by the party.

The four page letter written by his counsel, Chief Wole Olanipekun and entitled RE: JUST CONCLUDED GOVERNORSHIP ELECTION IN KOGI STATE – APC SHOULD NOT SIDETRACK JAMES ABIODUN FALEKE OR SUPER IMPOSE ON HIM ANY OTHER PERSON OR CANDIDATE, said:

“While reiterating and adopting the position of our client as highlighted, expressed and conveyed in our first letter, permit us, most humbly, but frankly to add the following points on behalf  and instruction of our client, that is to say:

(i) The Issue involved is that of constitutional, formal and legal imperatives, rather than political expediency. In the eyes of the Constitution and the law, our client is the governor-elect of Kogi State. There is no gainsaying this fact. It is a truism that cannot be discounted.

(ii) It is the duty of the APC to champion the actualization of its mandate, as well as that of our client. In this wise, we most humbly advise  and caution that the party should be minded of the Ides of November, because  the idea being sold to the APC by the INEC to go and hold a supplementary primary election for the purpose  of bringing forth a governorship  candidate to contest a supplementary  election in 91 polling units is saturated with deleterious legal and constitutional landmines. We posit without any hesitation that at this stage, INEC and all the political parties that took part in the concluded election have reached a point of no return. Thus our client can neither be jettisoned by the APC, nor can a new or fresh candidate be imposed on him as his Principal. The law also does not  recognize  this type of supplementary  election in 91 polling units, with total number  of eligible voters with PVCs not more than 25,000 or thereabout. Otherwise, if the law and Constitution allow it, Kogi State would end up holding a supplementary election, which would also produce a supplementary governor. Put bluntly, there cannot be any legitimate Governor of Kogi State who would emerge from the supplementary election (outside our client) with a maximum of 25,000 votes, assuming all the registered voters with PVCs cast their votes for the anticipatory supplementary governor will also be likened to a Governor of 91 polling units. May we quickly draw your attention to Section 179 (2) (b) of the 1999 Constitution which states:

“(2) A candidate of an election to the office of Governor of a state shall be deemed to have been duly elected where, there being two or more candidates-

(b) He has not less than one-quarter of all the votes cast in each of at least two-thirds of all the local government areas in the state.”

He recalled how the PDP , in 1999, “called off the bluff of INEC when it ordered a re-run in Adamawa State to elect a fresh or new Governor in place of the then Governor-elect, Alhaji Atiku Abubakar who had already transmuted  to be Vice President elect.”

Continuing, he said: “It was the contention of PDP that the then Deputy Governor-elect, Boni Haruna automatically became and assumed the position of governor-elect. The PDP took the matter to court and, at the end of the legal pilgrimage, the Supreme Court agreed with the PDP. Then the Deputy Governor-elect, Boni Haruna, not only assumed position as Governor, but spent two terms in office. With very high respect, we do not expect the APC to do less.

“When the late Umaru Yar’Adua was terminally sick, some leading members of your party in coalition with some decent forces in the country, bandying the ‘doctrine of necessity’ championed the cause of the then Vice President, Goodluck Jonathan to be appointed President. At the end of it all, the National Assembly acceded to this clarion call and Vice President Goodluck Jonathan metamorphosed to acting President. Thereafter, he became substantive President for six years. The point being made by us is that if we could rely on the doctrine of necessity and maximally utilize same to make Vice President Goodluck Jonathan, the sitting President, it then goes without saying that both INEC and the APC must submit themselves to the doctrine of constitutional imperative and/or necessity to allow our client to be Governor – elect of Kogi State.

Faleke said he is not “ready or prepared to trade off or compromise his mandate as the Governor-elect of Kogi State” and does “not want to believe that he is being discriminated against for whatever reason”.

The whole Palaver began on November 21 with the death of  Prince Abubakar Audu, who was waiting to be declared the winner of the governorship election, but was instead declared dead.

Audu, from the results declared by the INEC, from the 21 local councils in the state, had won 16 and was clearly ahead of the PDP opponent and incumbent, Idris Wada.

But INEC declared the election inconclusive, despite projections by the media that he had won. A lesson to the media not to project election results again.

According to results declared by the Returning Officer, Emmanuel Kucha (Vice-Chancellor of the University of Agriculture, Makurdi), Audu scored 240,867 while Idris Wada of the Peoples Democratic Party garnered 199,514 votes.

Mr. Kucha said the margin of votes between Messrs Audu and Wada is 41,353.

And he declared that the election was inconclusive because the total number of registered voters in 91 polling units, in 18 local government areas where election was cancelled is 49,953.

It seemed the party has ignored Faleke for reasons best known to it and chosen Bello not minding the legal minefield it is walking into at the moment.