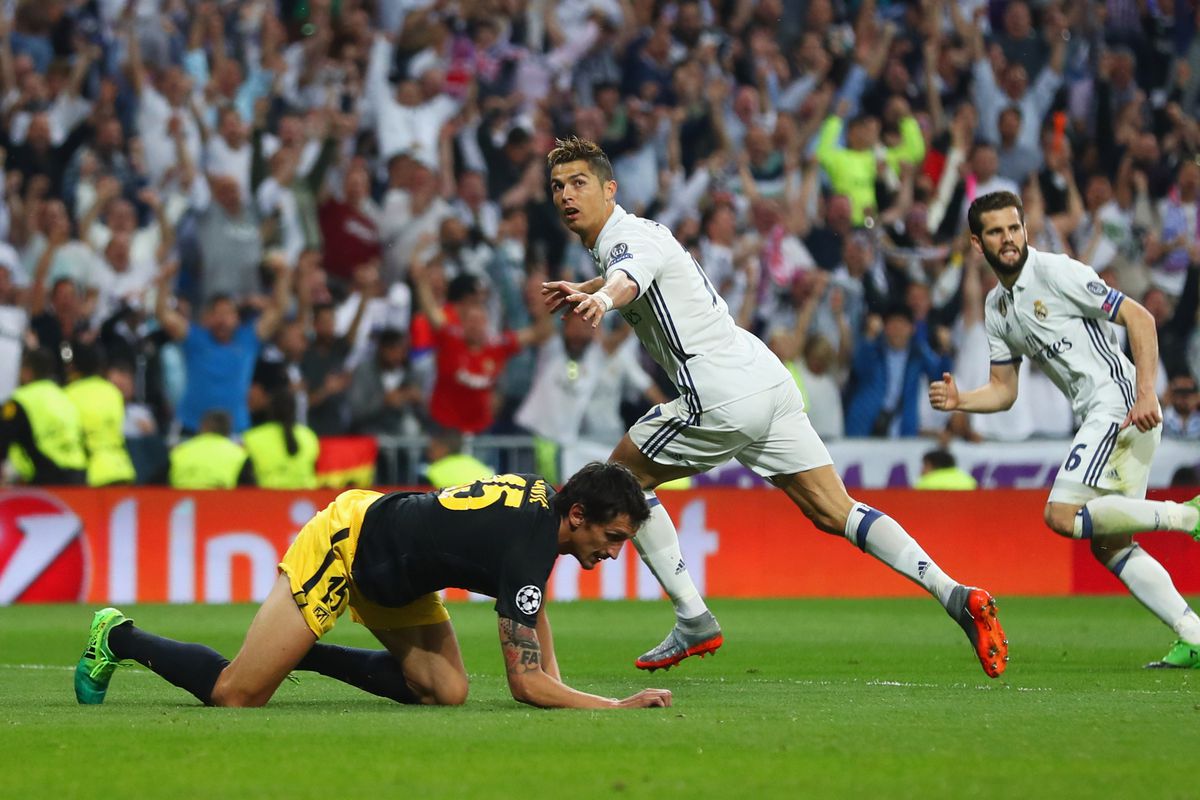 Cristiano Ronaldo scored another hat-trick as Real Madrid recorded a 3-0 win over Atletico Madrid in the first leg of their Champions League semi-final at the Bernabeu on Tuesday night.

The famous number seven headed the home side ahead in the 10th minute of the contest, before netting twice in the second period to ensure that reigning European champions Real Madrid would take a three-goal advantage into next week’s second leg at the Vicente Calderon.

Raphael Varane was passed fit for Real Madrid following a hamstring injury, while Isco was the player selected alongside Ronaldo and Karim Benzema in the final third, with Gareth Bale on the sidelines with a calf problem.

As for Atletico, injuries to Juanfran, Jose Gimenez and Sime Vrsaljko meant that there was a spot at right-back for Lucas Hernandez, while Yannick Ferreira Carrasco returned from a shoulder problem to start alongside Antoine Griezmann and Kevin Gameiro in a three-pronged attack.

It was Ronaldo that had the game’s first attempt of any sort in the fourth minute of action, but the number seven’s effort was always moving wide of Jan Oblak’s post.

Real Madrid had a super chance to make the breakthrough in the seventh minute when Oblak palmed a Dani Carvajal effort straight into the path of Benzema inside the Atletico box, but the Frenchman simply could not convert under pressure.

The home team were ahead three minutes later, however, when Ronaldo rose highest inside the Atletico box to head a Casemiro cross into the back of the net for his 101st goal in the Champions League.

Zinedine Zidane’s side came close to scoring a second in the 16th minute when Varane headed a Toni Kroos corner towards goal, but Oblak made a smart save, before Keylor Navas denied Gameiro down the other end after the Atletico forward had broken into the Real Madrid penalty box.

Luka Modric was next to come close for Real Madrid in the 24th minute after working some space in a dangerous position, but the Croatian’s low effort just missed Oblak’s post, before Benzema missed the target with a spectacular overhead kick five minutes later.

An inventive free kick from Griezmann brought Atletico a brilliant chance to level in the 32nd minute, but Diego Godin, after meeting his teammate’s chipped set piece, could only turn over the crossbar from close range.

It was the visitors that ended the first period on the front foot as they searched for an equaliser, but Ronaldo’s header proved the difference between the city rivals at the half-time break.

Carvajal picked up an injury in the final stages of the first period, and the Spanish international did not emerge for the second 45 minutes, with Nacho introduced as Zidane was forced into his first change of the contest.

A careful and considered start to the second period saw both teams enjoy possession of the ball, but clear chances were at a premium, and Atletico boss Diego Simeone decided to make a double change in the 58th minute as Fernando Torres and Nico Gaitan were both introduced.

Koke had a half-chance for Atletico in the 60th minute after finding space outside the Real Madrid box, but the Spaniard’s low effort was always moving wide of the post during a good spell for the away side.

Marco Asensio for Isco proved to be Real Madrid’s second change in the 67th minute, before Angel Correa replaced Carrasco in Atletico’s third and final substitution of the first leg at the Bernabeu.

Real Madrid struggled to get going in the first 25 minutes of the second period, but the home side had their second of the night in the 73rd minute when Ronaldo instinctively smashed the ball into the back of the net after Benzema had battled for possession on the edge of the Atletico box.

The home side might have scored a third in the 80th minute when Asensio drove down the left before picking out Lucas Vazquez with a brilliant cross, but the substitute could only turn wide of the post.

Ronaldo was not finished, however, and the Portuguese ensured that he completed yet another hat-trick in the 86th minute when he turned a Vazquez cross into the back of the net from inside the Atletico box.

Real Madrid looked for a fourth in the latter stages and came close through Modric, but 3-0 was how it finished as Zidane’s side took a big step towards the 2017 Champions League final.